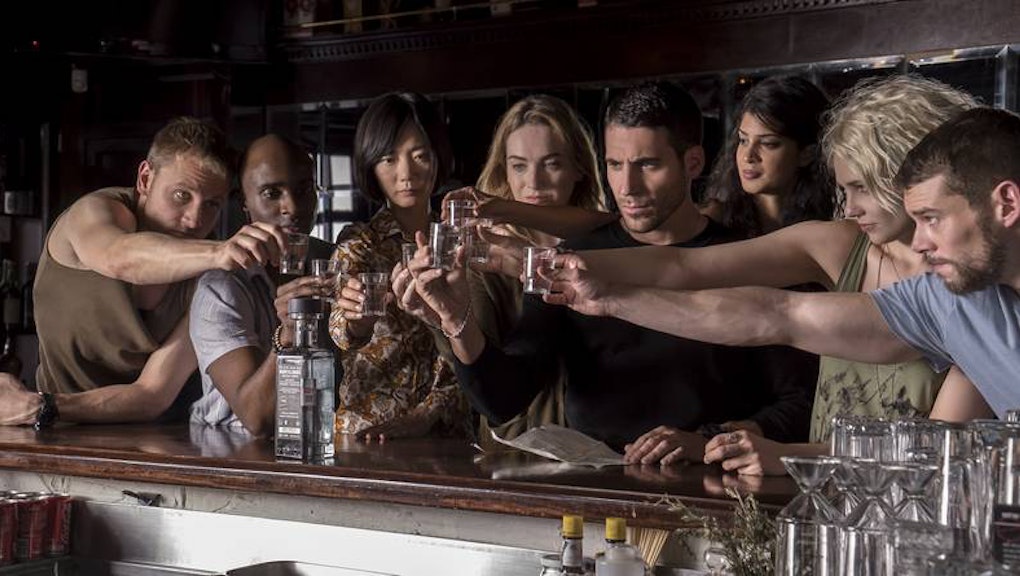 After a second season full of stylish battles, a political rally and Andy Dick, Sense8 remains one of the most maddeningly original shows on the air. Even without her sister Lilly helming the season with her, Lana Wachowski has been able to mount a thoughtful, inventive, moving medley of both car chases and social commentary. The second season left us reeling and wanting more, and we still have questions. So many questions.

1. Wtf is Whispers up to? Like seriously, we should know by now

Netflix promised that season two would focus on the battle between Whispers and the OG sensate cluster, and it delivered — sort of. Although the season began and ended with the sensates cornering Whispers (they kidnapped him in the finale), it still left many issues unresolved. In the very opening scene of the season, it seemed that Whispers was experimenting with controlling sensates for the humans of BPO. Later in the season, however, he told Will that he considered humans a "violent" and "possessive" species, and he was trying to work against them. So what is his endgame with BPO? He was still hunting sensates — and brutally torturing Wolfgang — in the season's final act, so he clearly isn't trying to make nice with his fellow sensates just yet. Is he a lone wolf trying to make the world a better place, using any means necessary?

Thankfully, we had plenty of powerful season two moments to distract us from the long and confusing Whispers/BPO plotline.

2. Will Kala ever leave Rajan?

There's no doubt that Kala has had one of the best character arcs of this show. She started the season wavering between Wolfgang, her true love, and Rajan, her husband from an arranged marriage — but by the end of it, she was a fully-empowered woman blowing up cars in parking garages. At first, it seemed that the show's exposé of Rajan's corporation as a corrupt murder factory was a cop-out to make it easier for Kala to leave him, but her parking garage explosion was proof that she is becoming an active agent in her life. Speaking of Rajan briefly becoming a corrupt corporate robot: The show used this revelation to educate viewers on the drug industry's role in convincing people in the real world to buy defunct medicine. In a time when access to healthcare isn't guaranteed for all, this is a chilling reminder of the rampant corruption among the real world's ruling classes.

Oh, and Wolfgang and Kala confessed their love for each other in the finale. So, like, can she leave Rajan now? It seemed as if she was about to before he sent her off to Paris while he pursued his anti-corruption case.

Ah, Sun and Mun (Does anyone else see "sun" and "moon?"). Midway through the season, they had one of the sexiest martial arts showdowns in modern TV memory. Then, in the finale, Mun seemed ready to take down Sun's brother — but we were left heartbroken when it seemed that Sun's brother had shot him to death.

We learned in a later news segment that Mun was only "injured," but he still isn't in the clear. Is anyone shipping Sun and Mun more than anyone else on this show?

4. Will Sun be exonerated?

Sun also had a great arc this season, with her thrilling jailbreak and badass motorcycle chase in nothing but a bra and glittery shorts. However, despite avoiding jail once again — with a little help from her friends — Sun is still on the run. Hopefully, Mun and his buds will be able to break through her bro's political defenses and put him in jail where he belongs.

5. Will the Kenyan sensates try to stop Capheus?

In the finale, Capheus received a visit from some fellow sensates who had connected with him at his political rally. They were possibly angry and frightened that he and his cluster were putting themselves out in the open and raising the profile of sensates around the globe. Might they try to slow down his campaign in a move for self-preservation?

6. Will Lito and Hernando hit a relationship roadblock?

Lito weathered the fallout from losing his agent and landed a role in a major gay-themed Hollywood movie. Thanks to some wheeling and dealing from Dani, he was cast opposite a charming, hunky, Oscar-winning leading man played by Cheyenne Jackson. In addition to indulging in an intellectual conversation about Lito's movie career, Jackson's character admitted he would "fuck" Lito. Could he come between Lito and Hernando? Or did he just earn himself a spot in the next sensate orgy? When Hernando finds Lito seizing on the floor during Wolfgang's torture, Hernando says he needs to go to the hospital. This suggests that Hernando doesn't know about Lito being a sensate, which could make him feel betrayed when he eventually finds out.

Let's hope that nothing actually happens to these two, because their public kiss at Sao Paolo Pride was the sweetest thing on TV. They then multiplied the sweetness by reenacting a scene from Here to Eternity in Speedos so tiny they'd make Burt Lancaster's jaw drop. Their still-strong love affair, coupled with Nomi and Neet's finale engagement, is a perfect antidote to the anti-LGBTQ rhetoric running rampant in our current administration. Sense8's hopeful queer storylines come at a time when queer love feels revolutionary.

With Lana Wachowski leading the pack, season two managed to make some timely statements about access to healthcare, LGBTQ rights and universal inclusivity. In dark, Trumpian times, Sense8 is the show reminding us that — despite our differences — we should all be working together to make the world a happier place. We want more of that, and soon.