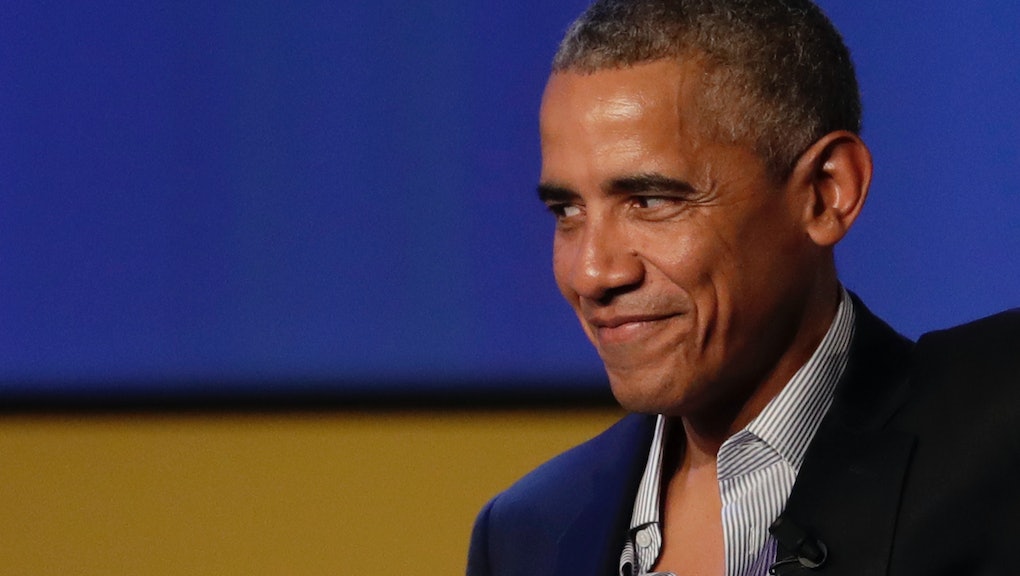 Former President Barack Obama addressed a sold-out crowd Tuesday at the Global Food Innovation Summit in Milan, an event aimed at confronting the challenges of "climate change and the issues linked to food supply in an increasingly populated world with progressively scarce resources."

While Obama has long been a proponent of food security and protecting the environment, President Donald Trump's administration continues to deliberate whether the United States will remain committed to the COP21 Paris climate agreement.

During his keynote remarks, Obama directly addressed the subject of the Paris agreement, saying it had not so much solved climate change as it had "put together the architecture, the mechanism where each year, each country could progressively do more to reduce its carbon emissions."

"Now, I think it is important that big countries that are big emitters, like the United States and China, as well as Europe, we have to lead the way," Obama continued, noting it wasn't fair for rich western countries — who developed with the use of dirty energy — to look to poor emerging countries to slow their own growth in the interest of "saving the planet."

"Everybody has to do something, but you are right that countries like the United States have to show leadership," he said.

First signed in December 2015, the Paris agreement represented a commitment by nearly 200 countries to reduce greenhouse gas emissions to sustainable levels by 2100. During a panel portion of his remarks on Tuesday, Obama said the deal represented an important signal to the global community at large.

"The key to getting the Paris agreement was the deal that I was able to make with President Xi where China, the largest emerging country, and the United States, the largest advanced country, the two largest carbon emitters came together and said, 'We're going to do something now, that takes away the excuse for everybody else who may not,'" he said.

On the same day as Obama's remarks, Trump advisers scrambled to postpone a scheduled meeting to discuss whether the U.S. would, in fact, withdraw from the Paris agreement. Although Trump vowed to pull out of the pact during the 2016 presidential campaign, growing skittishness from businesses and foreign leaders over the U.S.'s commitment to curbing emissions has caused infighting within the Trump administration, the Guardian reported.

If Obama has been any kind of thorn in Trump's side on the issue of climate change, it's unlikely he'll be going away anytime soon. As CNN noted, the former president has more speaking engagements on the books, including one in the United Kingdom just days before Trump is due to appear in Sicily for the G7 summit.