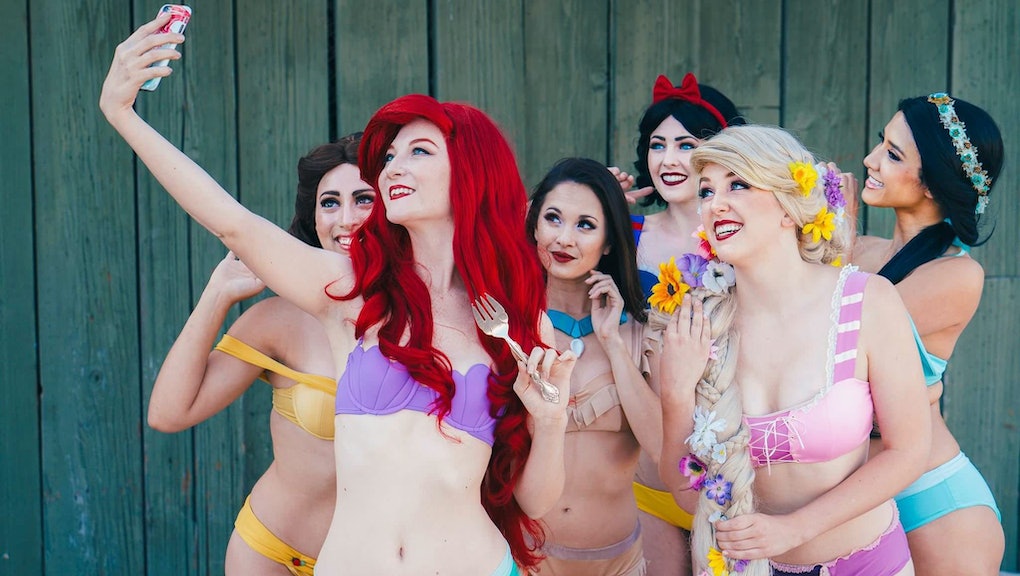 Grown-ass women can't get enough of princess fashion. Here's the bizarre reason why.

Once upon a time, in a land far, far away, you dre amed of becoming a princess.

Now you're a grown woman and you still want your own happily ever after. But this time around you don't care about castles, fairy godmothers or even charming princes: you just want a Princess Jasmine two-piece, a Beauty and the Beast tracksuit and a set of Snow White lingerie.

Disney princess fashion is inescapable, from the Met Gala to Hot Topic. But what's brought the dream back to life for adult women?

For Sina Faton, when she dresses like a Disney princess, she doesn't just look like Belle or Ariel or Jasmine — she feels like one of them.

"It's a motivational feeling," Faton, whose swimwear line Enchanted Bikinis offers women the chance to channel classic characters like Snow White and Pocahontas with princess-themed swimwear, told Mic. "We all know that most girls have wanted to be a princess at some point in time... this dream never goes away."

Faton is not alone. Wide-eyed, small-waisted princesses are popping up everywhere, declaring that It's Not Easy Being a Princess on a pair of Primark pajamas and chilling together as the ultimate in #squadgoals on an Asos slogan T-shirt. Belle and Ariel makeup tutorials rack up millions of views on YouTube, while Leslie Kay teaches followers how to low-key dress up as Disney characters on her popular DisneyBound blog.

Yup, millennial nostalgia has moved way beyond the realm of online personality quizzes and imagining what Snow White and Pocahontas might wear to Coachella.

This is big business. Disney started selling princess-themed merchandise in 2000, primarily targeting kids, and now boasts a princess business worth billions of dollars.

Fashion brands both high- and low-end have also leaned into the princess trend to bring our longing for giant eyes and glass slippers to life, from Dolce & Gabbana "Dreaming of My Prince" dresses that retailed for thousands of dollars to Uniqlo's "Once upon a time lived a princess" T on sale for $9.90.

And while teens and young women not long out of childhood might feel close enough to those innocent days to still rep their favorite princess, how do we explain the fairytale fascination for women in their 20s and 30s?

"Millennials invented the word 'adulting' to capture their ambivalent attitude toward adult responsibilities and their nostalgia for their relatively pampered and optimistic childhoods," psychologist Jean Twenge, whose book Generation Me explores the inner workings of our generation, said in an interview.

And who could blame us for wanting to escape the reality of being an adult? We earn 20% less than our parents did, rent consumes up to about half of our monthly income and the idea of ever owning our own home seems like a distant dream.

Coming of age during the financial crisis might have left us with little choice but to exist in a period of extended adolescence, but we've since decided to wholeheartedly embrace our identity as what sociologist Kathleen Shaputis termed the Peter Pan generation with our unicorn hair, mermaid shoes and old school sportswear.

"Disney, and their princesses, were a huge part of many millennials' youth, and they do hold on to their love of them. Through clothing, they can express that ongoing enjoyment of these characters. We also know that this generation has a reputation for wanting to hold onto childhood and not grow up. These types of clothes allow for that, as well," psychologist and author of Princess Recovery Jennifer Hartstein said in an interview.

And then there's social media

"People are very much influenced by what they see on social media, and there is a lot of princess inspired fashion populating Instagram feeds around the world right now... Millennials are definitely on a nostalgia trip — myself included!" Katie McBroom, fashion and beauty blogger at Martinis and Mascara and retired Disney princess, said in an interview.

She's right. There are almost 2 million #disneyprincess posts on Instagram, Disney cosplayer and Selena Gomez lookalike @valblues has over 50,000 followers on the platform and princess memes on every topic from coffee to hangovers are widely shared on Pinterest and Tumblr.

While there's nothing wrong with a little nostalgia (what else would we use Tumblr for?), there's no denying that the princess ideal can be pretty problematic.

Research has indicated that exposure to the heroines of these happily ever after stories can lead young girls to adhere more strictly to gender norms, suffer from low self-esteem and become more preoccupied with physical beauty.

Psychologist Hartstein pointed out that these messages don't just disappear as we get older and can still impact our adult brains.

"Some of the messages that the princess culture supports is the idea that appearance matters over brains (this is changing in some of the recent princess culture, but not for many of the princesses millennials look to), rescuing by others over saving themselves and the like. When those messages are taught at a young age, many of them get brought into adulthood," she said.

Yet millennial women have grown up aware of the feminist struggle and we're as likely to wear a T-shirt declaring ourselves FEMINIST as one inspired by a fairytale. So what gives?

"Although it's true that young people in this generation are among the first to see gender as fluid and to use words like 'heteronormative,' those individuals are a small minority. In a paper last year we found that millennials are more supportive of working mothers, but there has not been much progress in flexibility around gender roles," Twenge said.

"Overall, gender norms still seem normal to them, though they acknowledge that for economic reasons both parents may have to work. So millennials are still attracted to the idea of the prince who saves the princess."

"It's not all bad, though. Sometimes, we just enjoy staying connected to things in our past that have made us happy or bring us positive memories," Hartstein said.

There's nothing wrong with embracing a little of the magic of princesses, especially if it makes you feel happy.

"I have many readers and friends that have embraced this trend. Most do it for fun and find joy in the creative aspect of it," McBroom said.

But maybe we could be a little bit more woke in our choice of princesses to celebrate (starting with ones who are actually awake for the movies they star in?) or we could head over to Redbubble or Etsy for some feminist-inspired Disney merch.

"Our goal is to empower women by giving them the opportunity to look like a princess and the confidence to feel beautiful, so they can embrace who they are," Enchanted Bikinis' Faton said.

You do you, princess.