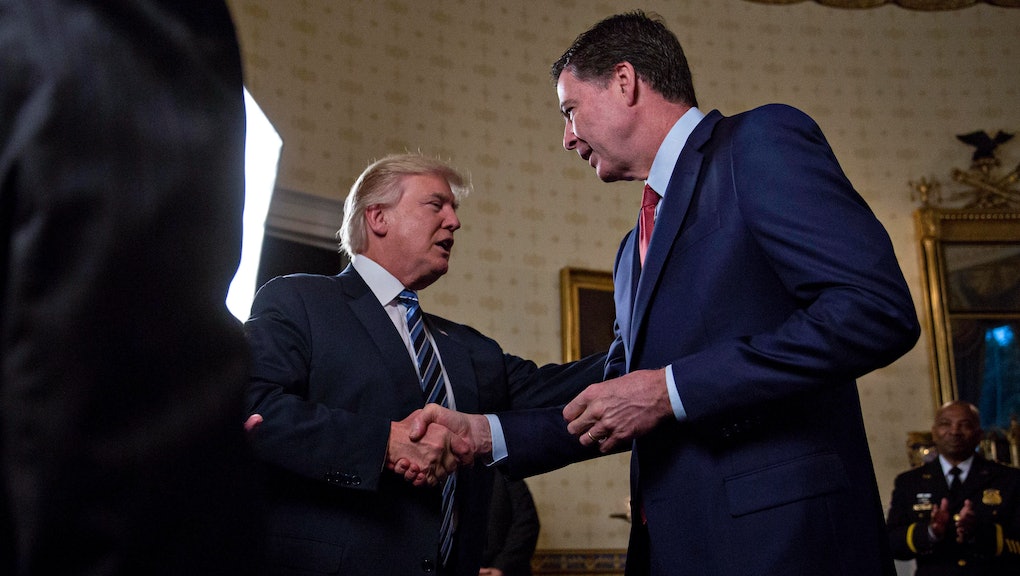 In tone-deaf tweet, Trump says everyone "will be thanking" him for firing Comey

Amid a firestorm of speculation that he fired FBI Director James Comey in order to stymie an investigation into his campaign's possible ties to Russia, President Donald Trump let off a tone-deaf series of tweets about Democrats Tuesday night and Wednesday morning, ultimately saying the country "will be thanking" him for letting Comey go.

Trump began his Twitter tirade on Tuesday night, slamming Senate Democratic Leader Chuck Schumer (D-N.Y.) for being upset over Comey's firing despite the fact that Schumer has said he had no confidence in Comey's leadership.

"Cryin' Chuck Schumer stated recently, 'I do not have confidence in him (James Comey) any longer.' Then acts so indignant," Trump tweeted, adding the signature hashtag #draintheswamp.

However, Schumer's statement about not having faith in Comey came on Nov. 2, right after Comey issued his now infamous letter regarding finding Hillary Clinton emails on Anthony Weiner's computer. Since that time, Comey publicly revealed that the FBI is also investigating the Trump campaign — meaning Trump has now fired the FBI director who was investigating Trump's inner orbit.

Trump doesn't acknowledge that Democrats can both think Comey did a bad job with the Clinton email investigation and think it's a bad idea for Trump to fire the same FBI director who is probing the Trump campaign. "We're not defending Comey," former Clinton campaign chief Robby Mook tweeted. "We're calling out Trump for trying to block Russia probe."

In a second tweet that came early Wednesday morning, Trump simply said, "The Democrats have said some of the worst things about James Comey, including the fact that he should be fired, but now they play so sad!"

Trump concluded his tweetstorm by saying that he'll replace Comey with, "someone who will do a far better job, bringing back the spirit and prestige of the FBI," adding, "When things calm down, they will be thanking me!"