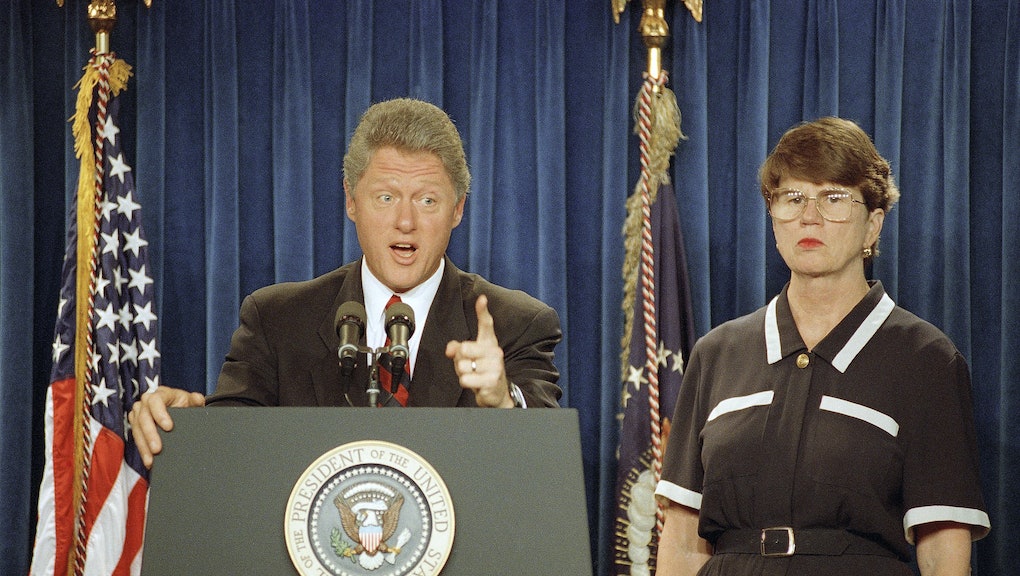 One other president has fired an FBI director. It was Bill Clinton.

President Donald Trump's firing of FBI Director James Comey on Tuesday was a monumental action — but it wasn't the first time a president let his FBI head go.

Before Tuesday, the only president who had fired an FBI director was Bill Clinton, who fired former FBI Director William Sessions in July 1993.

"We cannot have a leadership vacuum at an agency as important to the United States as the FBI," Clinton said in a statement at the time. "It is time that this difficult chapter in the Agency's history is brought to a close. With a change in management in the FBI, we can now give the crime fighters the leadership they deserve."

While the Trump administration reportedly spent a week trying to justify Comey's firing, the reasoning behind Sessions' dismissal were all too clear.

The Republican FBI director, who was first appointed by former President Ronald Reagan in 1987, was lauded for championing women and minorities in the FBI, the New York Times noted upon his firing.

But his tenure soon became mired in scandal. A 161-page report from the Department of Justice's Office of Professional Responsibility, the New York Times reported, revealed Sessions had abused his power and federal funds in a number of ways, including taking free trips on the FBI's aircraft to visit family and friends and building a $10,000 fence with government money around his home that "provided no security."

Because of the report, then-Attorney General Janet Reno requested that Sessions voluntarily resign from his position. When he refused, Clinton ultimately decided to let him go.

Another key difference between Comey and Sessions' dismissals: Unlike Trump's reported week-long deliberation on Comey, Sessions' firing was months in the making.

Though Sessions wasn't ousted until the Clinton administration, the Office of Professional Responsibility actually began its investigation of the FBI director during the last year of President George H.W. Bush's administration, according to the LA Times. Upon taking office, the LA Times reported in 1993, Reno was told by Republican acting Attorney General Stuart Gerson that Sessions "had exhibited flawed judgment which had an adverse effect within the FBI."

Gerson wasn't the only attorney general to complain about the FBI director. The New York Times reported that all four attorneys general under whom Sessions had served complained privately about "his absentee management style, his frequent traveling — often to unimportant events — and his inability to take command."

Reno didn't simply rely on these past accounts, but waited to take action until she had made her own independent assessment of the FBI director, the LA Times reported. Sessions was finally dismissed a full six months after the Office of Professional Responsibility report was released, giving Reno ample time to review the findings and Sessions' leadership.

Clinton, too, was hesitant to fire Sessions. The New York Times reported in 1993 that the then-president "seemed to regret" having to use force to oust Sessions, saying he had hoped the issue could be settled through the Justice Department.

The reason for these thorough deliberations and hesitancy, it seems, was so that Sessions' dismissal couldn't be interpreted as a partisan act of political misconduct — as Trump firing Comey is being seen today.

"Both [Reno and I] agreed that in the normal course of events, the Director of the FBI should not be changed just because administrations changed, even when, perhaps even especially when, there's a change of political party in the White House," Clinton said in 1993 when asked if dismissing Sessions could be seen as a politicized act. "So the Attorney General was very deliberate, very thorough in this, and I think has gone out of her way to avoid the appearance of political impropriety."