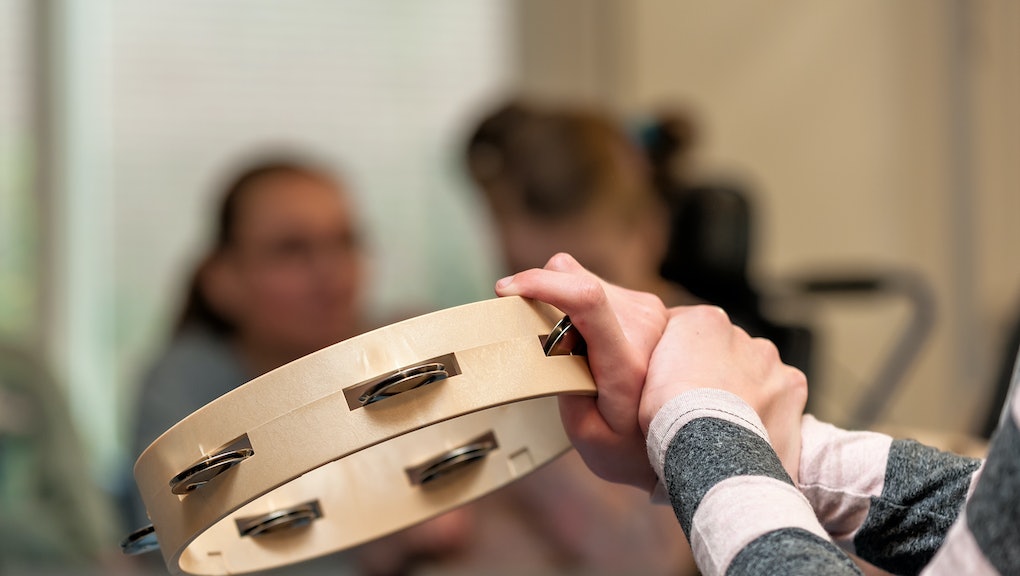 Here’s how music can help to heal the mind

Several times a year, George Mixis wanders the hallways of the Phoenix-based Barrow Neurological Institute strumming tunes on his guitar. He walks past the unit's 35 patient rooms at the Dignity Health facility, where he is employed as a maintenance worker, seeing which ones have open doors and inviting ears. Mixis is careful not to push his music on anyone, but he'll perform an intimate, impromptu concert for any welcoming patients and their visitors.

In a recent conversation, Mixis recalled poignant moments of healing his music helped to provide, such as the time a teenager with impaired motor skills brought tears to his mother's eyes when he sang along with Mixis, and the days when Mixis's own wife, a fellow guitarist, had been hospitalized for a stroke but brightened whenever her husband brought in his guitar.

"Music is a vehicle that affects people," Mixis said. "It's the music, and it's the sharing. They go hand in hand."

Call it "the healing power of the arts," as Luann Williams, manager of therapy services at Barrow Neurological Institute, put it in an interview. "There's such an impact that music has on the body."

For the past several years, Williams has encouraged anyone with a knack for music — whether a staff member with a musical passion or a college band from nearby Arizona State University — to come play for patients and families at the facility. Barrow is just one of many facilities and programs that use live music to improve the quality of life, not only for patients but their caretakers and family members, as well.

Your brain on music: Although music therapy as a clinically focused profession only came about in the 1950s, the notion that music can heal is probably as old as humanity. Beyond anecdotal evidence of its ability to soothe, research has found that playing and listening to music activates different neural networks in the brain and causes neurochemical changes.

According to research at McGill University, music stimulates the same naturally occuring opioids involved with pain relief and sexual arousal. In the study, half of the subjects took an opioid blocker and the other a placebo before listening to four songs: two of their favorite songs and two neutral, researcher-selected songs. Those on the opioid-blocker reported being less enthused than usual, suggesting a correlation with the pleasure we derive from music. Music also activates the nucleus accumbens region in the brain, which is related to dopamine and addictive behavior.

But music does more than make us feel good — it can help the healing process. Some studies have found that for postoperative patients, passively listening to soft music led to lower amounts of serum cortisols, the hormones involved in our fight-or-flight response that make us feel stressed.

A collaborative study between the Huger Mercy Living Center (part of Dignity Health St. Joseph's Hospital and Medical Center in Phoenix), Arizona State University and the Phoenix Symphony further explored this health benefit. The program at Huger Mercy examined if and how music can impact stress levels of those who live with Alzheimer's — both those afflicted by the illness and those who care for them. Throughout the study, the nurses from ASU used biomarkers to test the cortisol levels of the patients, their caretakers and the patient's family members.

Although the results are preliminary, the data show that patients, family and staff members experienced positive mood increases, less frustration and greater calmness after the performances. Night nurses who were interviewed by the researchers reported that the patients showed less physical agitation and disruption on concert days. "It connects to their mood," said David Coons, associate dean and professor at ASU who led the study. "It connects to an increased quality of life in connection with others."

"These connections can make life better for everyone," added Lisa O'Toole, manager at Huger Mercy Living Center and St. Joseph's Hospital & Medical Center. "It's a win-win, and that's what we're striving for here."

Music and memory. The performances at Huger Mercy were intimate and interactive, with musicians standing mere feet from their audience and taking cues from their reactions. Music therapy graduate students from ASU helped train the musicians to interact with the audience and encouraged participants to play instruments, such as drums, alongside the professionals.

"That kind of interaction and closeness and movement really seems to grab their attention," said Dian D'Avanzo, a violinist with the Phoenix Symphony who has performed at Huger Mercy. At first, the patients — many of whom suffer from short-term memory loss — were disoriented. But as the weeks progressed, some appeared to comprehend and even remember the musicians. To the surprise of their loved ones, some would sing, conduct or even dance along.

Though she isn't a patient, Kathy Heitzmann can attest to music's healing powers. Her mother resides at Huger Mercy under care for age-related dementia. "When you have a parent or a loved one who is suffering from dementia, it's very difficult to adapt to what is needed — to even just visit with them," said Heitzmann in a phone interview. The memory loss, the constant repetition and misunderstandings can be exhausting for caregivers, including professionals. "You really have to go in there feeling relaxed," she added.

Heitzmann said the sessions put her in a "better space" when visiting her mother and even improved their relationship, adding, "I think no matter what culture you're from, music can connect us, as it can connect people who are losing themselves."