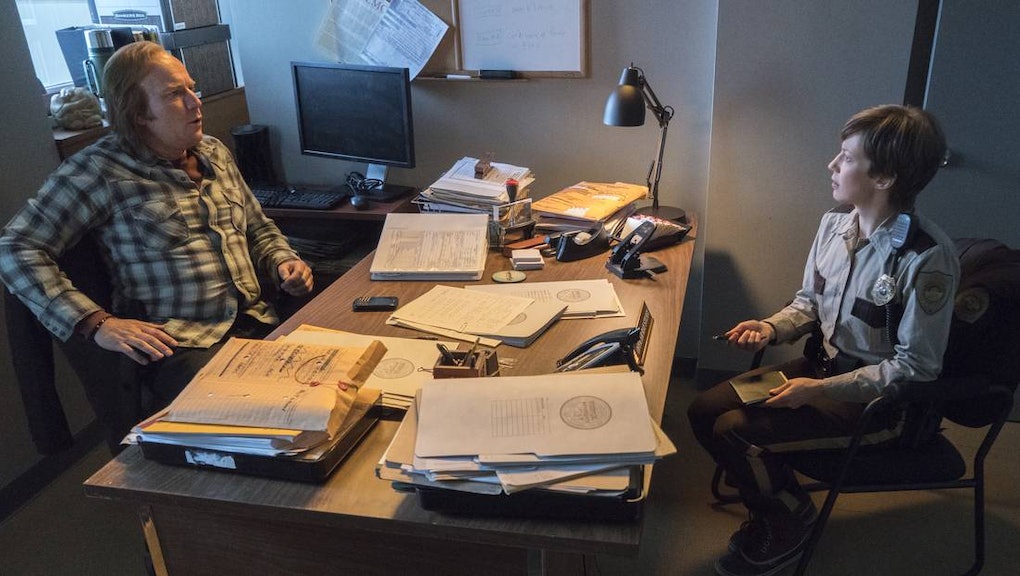 'Fargo' season 3, episode 4 brings back a season 1 actor for a retelling of 'Peter and the Wolf'

Let's give credit to the third season of FX's Fargo: It certainly hasn't been afraid to shake things up. We've already spent some time on the West Coast exploring Ennis Stussy's past life as an aspiring science-fiction writer, complete with some stunning — albeit, super-depressing — animation. Nearly an entire episode without the icy tundra of the Midwest, plus a sardonic take on Los Angeles, is stretching the limits of the Coen brothers' pastiche. Three seasons into the series, I mean this as a good thing.

The fourth episode of season three, "The Narrow Escape Problem," is equally ambitious in crafting a Fargo-ian tale. Unfortunately, it sounds better in theory than it is in execution.

Fargo brings back a familiar voice from season one: Billy Bob Thornton, whose chilling performance as hitman Lorne Malvo earned him an Emmy nomination. But note the voice. Thornton is actually back as a guest narrator for the episode, which intends to emulate the Sergei Prokofiev children's fable Peter and the Wolf.

A brief explainer on Peter and the Wolf: It's a story about a boy named Peter, who encounters a bird, a duck and a cat while wandering through nature. His grandfather warns him not too drift too far, as there's also a dangerous wolf in the area. Peter eventually encounters the wolf, which swallows the duck and threatens the cat and the bird. Peter catches the wolf and, instead of having it killed, asks hunters to send the animal to a zoo. All the while, the duck quacks inside the wolf's belly. It's a pretty straightforward tale that doubles as a musical composition, wherein one instrument takes the form of a character. For instance, the villainous wolf is cued by the sound of a French horn.

With "The Narrow Escape Problem," Fargo intends to place its own characters with the same musical cues. As you might expect, the creepy business mogul V.M. Varga plays the wolf and is represented by horns, while Gloria is Peter; Emmit is the bird; Ray is the duck; Nikki is the cat; and Sy is the grandfather. Thornton is there to explain everything.

But the actual story of Peter and the Wolf doesn't mesh well with all the Fargo characters. Yes, Varga makes a great wolf, even more fitting since David Thewlis' Harry Potter character turned into a werewolf. However, it's a curious choice to have Ray as the duck and Emmit as the bird. It's Emmit whose business is being enveloped by Varga's mysterious operation, about which we still know very little. If anyone's getting swallowed whole, it's Emmit, not Ray. Ray and Varga haven't even shared the screen together — although technically, a double-duty Ewan McGregor has! It's much ado about birds and ducks, but this stuff matters.

As for the musical cues, they're rarely utilized, rendering it as ineffective window-dressing on the story. If showrunner Noah Hawley went all in, with minimal dialogue buoyed by dramatic crescendos between the characters and their respective instruments, we'd be going somewhere. It's telling that the musical cues are most apparent at the beginning and end of "The Narrow Escape Problem," when Thornton is there to remind you the story is allegorical.

Maybe it is allegorical on a macro level for season three. Maybe Ray will be consumed by the end of the season; Varga does ask Emmit if his sibling rivalry will pose a problem for their partnership, and while Emmit assures him it won't be a problem, could it? You betcha! Gloria, our Peter equivalent, is getting closer to the truth behind Ennis' unsolved murder and the Stussy connection to Maurice LeFay, which should eventually lead her to Varga.

Did we need Peter and the Wolf to get us here? Evidently not. Season three has repeatedly harkened back to the theme of mistaken identity from the series' cold open, and how it can create a butterfly effect that impacts so many lives. Indeed, after a week in California and a frail attempt at mimicking a symphonic children's fable, perhaps Fargo is having its own identity crisis.