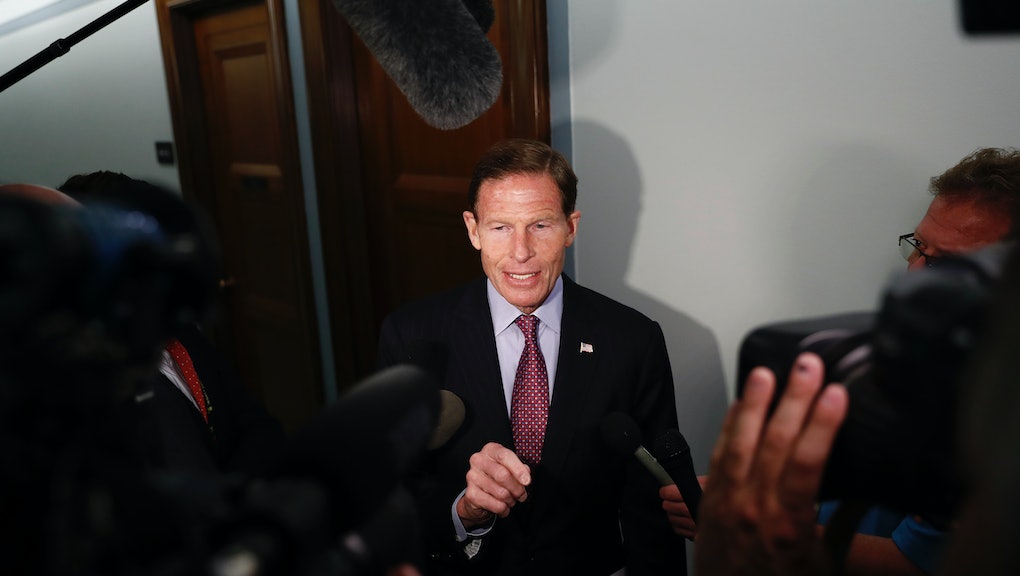 If the FBI can't get to the bottom of Trump-Russia ties, this senator will get answers

Sen. Richard Blumenthal's patience with the Department of Justice is stretched thin. That's why the Democratic senator from Connecticut is now saying that if the department does not appoint a special, independent prosecutor to investigate alleged ties between President Donald Trump's campaign and Russia, he will introduce legislation to make it happen.

In an interview with Mic on Wednesday afternoon, Blumenthal said his bill would pull from a Watergate-era law that, in this case, would allow for the creation of a three-judge panel to appoint a special prosecutor to investigate the matter.

"This whole procedure sound like a lot of legalese, but it's important to the future of our democracy," Blumenthal said. "What's at stake here is the integrity of our justice system."

Blumenthal has emerged as one of the most outspoken critics of the handling of the Trump-Russia investigation. He was the only member of the Senate Judiciary Committee to vote against the confirmation of Deputy Attorney General Rod Rosenstein.

With Attorney General Jeff Sessions recused from overseeing any investigations into Trump and Russia, Rosenstein is in charge of those inquiries. During Rosenstein's confirmation hearing, Blumenthal asked if he would commit to appointing a special prosecutor to investigate Trump-Russia accusations. Rosenstein said he would not. Blumenthal voted his conscience.

Rosenstein's credibility has been called into question by his involvement in the dismissal of FBI Director James Comey on Tuesday night. Comey reportedly asked Rosenstein for more money to investigate Trump shortly before he was fired. While Trump pushed for Comey's ouster, Rosenstein played a key role in the firing by writing a detailed account of why Comey should be removed. (Rosenstein threatened to resign on Wednesday, but did not follow through.)

Blumenthal, a former attorney general of Connecticut, has experience determining whether a special prosecutor is needed. "There were times, when I was attorney general, where I felt I had a personal conflict of interest ... and we used outside counsel," he said. Blumenthal said the Justice Department has rules that govern when to appoint a special prosecutor, noting that "the present situation is well within those rules."

Blumenthal has been a target of Trump since Comey was fired. After Blumenthal said on CNN that Comey's firing triggered a "constitutional crisis," Trump tweeted that Blumenthal "devised one of the greatest military frauds in history," referencing a gaffe Blumenthal made during his 2011 Senate election in which he mischaracterized his military service record. The senator apologized.

On Wednesday, he wouldn't take the bait. "The bullying distractions are not going to silence my call for an independent special prosecutor, because this issue is not about me," Blumenthal said.

Blumenthal showed he will not be deterred by bullying tactics when, that same day, he told CNN that the Russia investigation "may well produce impeachment proceedings." Trump has yet to respond.