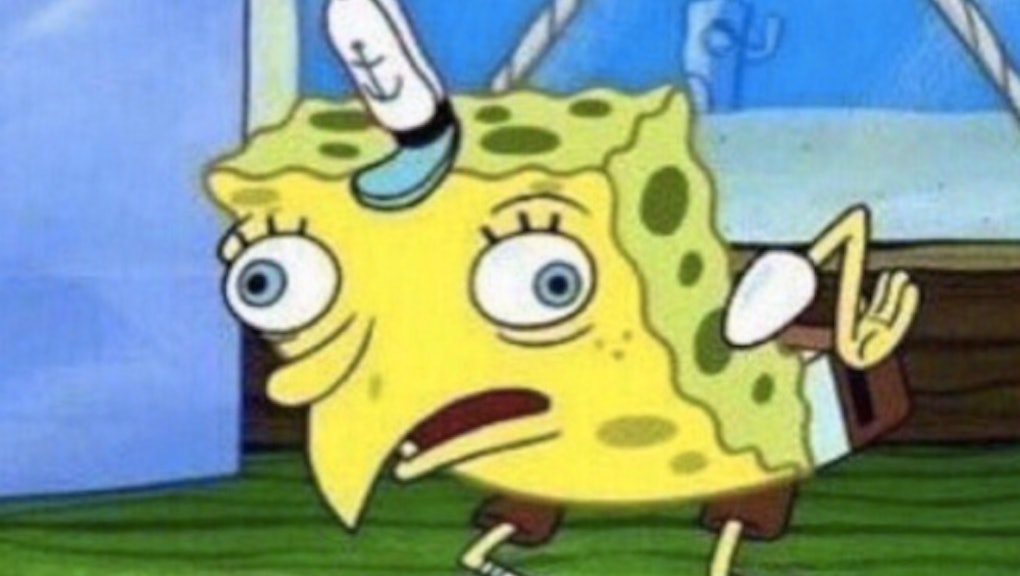 Democracy is dying in the United States, but all we can do is gape, slack-jawed and goggle-eyed, as it slips away forever. Behold the new SpongeBob SquarePants meme.

"Mocking SpongeBob," casually known as the SpongeBob chicken meme, is far from the first meme derived from the classic Nicktoon SpongeBob SquarePants, and it won't be the last.

Fondly remembered by the millennials who grew up watching it — and marked by versatile, occasionally grotesque animation — bits and pieces of the series have come to serve as familiar signifiers for people who can't stop scrolling through Twitter. There's Blurry Mr. Krabs, who captures the sense of being caught out or put on the spot; there's Surprised Patrick, for life's most shocking moments; and there's Handsome Squidward, who just makes you feel weird.

None, however, reaches the level of trash of Mocking SpongeBob.

The "SpongeBob chicken" episode that started it all

As with these predecessors, Mocking SpongeBob's TV origins are basically irrelevant to his function on social media. According to Know Your Meme, he comes from the episode "Little Yellow Book," in which Squidward reads SpongeBob's diary and discovers that whenever SpongeBob sees plaid, he involuntarily begins to act like a chicken. Much amusement there.

In meme translation, though, the fowlish quality of SpongeBob's contortions isn't important. When @OGBEARD posted the still frame on Twitter a week ago, it was to describe his imitative response to openly gawking children.

Right from the start, then, "SpongeBob as a chicken" became "SpongeBob affecting a taunting, juvenile mimicry." It was only a short jump to the next phase: The repetition of whatever someone else says in aLtErNaTiNg CaPs, the typographic equivalent of the big-dumb-idiot voice that every kid loves.

The dark side of the Mocking SpongeBob meme

Of course, anyone who's been through middle school knows that the exaggerated voice in play here has dark roots. Indeed, before the recent wave of call-and-response memes, this SpongeBob image was most often used in offensive jokes made at the expense of "special ed" or autistic kids. Plenty of people today think of him as "Retarded SpongeBob," with others finding the meme problematic for exactly that reason. Which is how this happened:

The above is as apt a summation of the current discourse as you're likely to see. Everyone in America has chosen a stance on every issue, no matter how inconsequential, and if someone offers the opposite opinion, we project it back at them with sneering sarcasm.

The subtext of Mocking SpongeBob is the widespread failure of empathy that colored our schoolyard days: The people you disagree with or don't understand aren't merely wrong, but morons, and it's impossible to adopt their point of view without shedding 50 IQ points.

And in a polarized political climate where any whiff of malfeasance is met with the canard that "both sides do it," where President Donald Trump and his lackeys accuse everyone else of all the unethical stuff he does himself, where "I know you are, but what am I?" is a rejoinder we can well imagine hearing on the floor in Congress and those who express disagreement are are "triggered" or a "snowflake"... well, what other meme would do?

Any path forward as a nation is blocked by sheer immaturity, so we meet it with more of the same.