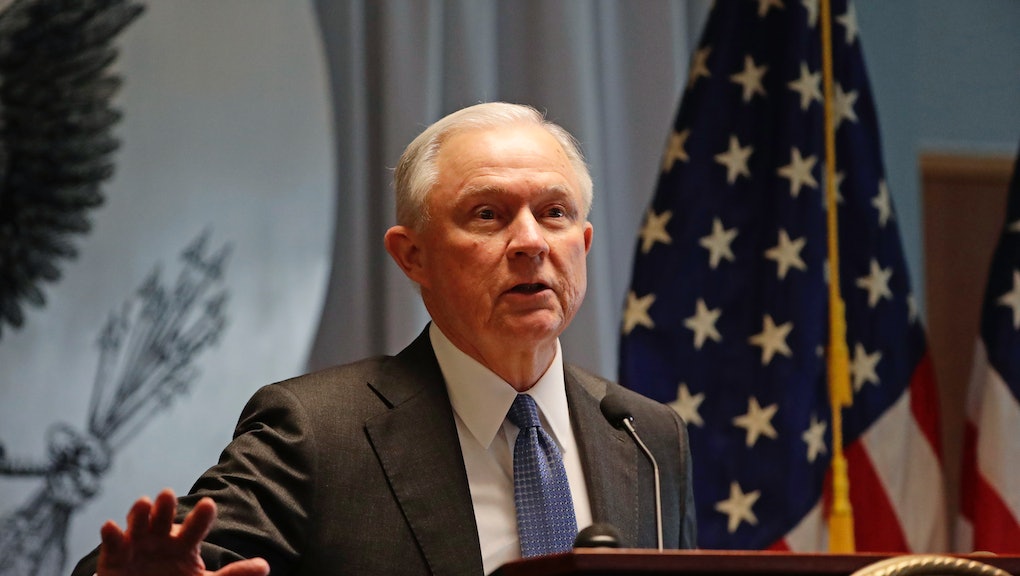 On Thursday, attorney general Jeff Sessions reversed a course set by his predecessor, Eric Holder, and directed federal prosecutors to charge defendants with the most serious crimes they could prove that carry the harshest penalties, the Washington Post reports.

Sessions' memo reverses that. The two-page memo sent to 5,000 assistant U.S. attorneys ordered its recipients to rescind Holder's policy and "charge and pursue the most serious, readily provable offense."

Sessions memo backs up Trump's campaign promises of a "law and order" presidency.  In April, Sessions indicated he would support the president in his endeavors to support "effective local policing" by ordering a review of all police reform agreements from the Department of Justice nationwide.

"This policy fully utilizes the tools Congress has given us," the attorney general's memo says.

Sessions' memo also flies in the face of what has been a bipartisan effort to reduce the prison population and put a dent in the United States' mass incarceration epidemic. In October 2015, Republican Sen. Chuck Grassley introduced the Sentencing Reform and Corrections Act, which is still an active Congressional bill. The same month, a group of 130 current and former police chiefs, prosecutors and attorneys general from all 50 states called for a reform in drug sentencing law.

In February, Sessions reversed an Obama-era directive that the federal government phase out private prisons as a repository for federal prisoners. When Obama first wanted to phase out prisons, deputy attorney general Sally Yates said the move was possible because of declining prison populations.

According to the Post, Sessions said the move "impaired the [Bureau of Prisons'] ability to meet the future needs of the federal correctional system," indicating the number of prisoners could likely increase in the future.

Sessions has repeatedly misunderstood the modern drug epidemic and its intimate ties to mass incarceration. He's made repeated references to "thugs" and "gangs" as being the root cause of the U.S. drug epidemic, and touted the benefits of a 1980s-style "War on Drugs." However, emphasizing crime de-emphasizes the role that the over-prescription of opioid painkillers plays in the American drug epidemic.