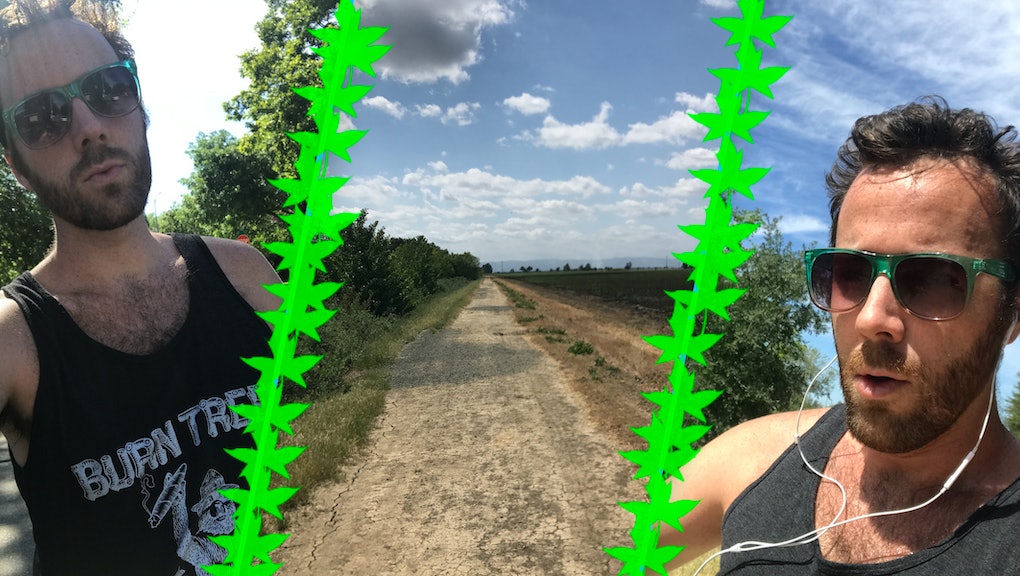 Can marijuana actually help you exercise? I got high and ran 6 miles to find out

Athletes are always pushing themselves to go harder, faster and higher. One company wants to help them do just that — with marijuana chocolates.

No, really: 1906, a startup founded by former Wall Street banker Peter Barsoom, is in the business of creating cannabis edibles that "appeal to responsible, informed, health-conscious adults," per their mission statement. These include a line of weed chocolates for sleeping ("Midnight"), relaxation ("Pause") and even sex ("High Love"). Each contains a specific blend of all-natural ingredients meant to achieve ideal effects for a different activity.

But the most curious offering from 1906 is "Go," a cannabis chocolate crafted with exercise in mind. It promises to "provide the extra energy you need to stay at your physical peak." Was such a thing possible? I decided to find out.

How marijuana and exercise go together

As more and more people try marijuana, for a wider variety of reasons, the stereotype of the lazy, couch-bound stoner has somewhat faded. And while the idea of adding cannabis to your workout routine still seems somewhat counterintuitive, it's gradually gaining acceptance.

While the idea of adding cannabis to your workout routine still seems counterintuitive, it's gradually gaining acceptance.

"Emerging science and increasing anecdotal evidence suggest that cannabis is a performance-enhancing drug," 1906 founder Barsoom said in an email. The U.S. Anti-Doping Agency agrees with this assessment: Marijuana and cannabinoids are banned in Olympic sport partly due to the unfair advantage they may give an athlete. Here's how's the organization explains it:

While the effects of marijuana can decrease hand-eye coordination and distort spatial perception, there are other effects that can be performance-enhancing for some athletes and sport disciplines. Cannabis can cause muscle relaxation and reduce pain during post-workout recovery. It can also decrease anxiety and tension, resulting in better sport performance under pressure. In addition, cannabis can increase focus and risk-taking behaviors, allowing athletes to forget bad falls or previous trauma in sport, and push themselves past those fears in competition.

That's precisely the edge Barsoom wants his customers to enjoy during their own workouts. "When you ingest marijuana — whether via smoke, vape or edibles — its chemical compounds, or cannabinoids, combine with your brain and body's receptors that regulate pain, emotions, appetite and memory," he said, and he's right: The receptors he refers to make up the endocannabinoid system, which plays a crucial role in regulating your overall homeostasis, or biological balance. Typically, this network is influenced by endocannabinoids, signaling molecules produced within the body — but, as the name suggests, it's also receptive to the cannabinoid compounds found in (and extracted from) marijuana.

Since experiments have shown that hard exercise results in a flood of endocannabinoids and may even be responsible for phenomena like the so-called "runner's high," it stands to reason that ingesting cannabinoids could give us an extra boost when we're working out. By mimicking the physiological reaction to exercise, marijuana might help us get into the zone.

What it's like to work out on cannabis chocolate

With the sun beating down, my heart thumping and one earbud constantly slipping out, I kept putting one foot in front of the other — until I wasn't thinking about it. At some point while running on weed, everything seemed to click.

When I got the chocolates, I was more than ready to give them a try. Delivered on a particularly hot day, they'd melted a fair amount; I popped them in the freezer for a while so they could re-solidify.

Once I could eat one of the angular chocolates without making too much of a mess, I got my running gear on. It just so happens that long-distance runners are among the athletes most bullish on the use of cannabis in training, with many willing to go on the record about how it helps them focus and maintain stamina. I've only been running for about a year myself, and lately, with the weather heating up, I was struggling to run more than 5 miles at a time without feeling totally spent. The idea of a weed candy that would make it easier — or even fun — was very appealing. And the chocolate itself tasted great, like a gourmet confection, without the weed aftertaste you notice in some edibles.

The idea of a weed candy that would make running easier — or even fun — was appealing. And the chocolate itself was great.

After stretching, it was time to hit the pavement. I knew better than to expect any immediate effects; edibles have to be metabolized, so unlike smoking or vaping, there's a significant lag between consumption and the high. Besides, 1906 chocolates aren't all that strong: Each one contains 5 milligrams of THC (tetrahydrocannabinol, the psychoactive chemical in cannabis that accounts for the sense of being "stoned") and 5 milligrams of CBD (cannabidiol, a non-psychoactive compound prized for its anti-inflammatory and other medical applications).

Given these low amounts of cannabinoids, as well as their 1:1 ratio — CBD is thought to counteract some of THC's more extreme effects — the "Go" chocolate might be considered a "microdose" of cannabis, just enough to deliver subtle benefits without overwhelming your system.

Still, I didn't have long to wait. Barsoom claims that "Go" is the "fastest-acting edible on the market," its effects noticeable within 15 minutes, as compared to the hour-plus it can take other edibles to kick in. On top of that, I use marijuana with enough regularity to presume that there are extra cannabinoids stored in my fatty tissues, and as my body metabolizes this fat during a run, more THC and CBD are released into my bloodstream. In that sense, I feel a little high whenever I run, solely from residual cannabis compounds.

I feel a little high whenever I run, solely from residual cannabis compounds.

And that's not all, according to Barsoom. "Recent studies suggest cannabis can increase oxygenation of tissues, improve vision and concentration, help athletes forget previous traumatic experiences related to the activity, reduce muscle spasms and aid in pain relief," he said. "By controlling inflammation, cannabis will increase the pain threshold so that athletes can push themselves harder during workouts." The downside there is that by dampening your sense of pain, you run the risk of ignoring the first signs of injuries that come with pushing yourself too hard. So I vowed to quit at the first suspicious cramp.

The run was starting off a bit rough. I was sweating hard almost immediately. My creaky left knee was acting up. So I surprised even myself when, about 10 minutes in — and more than 15 minutes since I'd taken the "Go" chocolate — I decided to change my route on a whim, going farther up a road that lead away from town instead of taking my usual turn back toward a local park. The novelty of the new scenery seemed to improve my stride, and soon enough I'd discovered a pretty dirt backroad through some farmland. I was all alone out here, following a long straight line, and my mood instantly improved.

As I found my way back through civilization — I had to dash across a dried-out stream, scramble over some rocks and hurdle a short wooden fence, all obstacles that made this exercise more of a game, as if I were a kid again — I noticed I was getting thirsty.

Cannabis doesn't always give me the dreaded "cotton mouth," which is apparently the result of blocked saliva production, but edibles do seem to cause it more often for me. Yet as soon as I'd recognized the problem, I was able to mentally map out the second half of my run so that it took me past several public water fountains. Again I had the impression that the "Go" made me more adaptable in encountering these little snags.

By the time I hit the 4-mile mark, I was experiencing a full-on second wind. With an added jolt from my running playlist (amazingly, it was Carly Rae Jepsen's "Higher"), my last lingering aches melted away. I was actually running faster, as if coming down the other side of a mountain, or maybe cresting a giant wave.

At 5 miles, I still felt great, and at 5.5 miles, feeling both euphoric and invincible, I wondered if I was experiencing that fabled "runner's high" for the very first time. I wound up running more than 6 miles total; no big deal for a seasoned marathoner, but farther than I'd ever run myself. My running app confirmed the small personal record. And despite the well-known "munchies" effect of marijuana, I decided to skip my secret post-run indulgence — a pepperoni slice and a beer at a downtown pizza bar.

There was no question about it: "Go" kept me going.

But cannabis alone won't help you cross the finish line

As much as I love weed, and as plain as the positive results were with "Go," I still had a hard time believing that an cannabis had improved my workout. Maybe I just have too many memories of DARE class and seeing the message "Winners Don't Use Drugs" flash across '90s arcade-game screens.

Barsoom explained, however, that the THC and CBD in his edibles are but two components of a multifaceted supplement. The "combination of other botanicals" in the chocolate, he claimed, become a "source of 'clean energy' for athletes." These additional ingredients include theanine, an amino acid found in green tea; studies have confirmed that it lowers anxiety and enhances one's mood, possibly by influencing certain neurotransmitters.

Paired with stimulating caffeine, Barsoom said, these two chemicals "actually synergize to bring you a clean, calm and lucid focus." Again, research bears this out: One study found that caffeine and theanine, when taken together in a 1:2 ratio, improve performance on "cognitively demanding tasks." The "Go" edibles pair those chemicals in that same ratio for maximum benefit.

Then, Barsoom added, there's theobromine, a stimulant found in chocolate. It acts as a vasodilator, relaxing your arteries and increasing blood flow throughout the body. Just as cannabinoids can replicate aspects of the body's physical reaction to exercise, so theobromine boosts circulation in a way that mirrors the vasodilation from a regular workout. Barsoom went on to theorize that the combination of theobromine and caffeine — because they interact with the central nervous system in similar fashion — may heighten their effects while tempering the spike in blood pressure associated with caffeine. It's an idea not unlike the notion that CBD mitigates some of THC's less desirable side effects, and all this synergistic chemical-pairing owes something to the burgeoning fad of nootropics, drugs that in the right combination allegedly enhance an array of brain functions, from memory to problem-solving.

All in all, then, 1906's edibles are concocted with many physiological processes in mind — and marijuana extracts may be the finishing touch rather than the feature attraction. But between the banishment of some usual joint discomfort and an undeniable lift in my spirits partway though the run, I couldn't deny that weed played an important, active role. I'm not about to eat a tray of hash cookies before my next jog, but I wouldn't be surprised if a small nibble on some weed chocolate becomes part of my regular exercise routine.

And to anyone thinking about trying it themselves: Happy trails.