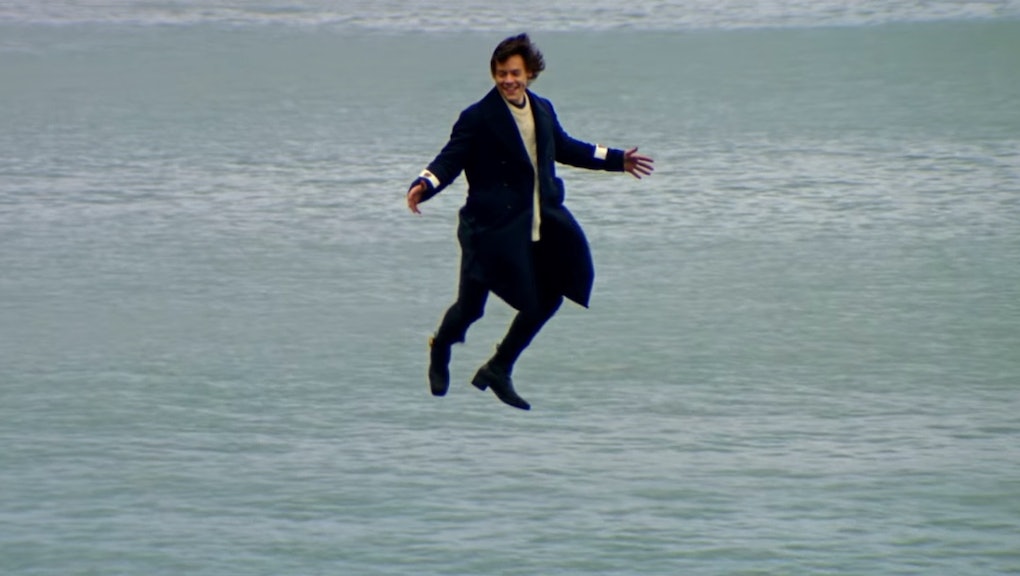 Harry Styles 'Sign of the Times' lyrics: An explainer of the song and music video

Upon first listen, Harry Styles' first solo single "Sign of the Times" could be taken as an ode to a relationship in its final stages. The former One Direction member sings, "We never learn, we been here before/ Why are we always stuck and running from/ The bullets?"

In recent interviews, Styles has said that lines like that one have meanings and intentions that go beyond heartbreak.

In a New York Times article published in May, Styles, 23, was asked if "Sign of the Times" had a political message, specifically related to such issues as "Brexit, Black Lives Matter and Donald Trump."

"I think it would've been strange to not acknowledge what was going on at all," Styles said. "For example, 'Sign of the Times,' for me, it's looking at several different things. That's me commenting on different things."

When asked to expand on that comment, Styles said the following:

"Everything you were talking about — just the state of the world at the moment. It's very much me looking at that. It's a time when it's very easy to feel incredibly sad about a lot of things. It's also nice sometimes to remember that while there's a lot of bad stuff, there's also a lot of amazing people doing amazing things in the world."

In a Rolling Stone interview published in April, Styles also said that "Sign of the Times" channels the perspective of a woman who has given birth, but is told she won't survive the pregnancy.

The song is written from a point of view as if a mother was giving birth to a child and there's a complication. The mother is told, 'The child is fine, but you're not going to make it.' The mother has five minutes to tell the child, 'Go forth and conquer.'"

The visual treatment for the song, released Monday, explores themes of breaking free and transcending a difficult reality.

In the clip, Styles starts off walking in daylight near a large body of water and mountain. The camera then pans to his feet and he floats off the ground for a few seconds before landing. But this is only a test run. Once the song picks up, he floats and then soars and doesn't come back down. As Styles becomes comfortable with his powers, he even runs on the water.

Of course, the image of taking flight and setting off on his own plays into the fact that this is the beginning of a new phase for Styles' musical career.

Styles' new solo material from his self-titled solo album can be streamed here.