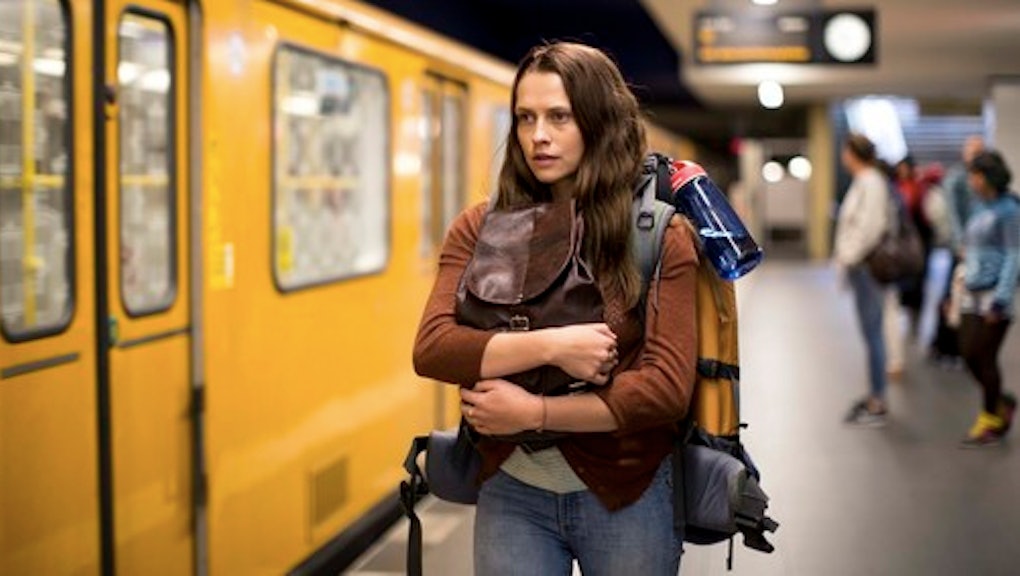 'Berlin Syndrome' is the most terrifying kind of fairy tale: the one that might come true

In the old French folktale "Bluebeard," a young bride married to a wicked man discovers the bodies of his missing wives hanging from hooks in a room he has forbidden her to enter. Bluebeard realizes his wife knows his secret when he sees the key to the room stained with the blood of the other women. Facing death, the wife convinces Bluebeard to allow her to say her final prayers and steals off to her tower to signal her sister for help. Her sister hurries their brothers, who rush Bluebeard's castle and kill him just in time to save the young wife's life.

Bloody and violent as it is, the story of Bluebeard isn't as well known as other fairy tales, which nevertheless are often brutal depictions of women's fate in a world dominated by men. Berlin Syndrome, a thriller set to release on May 26, is about an Australian backpacker (Clare, played by Teresa Palmer) who is locked up and abused by her German lover (Andi, a perfectly creepy Max Riemelt) is based on the novel of the same name by Melanie Joosten and draws from the legendary tale

Along with 2015's Room, which led to an Oscar for Brie Larson for her portrayal of a woman who raises a son in the shed where they are held captive, Berlin Syndrome joins the trend of modern fables about women on the cusp of independence, brutalized by the men around them. There's also Margaret Atwood's The Handmaid's Tale on Hulu portraying women locked away and men engaging in sanctioned rapes against them under threat of death. The comedy Unbreakable Kimmy Schmidt deals with life after years living underground and sexual abuse in a bunker. Nowhere is sexual violence against women explored more than on HBO's Game of Thrones, where rape is routinely used as a tool for controlling women and their freedom is tied to the fortunes of the men around them. These works serve the dual purpose of making a statement about violence against women, while also being a cautionary tale for women that violence is always lurking in the periphery of their freedom.

Berlin Syndrome is Beauty and the Beast in the darkest timeline. We know Clare might end up like all those other helpless princesses and her curiosity will be punished the minute she takes a bite of the red fruit that Andi offers up on their first meeting. The fairy tale references come pretty fast and furiously; a big bad wolf even makes an appearance as they stroll through a garden and Andi tells her it's a good place to "complicate" life — a deliberate malapropism he uses to come off all cute-like to English-speaking tourists.

Predictably, Clare giddily joins Andi at his apartment where he tells her she can be as loud as she wants during sex because no one will hear, pillow talk that sounds ominous even as he says it. She spends a day locked in his apartment thinking he just forgot to give her a key and willingly returns with him to his place after a night out at a disco. It's a sexy good time that will not go unpunished. Quickly she realizes she is permanently locked in Andi's Kreuzberg apartment. She begins to find traces of the other women he has kidnapped, the other "wives": a pen from a Canadian bank, an earring, red nail polish.

It's clear from the allusions to timeworn fairy-tale archetypes that Berlin Syndrome critiques all those ancient stories, but it remains unsettling — and relevant — because the on-screen depiction borrows from real-life events. In 2002 in Utah, Elizabeth Smart was kidnapped from her bedroom and held hostage by Brian David Mitchell for nine months. In Ohio, Amanda Berry, Georgina DeJesus and Michelle Knight were rescued in 2013 after 11 years of captivity in a windowless dungeon at the home of Ariel Castro. In 1991, Jaycee Dugard was kidnapped on her way to school in California at the age of 11 and held in a backyard for 18 years before she could escape with two daughters fathered by her kidnapper. In Austria, Josef Fritzl kept his own daughter, Elisabeth, captive in a dungeon where he sexually abused her daily for 24 years until she was able to get help in 2008. Elisabeth's statement was so horrifying that prosecutors segmented her court testimony in order to give jurors a mental health break.

Every fiction has a kernel of truth. Hundreds of years have passed since Charles Perrault published the story of "Bluebeard," which had passed down orally for hundreds of years before that, yet the underlying menace that threatens young women remains. We can still be snatched up by wicked men from our bedrooms as Smart was, or kidnapped by someone we know who offers a ride as Castro's victims were lured, or drugged at a school bus stop in the way Dugard was taken. There are still rooms to which we don't have the keys. These stories, variations of which we tell regularly on-screen, reinforce the real-life news stories that confirm our worst fears. The effect is a pop culture landscape built in no small part on showcasing violence against women.

Although women are warned about talking to strangers, traveling alone and enjoying casual sex, society also demands that we live freely and take risks in order to be independent. Clare points this out when she tells Andi she's visiting Berlin to have one of those once-in-a-lifetime experiences people always talk about. She embodies the dictum to not be a prude but to also be careful, a walking virgin-whore dichotomy that is not lost on Andi. The tension between taking a risk and playing it safe is made palpable by Clare when she trembles as she first approaches Andi, who has already thrown some red flags — he routinely crosses physical barriers to test her response: a kiss when they first meet, caressing her face later that night as they say goodbye, explaining what the German word for "choke" means by literally choking her at a sidewalk cafe. The alternative to living life is to remain cloistered, a fate that befalls Clare anyway.

Taking the conflict between living life or hiding from it, director Cate Shortland stays away from simple solutions or platitudes. What she makes clear instead is that if we can't change the stories, these ancient archetypes, then maybe we can change what we take from them. Although our modern understanding of fairy tales classifies them as fantasies for children, historically they mostly served to warn women against stepping out of line — as Perrault wrote in his moral to "Bluebeard": "Curiosity, in spite of its appeal, often leads to deep regret. To the displeasure of many a maiden, its enjoyment is short-lived. Once satisfied, it ceases to exist and always costs dearly." Here, it is curiosity, not having a serial killer for a husband, that costs maidens dearly.

This is where Shortland asks us to consider an alternative ending. In "Fitcher's Bird," the German version of "Bluebeard," a sorcerer kidnaps sisters, one-by-one, to make them his bride. Just like his French counterpart, he forbids entry to one room which each sister inevitably enters. There, they find a macabre scene of dismembered body parts from all the previous wives. As punishment, they themselves are dismembered (unbelievably, this is a children's story).

In this case, a man doesn't come to the rescue. Instead, the youngest sister, kidnapped last, enters the room without her husband knowing and brings her sisters back to life. She convinces her evil husband to take a basket of gold to her parents as a dowry for their marriage and smuggles her sisters within it. She disguises herself as a bird, leaves the castle and waits until the sorcerer returns before barring all the doors and lighting the whole thing up. Put your lighters up, indeed.

Curiosity brings her to the forbidden room but, far from condemning her to death, finding the truth brings back her sister's lives. Her intelligence, rather than lead her to perdition, secures her own freedom. Her sisters and their bond, as in "Bluebeard," help engineer her escape. The youngest sister's bold independence and bravery bring back life and justice. It's in courageously finding out the truth, not hiding from it,  that we can save ourselves. Locked away and lost to the world, Clare grapples with which bride she will be — the one to be discovered by a successor, or the one who disguises herself and flies free.

We tell stories of lost women to make sense of a world that hurts women. Sometimes, the fantasies can teach us that despite the dangers we don't have to be afraid of dungeons, because we are the keys.