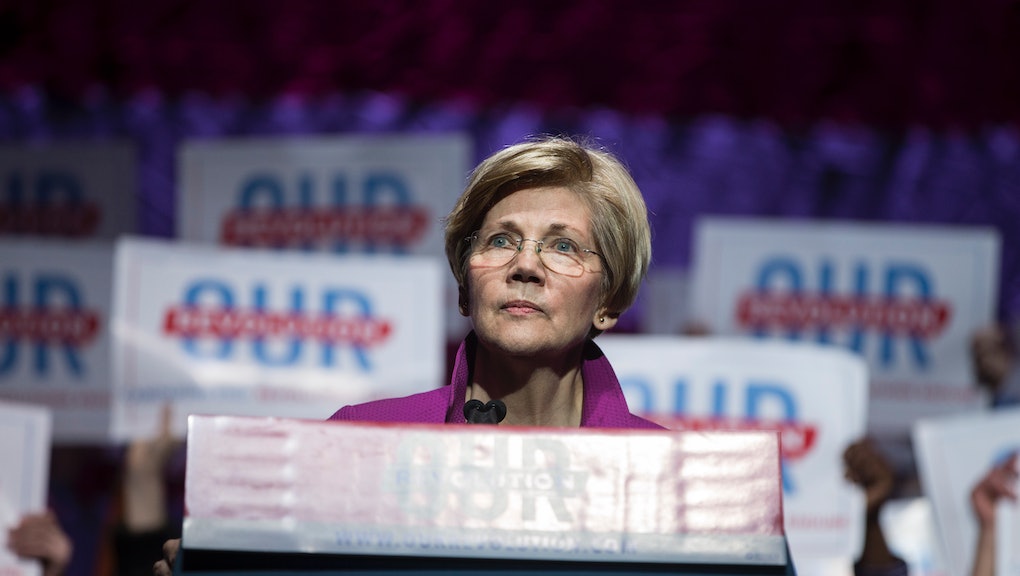 Senator Elizabeth Warren had some fighting words for the graduates at the University of Massachusetts to whom she delivered a commencement speech Friday. They were almost literally: fight Donald Trump and every other elected official not currently working to alleviate the student debt crisis.

"As a practical matter, how much you owe and who has access [to education], is set, in part, by a handful of people who, in a democracy, are supposed to answer directly to you," Warren said in her speech, according to CNN.

The amount students have to pay is "heavily influenced" by state and federal lawmakers, she said. If students don't involved and agitate, the partisan status quo, which currently has 44 billion borrowers sharing $1.4 trillion in debt, will change this country top-to-bottom.

"I am not here to make a pitch just to Democrats or to Republicans ... Libertarians, vegetarians, Big Mac-atarians," she said. "Your elected officials are increasingly working only for a few — the very wealthy few — and if that doesn't change soon, then this country will fundamentally change."

Warren has been incredibly active in fighting for student loan reform. In April, she introduced the "College for All" Bill alongside Bernie Sanders. If passed, it would eliminate tuition and fees at public four-year colleges and universities for students from lower-income families and make community college tuition-free for all. It would also cut interest rates by half for new borrowers and allow graduates to refinance their loans to the updated rates.

Considering the current Republican-controlled Congress and Trump-led White House, the bill is essentially more of an organizing tactic for a new progressive Democratic base than actual feasible piece of legislation.

Warren's University of Massachusetts speech functioned similarly. She said she was trying to "keep this apolitical" but couldn't "help herself," according to Time. The senator presented students a range of issues that require collective action, including free speech and criminal justice reform.

"We need a Justice Department, not an Obstruction-of-Justice Department," she said, in a seeming nod to the ongoing fallout surrounding the firing of FBI Director James Comey, who had been spearheading an investigation into President Donald Trump's Russia connections.

"Don't just pick whatever cause that Emma Watson or Taylor Swift are supporting this week — no matter how much you want to be in their squad," she said. "You've got to figure out what makes your heart flutter and your stomach clench. What makes you wake up ready to go, and what makes you wish you didn't have to move?"