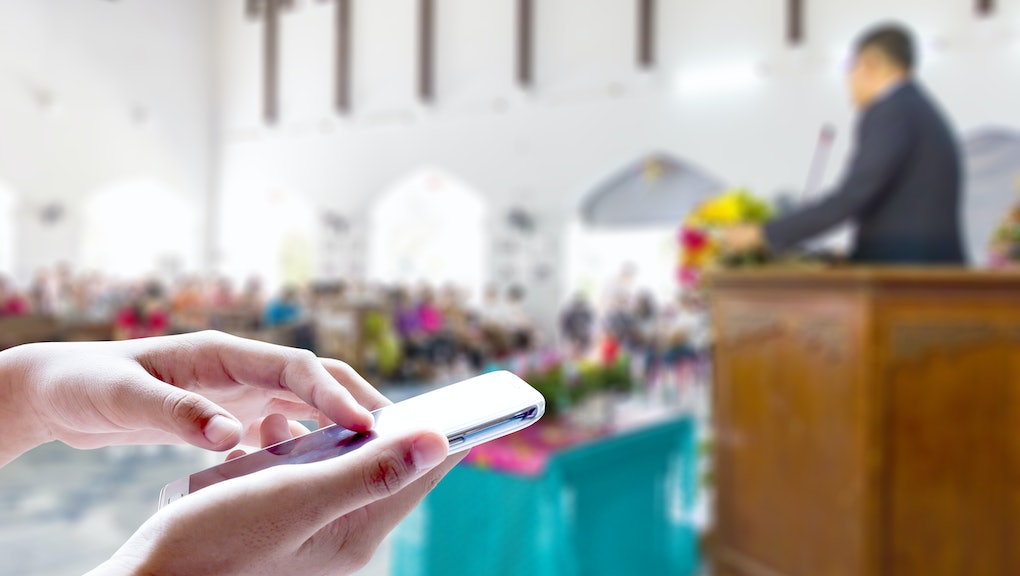 What does a cashless society look like? In Sweden even churches take digital payments.

Imagine a cash-free society, where all financial transactions are conducted via mobile app. What would that be like? One European nation is giving the rest of us a preview of our cashless future — where everything from bus fare to street food is bought with digital payments.

Indeed, even at the collection plate in Sweden, donors pay without cash: The country has become so cashless that church donations via phone are common, and a 13th-century cathedral in Uppsala actually takes credit card payments, Bloomberg reports.

"One thing that's quite funny is that when you collect these days, there are some who will raise their mobile phone in the air to show that they are giving," Swedish Church spokesman Mats Lagergren told Bloomberg.

For some time now, Sweden has been moving away from cash, both to save on costs and as a matter of convenience. When the Swedish central bank surveyed residents about how they paid for a most recent purchase, only 16% of respondents said cash in 2016 — down from 33% in 2012.

The amount of currency in circulation has also fallen steadily since the mid-2000s, and is currently the lowest it's been since 1990, according to Bloomberg.

Sweden is on the cutting edge

There are a few reasons why the Swedes have been particularly quick to do away with cash. The country has been an early adopter of several technologies; for example, both personal computers and mobile phones took off early there, Bloomberg reported. The same is the case with mobile payments: With a population of just under 10 million, some 5.5 million Swedes now use a bank-owned app called "Swish" to send and receive payments.

Most flea market vendors now prefer to be paid via Swish as opposed to cash, Bloomberg reported, and even the homeless have begun moving away from cash payments. Most of the banks in Sweden no longer handle cash transactions — and retailers are legally allowed to refuse physical money.

Despite privacy concerns and some pensioners who still have trouble making payments with the app, Swedish officials project that cash will "more or less disappear" in the future, Cecilia Skingsley, deputy governor of Sweden's central bank Sveriges Riksbank, told Bloomberg.

Here's why the U.S. lags behind

Sweden stands as a striking counterpoint to the United States, where mobile payment adoption has been slow. Only 14% of the ostensibly tech-savvy millennials say they use their bank's mobile app, according to MarketWatch.

Less than half of millennials said they use Venmo to send and receive payments, though the app has grown more popular. While concerns about security may play a role, 37% of consumers surveyed by Accenture in 2016 said cash and cards already met their needs. "The reality, too, is that merchants have been slow to invest in modern card readers," noted the Accenture report. "Even if people want to pay by smartphone, they often cannot."

Though American consumers may be slow to embrace mobile payments, American churches have not. Like in Sweden, numerous apps such as Tithe.ly and Pushpay make it easy to donate money to U.S. congregations. Tithe.ly serves about 1,000 congregations, while roughly 3,000 parishes use Pushpay.