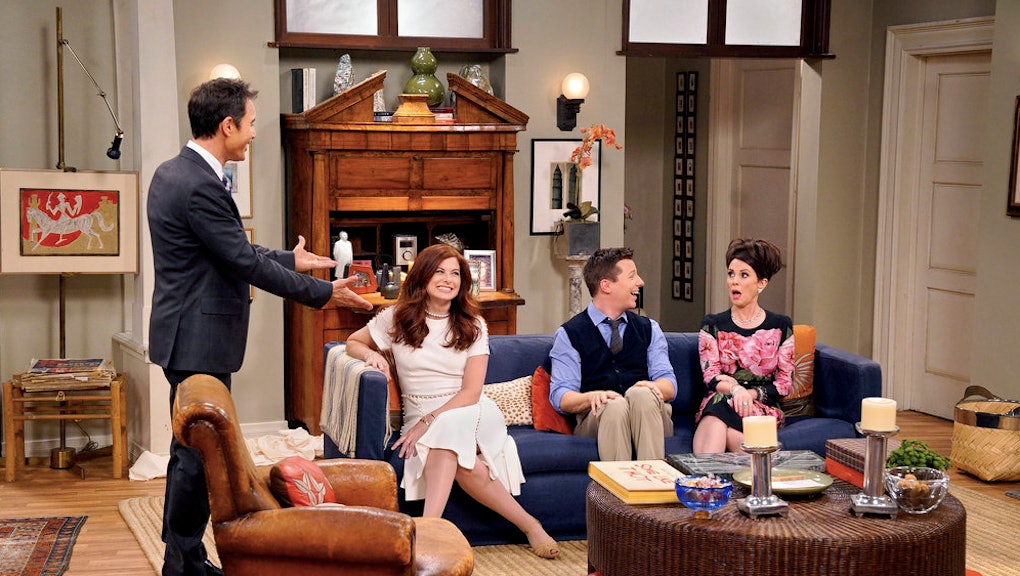 'Will & Grace' is returning to NBC, but LGBTQ TV has moved on

In the 1998 pilot episode of Will & Grace, titular protagonist Will Truman opens his home to his friend, Jack McFarland, who needs to move in with him for a few days. They're not dating — they both scoff at the very idea — but they banter like husband-and-husband would. Will is the more typically masculine of the pair, while Jack is a bright, brilliant flame of a man. They stay firmly ensconced in those roles, so much so that when Jack tries to move in but Will says he can't yet, Jack bursts into a whirlwind of snippy anger.

"You don't understand," Will argues, before glancing down quizzically at Jack's many pieces of luggage. Then, the punchline: "What's in the hat box, a tiara?"

Go back nearly two decades in television history and you'll find, broadly speaking, two major approaches to making LGBTQ TV. There were shows like Will & Grace, chaste sitcoms derided for being too stereotypical in their presentation of gay men as either feminine or self-loathing. And then there were series like Queer as Folk, sexual, sensual cable shows praised for portraying an honest slice of gay life. But Queer as Folk also came under fire for perpetuating the idea that gay men are sex-obsessed. Both starred mostly white casts, representing a specific kind of urban gay life in the late '90s and early 2000s. Gay characters on other shows were rare.

Fast-forward to now, and LGBTQ representation on TV has improved by leaps and bounds. It's common for new shows to count gay, bisexual or transgender characters among their casts. Queer-inclusive series like Netflix's Orange Is the New Black and Sense8 are pushing the boundaries of both representation and depiction of queer sex on TV. Instead of more sexually frank shows like Queer as Folk and The L Word being the exception, series with queer woman protagonists like The Good Fight and realistic depictions of gay sex like How to Get Away With Murder are increasingly the norm.

So it feels odd to welcome back Will & Grace, which is being revived by NBC for at least 12 episodes this fall, making it the latest and perhaps most retrograde of many upcoming reboots. While we may question why a show like Roseanne — which definitively concluded its story in its finale — needs to come back, Will & Grace's depiction of gay life feels especially and extraordinarily out of place in 2017.

But in many ways, Will & Grace won't be alone in its treatment of LGBTQ characters, assuming it picks up where it left off in 2006. Shows like Modern Family and Grace & Frankie have continued the trend of hackneyed gay-sex jokes and stereotypical characters in the years since. At a time when much of LGBTQ television is daringly ambitious, the dichotomy that existed between Will & Grace and Queer as Folk at the turn of the century still exists — and this revival is not an encouraging sign for the future of queer TV.

As rumors of Will & Grace's revival first swirled, specifically when the cast reunited for a PSA sketch about voting in September, reactions to a potential reunion were incredibly mixed. Cases against a reboot were quickly argued, while others went so far as to dismiss the show's cultural impact. Much was made of how the series traded in stereotypes that wouldn't be appropriate today. Panic about a return made some people wonder why Will & Grace was beloved in the first place.

Yet when former Vice President Joe Biden came out in support of same-sex marriage in 2012, he cited Will & Grace as part of what changed many Americans' perspective on LGBTQ issues and people. He wasn't wrong, even if Will & Grace's gay characters seem more like caricatures in retrospect. That's to be expected, though: It's a multi-camera sitcom, broad by its very nature. (The characters on The Big Bang Theory are hardly three-dimensional, either.) Still, long-running shows can and often do change cultural perceptions.

Over the course of Will & Grace's eight years on the air, viewers let Will and Jack into their homes, falling in love with them not just as characters, but as stand-ins for real gay people. Suddenly, Wills and Jacks in people's lives were not unknown figures to be feared or ignored, but neighbors and friends to be embraced. For shifting the way Americans treat gay people, the show remains important.

Perhaps it's time we reassess whether it makes sense to classify Will & Grace as a "gay" TV show, which implies it's aimed at a primarily queer audience. Like Modern Family, or any of the shows with prominent gay characters and not much queerness in the storytelling, Will & Grace is really a show for heterosexual audiences that happens to feature LGBTQ characters. It can be enjoyed by gay viewers, of course, but they're not the target. The reason Will & Grace was able to persuade hearts and minds is precisely because it courted straight audiences.

Meanwhile, something like the aforementioned American Gods sex scene or a show filled with queer and trans women, like Orange Is the New Black, feels more explicitly created for LGBTQ audiences. The storytelling itself is informed and influenced by the sexuality of its characters. When Transparent includes a lesbian sex scene between a cisgender and trans woman, you can feel queer creator Jill Soloway's influence behind the camera: how she focuses on her characters' expressions and emotions instead of the actual sexual act being performed. And she brings the same tenderness to her latest Amazon show, I Love Dick. There's an empathy and a love in her direction that makes it special and unique for queer audiences.

Of course, simply having a gay writer or director doesn't automatically make the storytelling more progressive or authentic. Will & Grace creator Max Mutchnick is married to a man, after all. It's a mixture of who's behind the art and their intentions for that art. But as art for LGBTQ audiences becomes more liberal and sexualized, sanitizing these kinds of storylines for straight audiences in more traditional shows like Modern Family — and, presumably, the Will & Grace reboot — feels increasingly backward-looking.

Thinking generously, it's possible Will & Grace could surprise us and fit into the 2017 TV landscape better than expected. But judging by the show's iconic first run, it's tough for me, as a gay man, to get genuinely excited for Will & Grace's return to TV — unless I view it less as part of some universal LGBTQ genre and more as part of a tradition of formulaic sitcoms. Really, it has more in common with a Chuck Lorre show like Mom or The Big Bang Theory than it does with today's groundbreaking stories. It's not Will & Grace's fault that it doesn't stand up to shows like Hannibal, which redefined Hannibal Lecter and Will Graham's relationship as radically queer, or even Unbreakable Kimmy Schmidt, which presents a textured, gay, black character in Titus Andromedon.

The issue with this impending reboot is not in what Will & Grace was, but in what it will be now. Its new episodes will air on NBC, which suggests a certain conservatism that will likely fall in line with the original series. Many fans of the show are probably hoping for that continuity, too; it'd be odd for Will & Grace to return as a vastly different series than it was. But for anyone besides the most passionate fans, what worked in the late '90s and early 2000s — a time when mainstream audiences sorely needed a show like Will & Grace, whether they realized it or not — will not work now.

For this project to succeed creatively, it will need to embrace the changes in LGBTQ TV over the past several years and freshen its approach to storytelling. But Will & Grace almost certainly isn't being revived to be creatively bold; it's returning because it's a known property at a time when everything is up for being resuscitated and thrown back on the air.

Again, maybe Will & Grace circa 2017 will upend expectations. But if what we've seen from the show in the past is any indication, we can expect dozens of jokes about Jack turning straight men gay before we get anything even close to modern.