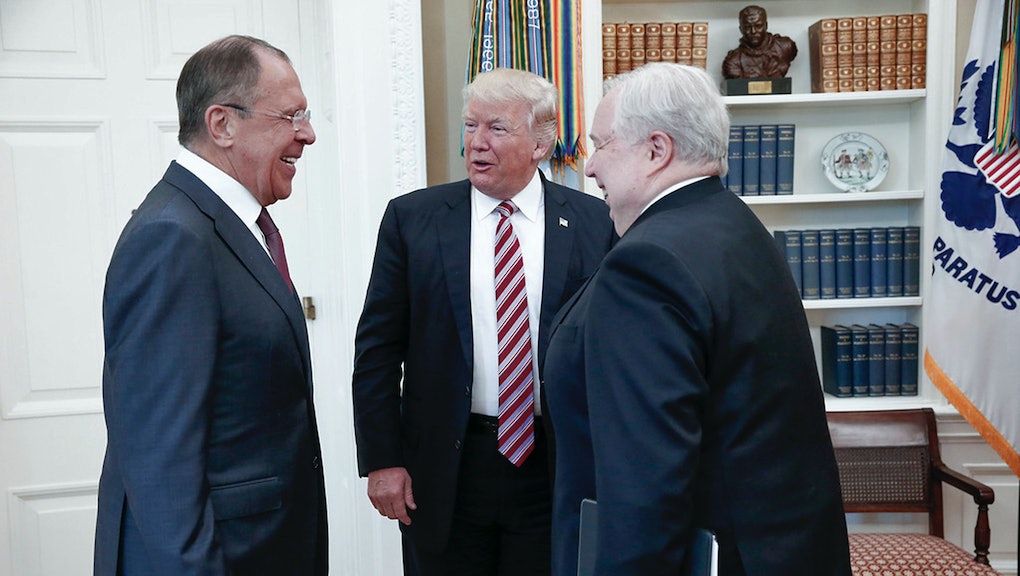 Trump says he has an "absolute right" to disclose classified information. Does he?

President Donald Trump apparently revealed classified information to Russian officials during a White House meeting last Wednesday. Administration officials have denied this report, but Trump himself seemed to confirm it in a pair of Tuesday morning tweets.

The news that Trump may have disclosed "highly classified information" to Russian Foreign Minister Sergei Lavrov and Ambassador Sergey Kisylak — first reported by the Washington Post on Monday evening — comes as the White House struggles to contain the fallout from Trump's firing of former FBI Director James Comey May 9.

As criticism from both Democrats and some Republicans mounted against Trump in the wake of the Post's bombshell report, Trump defended his actions on Twitter, writing that he has the "absolute right to do" what he appeared to confirm he did.

As many have pointed out, he's sort of right. Trump does not seem to have done anything illegal in disclosing the "code-word" Islamic State information to the Russians. The United States Constitution gives the president the power to declassify information, and Trump is not the first president to exercise that power — John F. Kennedy revealed classified intelligence, for example, during the Cuban Missile Crisis in 1962.

But presidents typically exercise more caution when disclosing classified intelligence. Trump, according to the Post, allegedly divulged the information to the Russians while bragging about the quality of his intelligence. "I get great intel," the president reportedly said. "I have people brief me on great intel every day."

That apparent recklessness with the classified information is what could get Trump in trouble. While the reveal does not seem to have any criminal consequences — as it would if any lower U.S. officials had similarly divulged classified information — it carries obvious political repercussions, and, according to Lawfare, could even constitute a violation of Trump's oath of office.

In assuming the presidency, Trump vowed to "faithfully execute the office of president of the United States" and to "preserve, protect and defend the Constitution of the United States" to the best of his ability. According to Lawfare, "carelessly giving away highly sensitive material to an adversary foreign power" could very well be considered a violation of that oath.

As the legal news website notes, a president does not have to violate any criminal laws to violate their oath of office — and all three times Congress has passed or "considered seriously" articles of impeachment against a president, it has claimed violations of the oath.

So while Trump is correct that he's within his legal rights to declassify information, the manner in which he does it could carry huge consequences for him — and even open him up to impeachment.

"There's thus no reason why Congress couldn't consider a grotesque violation of the president's oath as a standalone basis for impeachment — a high crime and misdemeanor in and of itself," according to Lawfare. "This is particularly plausible in a case like this, where the oath violation involves giving sensitive information to an adversary foreign power."

"That's getting relatively close to the 'treason' language in the impeachment clauses," Lawfare continued. "It's pretty easy to imagine a hybrid impeachment article alleging a violation of the oath in service of a hostile foreign power."