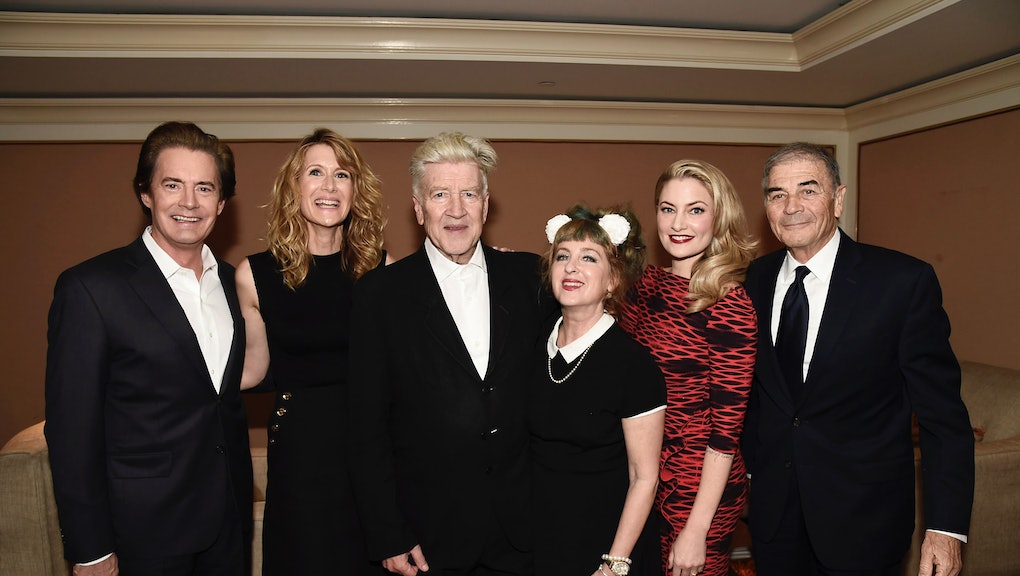 Start brewing that damn fine cup of coffee — the Twin Peaks revival is set to air Sunday night. Despite bumps along the show development and production road, and the 26-year hiatus between the last season and this one, the series is officially back. However, it may not be exactly what fans remember.

One thing that creator David Lynch has divulged — and he hasn't divulged much — is that the follow-up film to the original series, Twin Peaks: Fire Walk With Me, is key to understanding this new season. While that may be somewhat disconcerting to fans of the original, because the film was such a departure, they can still take solace in the many familiar faces they'll see in the reboot.

These are the 31 original actors who are slated to return in Showtime's Twin Peaks.

What would Twin Peaks be without everyone's favorite tape-recording Agent Cooper? Obviously, David Lynch agrees since Maclachlan signed on to the reboot as early as January 2015. It will be very interesting to see what Cooper's been up to since the end of last season. Fans will remember that he had just rescued Annie Blackburn from the Black Lodge. However, when he went to the bathroom after waking up in his room, he appeared to be possessed by BOB — the embodiment of evil who's responsible for Laura Palmer's death.

Shelly, the perpetual waitress at the Double-R Diner and wife of the Leo Johnson, gets perhaps the closest thing to a happy ending of all the characters in Twin Peaks. Her abusive husband is gone, and her longtime boyfriend Bobby Briggs just asked her to marry him. Did their adolescent love stand the test of time? Based on their history together, it's a toss-up

Regardless of whether or not he's with Shelly at this point, Bobby — track star and former boyfriend of deceased Laura Palmer — will be present in the revival. Despite his track record of getting into all kinds of trouble, Bobby had cleaned up his act somewhat in season two and was last seen proposing to his girlfriend Shelly. Unfortunately, she had to remind him she's still married to Leo, her currently absent husband.

Lucy, the befuddled receptionist at the Sheriff's office who's in an on-again-off-again relationship with Deputy Andy, also had a pretty good ending in season two. She told Andy she wanted him to be the father of her unborn baby, and the two said their first "I love you" to each other. Odds are her fully grown son will be introduced into the cast of characters.

The Mod Squad's Peggy Lipton plays Norma, owner of the Double-R Dinner and secret lover of Big Ed Hurley. Last time fans saw her, she had finally dropped her criminal husband Hank and was on the verge of getting engaged to Hurley, until his wife Nadine uncovered and spoiled everything.

Drama will likely ensue between lovers Norma and Big Ed in the revival, unless somehow, over the 26 years since the show ended, Ed managed to stand up for what he really wants and leave his crazy wife Nadine.

The last time Nadine was on the Twin Peaks scene, she had just competed in the Miss Twin Peaks contest. Then, in the mayhem that ensued toward the end, she was conked on the head with a sandbag. When she awoke from being knocked out, she'd lost her super strength and teenager personality, thus leaving Ed feeling obliged to stay with her. Has that obligation stuck 26 years later?

The Hawaii-obsessed resident therapist who had Laura Palmer as a patient before she was murdered, was last seen bringing an inauspicious message via Sarah Palmer — Laura's mother — to Major Garland Briggs. Chances are he'll still be enacting his eccentric, and oddly personal psychiatric methods, on the people of Twin Peaks.

Agent Rosenfield —  the bad cop to Agent Cooper's good cop — was last seen going to arrest Josie Packard, owner of the local mill. However, that situation rectified itself without an arrest being necessary, much to the annoyance of Rosenfield. No doubt he'll be stirring up trouble in the wake of whatever investigation Cooper embarks upon in the upcoming season.

Anyone who's not excited for transgender DEA Agent Denise Bryson (previously Dennis) to make a return is not a true Twin Peaks fan. Her role on the show may have been brief, but man, was it unforgettable. She was last seen in the middle of the second season rescuing Cooper from Jean Renault. Lord only knows how she's going to pop up this time around.

Here's a quote for diehard Twin Peaks fans — "Uncle Jerry's back!" Jerry was the little devil on the shoulder of his brother, Ben, the owner of the Great Northern Hotel. While he wasn't prominently featured in the second season, he was seen briefly hanging with Ben in prison when Ben was falsely arrested for Laura's murder. No doubt he'll be doing some of the same 26 years into the future.

Although actress Catherine E. Coulson died back in September 2015, her name does appear on the cast list of the revival. It's unclear how Lynch and co-creator Mark Frost made that work — perhaps they had unused footage from the original series? Regardless of the how, it's great news as the Log Lady was a big favorite among fans. She was last seen at the sheriff's station giving Agent Cooper a jar of oil from her husband, claiming it was "an opening to a gateway."

Duh. How could Lynch resist revisiting the almost deaf Regional Bureau Chief of the FBI? He was last seen laying a big smooch on Shelly in the Double-R dinner with a hugely pissed off Bobby in the background. Maybe he'll do it again this time around?

Mr. Horne, father of the mercurial Audrey, and owner of the Great Northern Hotel will indeed return, although in what state is unclear. At the end of his stint last season, he was trying to do right by his daughter and come clean about his affair with Donna's mother, which of course, led to him getting punched in the face.

Father and daughter together again! Audrey, who was always getting herself into trouble and falling in love with Agent Cooper and wealthy activist John Justice Wheeler, was last seen handcuffed inside a bank that exploded. Obviously, she got out of that one somehow. Or perhaps she didn't and her presence will be posthumous?

Laura's mother Sarah seemed to never not be mourning someone close to her. Now that her daughter, husband and niece are dead, it's unclear what part she'll play in the revival. She was last seen bringing a message to Major Briggs with Dr. Jacoby.

Parting is such sweet sorrow, especially for James who left four romances in the dust at the end of his stint on the original series. He was last seen riding off into the great blue yonder to find his next adventure, a.k.a. another woman whose life he can destroy.

Father, lover, murderer of his daughter Laura Palmer and niece Maddy, Leland died in the cell where he was being held after confessing to his very bad behavior. It's likely his role in the revival will be in flashbacks, unless he's now in the Black Lodge with the others ...

Who killed Laura Palmer? Maybe no one, because she's slated to return to Twin Peaks, as promised 26 years ago. Laura was last seen trapped in the alternate universe of the Black Lodge.

Mike was Bobby's best friend and a high school wrestling star. He was also the ex-boyfriend of Donna.

22. Warren Frost as Doctor Will Hayward

Doc Hayward is the resident doctor of Twin Peaks and also Donna's father.

Appearing in just one episode where she played the piano with aplomb, Gersten is Hayward's youngest daughter.

Resident doofus, Deputy Andy's in love with Lucy, and he was asked by her to be the father of her baby.

'"Hawk" Hill is another deputy who's also an expert tracker.

Ronette went to Twin Peaks High and was with Laura the night she died.

Jacques was a drug runner who once had sex with Laura.

Just like how BOB inhabited Leland, MIKE is the evil spirit inside of Phillip Gerard, the "one-armed man."

30. Carel Struycken as The Giant

Cruise plays the unnamed singer from the Roadhouse.