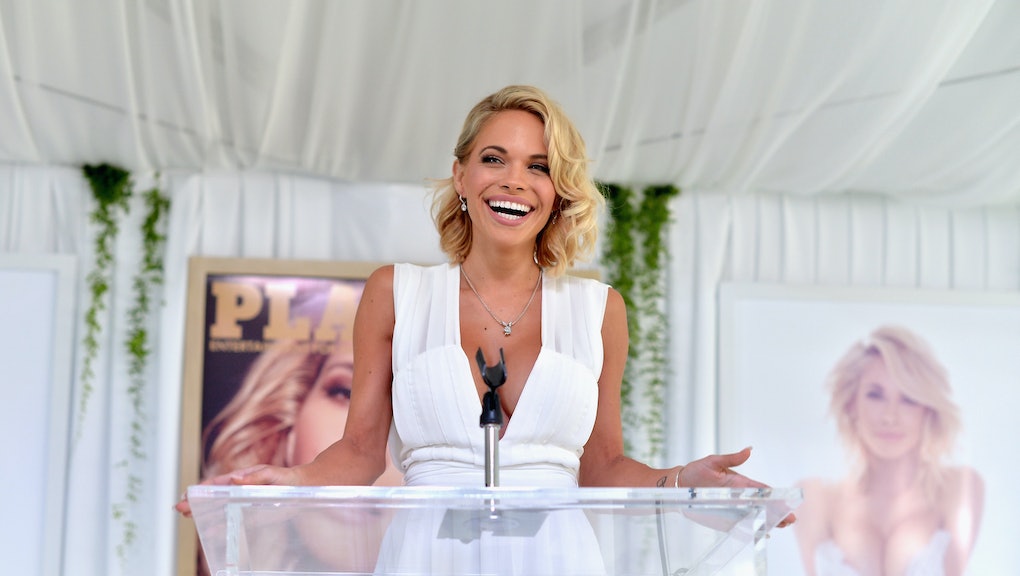 Playmate Dani Mathers is heading to court after very publicly body-shaming a random, naked stranger. According to the New York Daily News, a tentative trial date has been set for May 26.

In July, Mathers took a photo of a 70-year-old woman showering at an L.A. Fitness, a privacy violation in and of itself. She then posted the image to Snapchat with the caption, "If I can't unsee this then you can't either," alongside a selfie in which she posed with her hand over her mouth in feigned shock.

Amid immediate backlash, L.A. Fitness banned Mathers from all of its locations. She was fired from her job at Los Angeles' KLOS 95.5 radio station. Meanwhile, Mathers apologized on social media, explaining that she hadn't meant to post the Snap publicly, that she was "absolutely wrong."

"I have chosen to do what I do for a living because I love the female body and I know that body shaming is wrong and that's not what I'm about, that's not the type of person I am," Mathers said in a video posted to Snapchat, before deleting her account.

Hoping to "make an example" of Mathers, authorities tracked down the woman in the photo and said they intended to charge Mathers with dissemination of private images, which carries a six-month prison sentence. In November, Los Angeles City Attorney Mike Feuer announced that Mathers would face criminal charges for posting the photo, which qualifies as a misdemeanor invasion of privacy, according to the Daily News. California law dictates that it's illegal to photograph or film an "identifiable person" in a changing room, a tanning booth or in their home without consent.

On Monday, Mathers' attorney, Dana Cole, reportedly argued that the woman in the photo wasn't easily identifiable, and thus the law didn't apply. "This was a far-away shot, and the victim, her features cannot be identified," Cole told the court.

But, of course, the LAPD was ultimately able to identify the victim, and as Feuer explained when announcing the charges, Mathers' behavior comes with consequences.

"Body-shaming is humiliating, with often painful, long-term consequences," he said. "It mocks and stigmatizes its victims, tearing down self-respect and perpetuating the harmful idea that our unique physical appearances should be compared to air-brushed notions of 'perfect.'"

"While body-shaming, in itself, is not a crime, there are circumstances in which invading one's privacy to accomplish it can be," Feuer added. "And we shouldn't tolerate that."