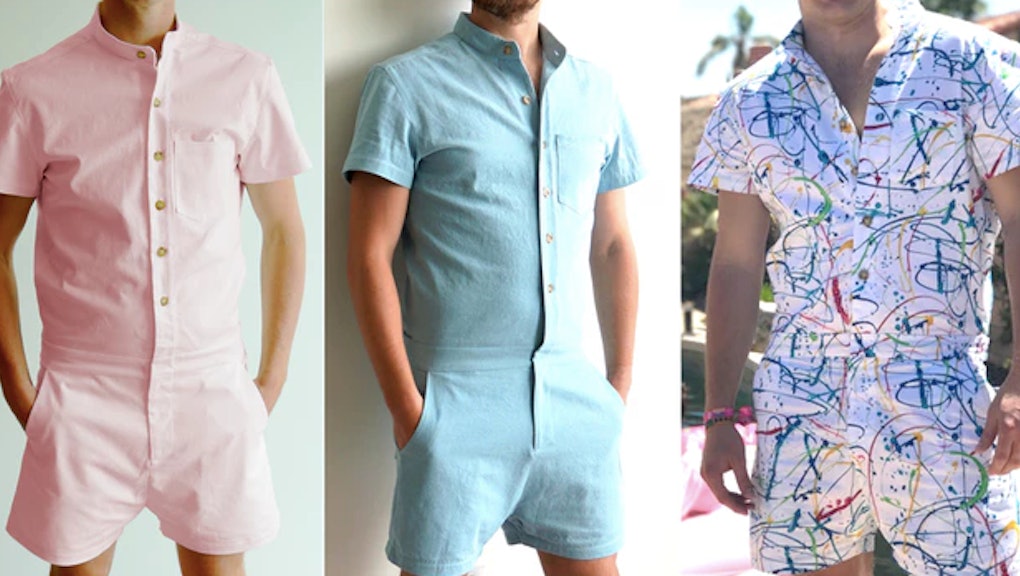 Each morning we open Twitter with the grim certainty of those condemned to endless suffering. No doubt President Trump did or said something bad, we've somehow inched closer to planetary annihilation and some dozen dimwitted takes about these new crises have appeared in once-hallowed periodicals.

This morning was different. Oh, we still got all the usual garbage, but May 16, 2017, also gave us a bit of meme magic we were too depressed to know we desired. Bros had seized upon a potential summer style craze, and it was the "RompHim," a romper for men.

To the credit of ACED Design, the Chicago startup behind this unlikely garment, the press for the RompHim has come thick and fast, with bloggers expressing everything from curious respect to scoffing sarcasm and abject despair. Early reviews may be in dispute, but from where ACED is sitting, things look good. The Kickstarter crowdfunding campaign to launch the men's romper revolution has already pulled in $70,000 — seven times its original goal.

And the internet is exploding. The memes and jokes that popped up in response have, perhaps inadvertently, caused men to confront gendered double standards and their own fragile masculinity. They're still evolving, but here's a brief history.

The first wave of romper memes

It remains to be seen if this burst of virality will translate into a bona fide trend, though Twitter's amused reaction may provide a clue. As images of frat-bro types day-drinking before ballgames and attending Coachella in these pastel onesies circulated the web, people imagined the future they promised.

Then, rather quickly, romper memes began to evolve

Even as a few critics continued to roast the male romper as simply ridiculous, many more observers began to comment on how such an outfit — in the past few years perhaps most associated with American Apparel models and Lena Dunham's character on Girls — could flip sex and gender norms upside-down.

In the age of the RompHim, this line of thinking goes, men will borrow or steal clothes from their (girl)friends, get catcalled by random women and generally co-opt a traditionally female condition: objectified, patronized and too damn cute.

Will the RompHim cause more men to embrace unisex fashion?

For now, these are just jokes, yet Twitter riffs have a way of reflecting emergent reality. It's easy to detect a genuine anticipation for this fad, should it ever materialize. And while there's no way the RompHim will bring about gender equality in and of itself, that excitement about demolishing one small barrier between men and women by embracing unisex fashion is not to be dismissed. In its good-natured goofiness, the RompHim is already a hit.

There's a genuine excitement about demolishing one small barrier between men and women.

A Twitter search reveals, though, that plenty of dudes are right this moment decrying the men's romper as effeminate, "gay" or otherwise not up to their code of fragile masculinity. They're free to complain all they want — nobody's going to make them wear one, and nobody is listening. Style changes; summer looks come and go. If you can't handle that, then maybe you should stay inside this season.