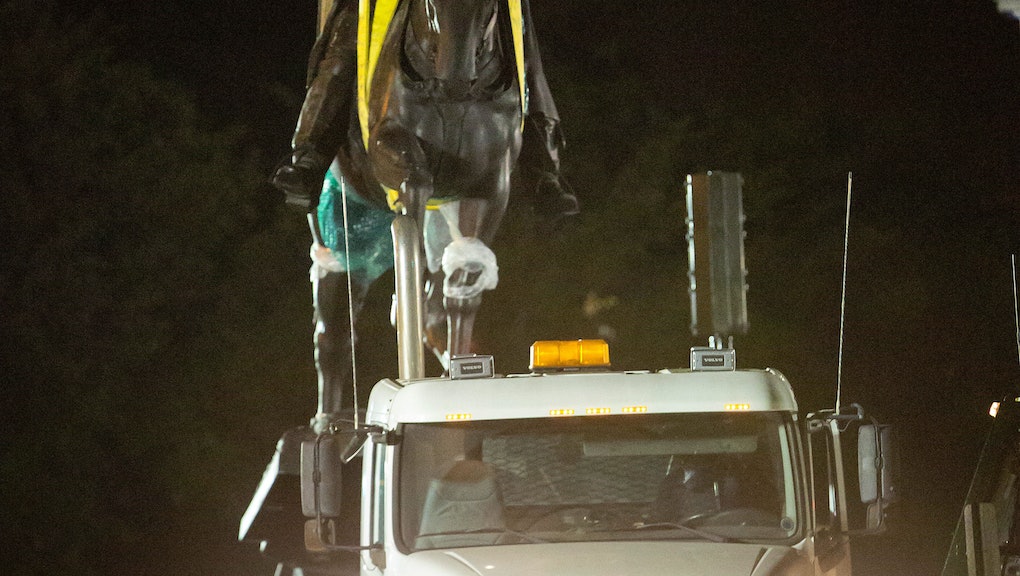 Early Wednesday, a crowd of onlookers cheered as New Orleans removed a monument to General Pierre Gustave Toutant-Beauregard, a military hero of the slave-owning Confederate States of America.

The monument is the third of four monuments to the Confederacy scheduled to be removed from the city.

“Today we take another step in defining our city not by our past but by our bright future," Mitch Landrieu, mayor of New Orleans, said in a press release, "While we must honor our history, we will not allow the Confederacy to be put on a pedestal in the heart of New Orleans."

According to the Associated Press, Landrieu spearheaded the efforts to remove the statue in the wake of Dylann Roof's mass murder of nine parishioners at a black South Carolina church in 2015. Though the New Orleans City Council voted 6 to 1 to keep the monuments, supporters of the Confederate statues, citing the need to preserve Southern history, stalled the efforts to excise the monuments from the city through both legal and unsavory means.

On Monday, the Louisiana House voted 65-31 to pass a bill that would ban any further removals of monuments on public property without putting it to a local public vote first.

The New York Times reported that every crane company near New Orleans received some manner of death threat if they went through with the removal of the monuments. According to the AP, construction workers who removed the previous two Confederate monuments, to Robert E. Lee and Jefferson Davis, wore bulletproof vests to protect themselves from guns and masks to protect their identity.