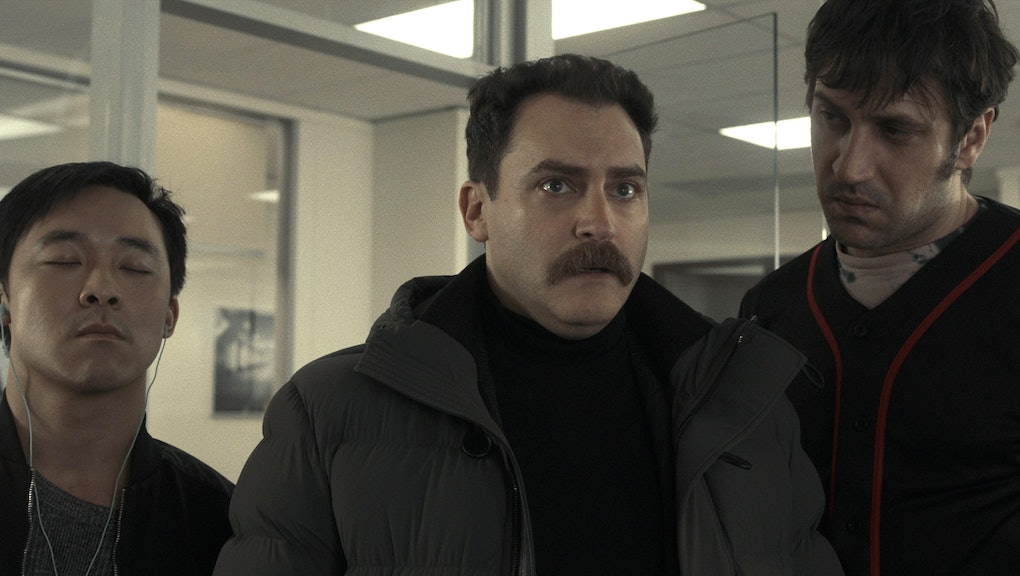 'Fargo' season 3, episode 5 is one gruesome train wreck — but you can't look away

There comes a point at the end of every season of Fargo where the shit hits the fan. Season one's twitchy Lester Nygaard tempting fate with Lorne Malvo, getting even more people, including his new wife, killed in the crossfire. Season two's Red Wedding-esque shootout at the Sioux Falls Motor Motel, wiping out the Gerhardt family syndicate (plus a UFO cameo, for reasons!). I'm not sure if it's a good thing that we're already reaching that stage in the fifth episode of Fargo's third season, "The House of Special Purpose," but indeed, shit is hitting the fan. Or, more accurately, piss is hitting the mug?

Oh, yah, I'll have to explain that one. With last episode's introduction of Officer Winnie Lopez, who interviews Sy at the Stussy offices, shady business mogul V.M. Varga wants assurances that Sy isn't going to talk to the police about their new enterprise. That involves some unorthodox intimidation tactics. First, Varga insults Sy's wife for being overweight — flat-out saying if he came to her in the middle of the night with a plate of cold cuts, she'd leave Sy. Then, he takes Sy's coffee mug (aw, it says "World's Best Dad!"), whips out his dick and takes a quick piss in it. Sy, naturally, is expected to down the cup.

The message is clear: Don't talk to the police. Also, move out of your office — it's Varga's now — and sign some documents that make this creepy dude an official partner of the Stussy parking lot business. Any fleeting optimism Sy has that he and Emmit can get out of this partnership is fading, but he has a last-ditch plan to get them out of trouble: Sell the company to a third party. Thankfully, there's a suitor in the Widow Goldfarb (Battlestar Galactica's Mary McDonnell), who is looking to buy the company instead of actively competing in the cutthroat Minnesotan parking lot business. Her late husband, rather fittingly, grew a lucrative mortuary business. This is all well and good, Sy just needs to get Emmit onboard and then maybe they can escape Varga's clutches.

In theory, yes. But wouldn't ya know it, Emmit is, quite understandably, more concerned with his bitter sibling feud with Ray, who perhaps crossed a line this episode. He and Nikki made a sex tape — Ray putting on his Emmit wig once more — and sent it to Emmit's house. It was a pretty simple ransom: Give us $100,000, or we'll send this tape to your wife, Stella. It's a darn shame they weren't more careful with sending the tape and the ransom note, since Stella is the one who picks it up at the house and watches the video in total shock. Again, the mistaken identity theme of season three rears its ugly head.

Eh, it's pretty much the same guy, peeling off just a bit of his Minnesota niceness and tossing out a few expletives. He asks to meet Nikki to discuss the terms of her ransom, which doesn't count much for blackmail now that Stella's already seen the tape. But Nikki improvises pretty quickly. Now she and Ray want $200,000 — plus that precious Sisyphus stamp — and in return, they'll tell Stella the sex tape isn't real.

What Sy doesn't know is that Varga's men, Yuri Gurka and Meemo, are following him everywhere, including his meeting with Nikki. After Yuri describes the morose difference between snow in Siberia and Minnesota (in short, Siberia has snow to cover up blood), Meemo grabs Nikki, and Yuri offers a chilling threat to Sy: "This is what comes after the cup." They proceed to beat Nikki mercilessly. The camera stays on Sy throughout. It's Michael Stuhlbarg's best work on the show to date, encompassing Sy's combined terror and disgust, and just a bit of pity, as he assumes Nikki just met her gruesome demise. Then self-preservation kicks in, and he leaves the scene.

I'll be honest: I expected this to be the last we see of Nikki — to say nothing of the disgusting sound of repeated, squishy blows to Nikki's body offscreen. But she does survive, crawling to her car and making it to Ray's apartment, lying in his bathtub, immobile. She's probably dying from those wounds, yes, but I'd imagine this isn't the end of Nikki's story since she made it out of the parking lot. We'll know for sure by next episode.

And now, the piss has officially hit the mug (I'm trademarking this phrase) on Fargo season three. Ray will want retaliation for Nikki's attack. Emmit still wants revenge on Ray for the sex tape. Sy is terrified, and desperate, to get away from Varga. Plus, don't forget about Gloria, who's so close to solving her step-father's murder — if only her new chief wasn't in the way.

It's an impending train wreck I can't look away from — which, with Fargo, is kind of the point.