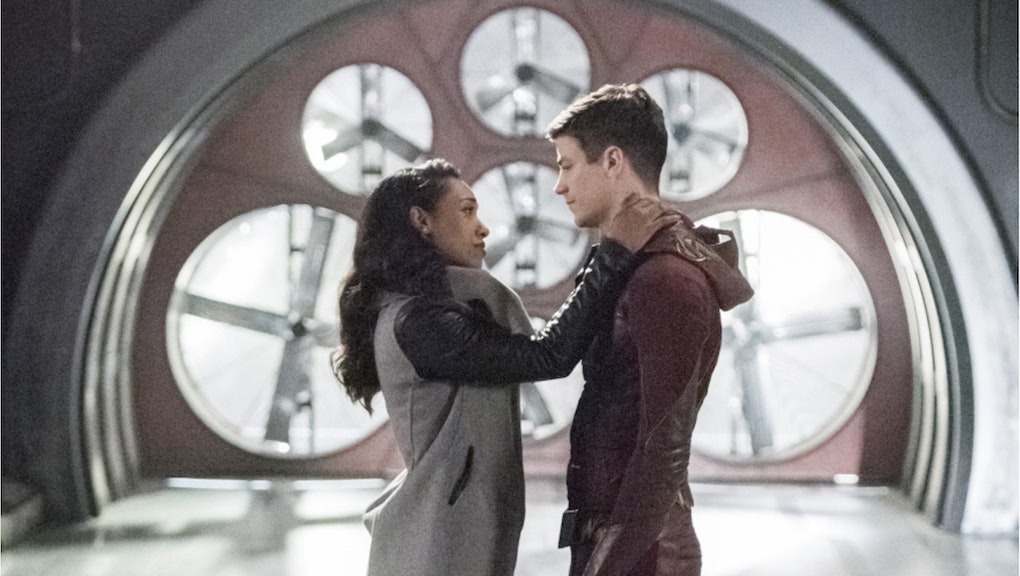 [Editor's Note: Major spoilers ahead for season three of The Flash.]

Barry Allen's path to becoming Savitar has been made pretty clear. Should Savitar succeed in killing Iris West, Barry will eventually descend down such a path of darkness that the evil speedster will be born. Thus, the entire third season of The Flash hinges on Barry successfully saving the love of his life. But what if he doesn't? What if Iris dies?

In Tuesday night's episode of The Flash, Barry and his team were left stunned after Savitar plunged a spike through Iris' back — seemingly killing her. And while this is a scene The Flash has shown countless times this season, actually seeing it come to pass was absolutely shocking. If Iris West is really dead, it would appear that Savitar has won; he has successfully ensured his creation.

With one episode left in The Flash's third season, it is pretty likely that there are at least one or two surprises still in store for viewers. After all, it is very hard to believe that season three would end with Savitar winning — and not only because most seasons of television end with the good guy coming out on top. In the case of Savitar, we have seen what the future looks like when he wins, and it is not pretty.

Is Iris West really dead? That is likely what most are wondering after watching season three's penultimate episode. Sure, that thought may have come after some tears or the in-the-moment destruction of some property near the television, but eventually we all came to that question. While it sure seems like Iris died, that doesn't mean her story is over, and it certainly doesn't mean Savitar has won.

Was that really Iris?

Early in The Flash's third season, H.R. showed off a device that he could use to make his face look different to everyone around him. The purpose was to disguise himself so that normal people did not recognize him as Harrison Wells — a supposedly dead criminal on Earth-1. That device largely left The Flash's narrative until Tuesday night's episode.

While Barry and Captain Cold were breaking into ARGUS to steal the power source for the Speed Force Bazooka, Barry used that device to disguise himself as Lyla. In storytelling, there is a purpose for everything, and it does seem odd that after so many episodes the writers decided to bring that device back into play. So was that scene really used to foreshadow something else? Could somebody else have died in Iris' place? Maybe. It is already a popular theory on Reddit.

It is possible that another character on Team Flash used H.R.'s face-changing device to look like Iris. Of course, they would have had to do so without Barry knowing, so that Savitar would not have a memory of the deception. This is not necessarily the most likely scenario, but it is certainly possible. If this is what happened, the initial thought may be that it was H.R. who took one for the team.

This seems a bit unlikely, though, considering Savitar had gotten to Iris due to H.R.'s ineptitude. Of course, it's possible Iris and H.R. cooked up the plan long before that, or that the change happened during Barry and Savitar's brief fight. But it seems like we are reaching. Still, the fact that this device was brought up in the same episode that Iris dies forces us to wonder whether it played a larger role. And if it did, who did Savitar kill?

Iris is dead ... but it doesn't matter

Another possibility is that Iris did die. Savitar did what he set out to do: He killed Iris in front of Barry, thus ensuring his own creation. But what if it is not that simple? Barry already has knowledge of how he becomes Savitar. He knows that in the future he abandons his friends and descends into darkness. If he has that knowledge, can he prevent his own fate?

If Team Flash is able to band together after Iris dies, maybe Barry will never turn so dark that Savitar is born. Maybe, just maybe, after watching the video that Iris left him, Barry will be able to hold on to the person he was with her, and not fall into darkness, which would mean Savitar would never be born. What does that mean for Iris? Well, if The Flash were to try and remain consistent, Iris would still be dead.

After all, in season one, Eddie killed himself to prevent Reverse-Flash's existence. Yet after succeeding, he stayed dead. But still, with time-travel and the convoluted plots that result, it would be rather easy for the writers to explain Iris either not dying, or coming back to life, after Savitar ceases to exist. This does, though, seem astronomically unlikely due it being simply way too convenient.

We are all probably thinking it: Is Barry going to go back in time and try again? Maybe. Even though Barry has kept saying he would no longer time travel, he seems to keep doing it. He went into the future to learn Savitar's identity and in Tuesday night's episode, he went to the 19th century to pluck Captain Cold away from the Legends. So nothing is really stopping him from going back in time to save Iris.

If Barry is to do this, it is likely that there will be consequences, and perhaps that somebody would die in Iris' place. But the key to stopping Savitar does seem to be saving Iris, so it would be foolish not to at least explore this option. How Barry defeats Savitar after going back in time to save Iris — if this is indeed what he does — is unclear. We know the Speed Force Bazooka will not work, but something has to ... right?

The season finale of The Flash will air Tuesday, May 23 at 8 p.m. Eastern on the CW.