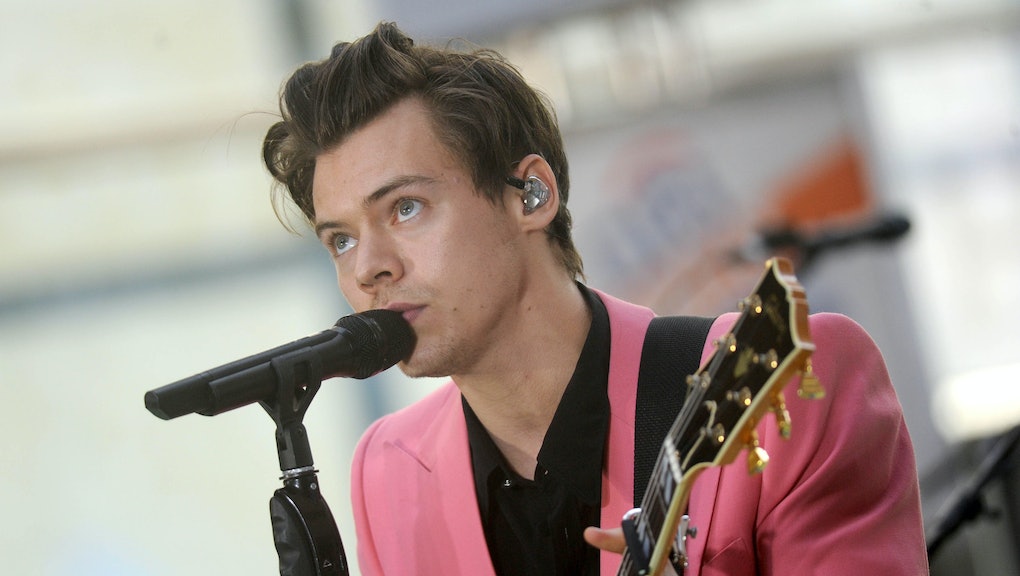 Who knew Harry Styles is human? The One Direction hunk has always operated in a space that gives the appearance of ultimate accessibility — the most devoted of fans can pinpoint his exact location at any given moment — and yet, no one knows much about the guy as an individual. Such is the life of the rich, famous and well-protected — we're only given a glimpse of an inviting image with an inviting filter, and when more is revealed, authenticity is often questioned, not accepted. It's the fine line between wanting more and being apprehensive of reality. On his self-titled solo debut album, Styles has begun to subvert that dichotomy, the disconnect so prominent in post-boy band schema.

When Justin Timberlake left *NSYNC to pursue a solo career, dissolving the group in his wake, the maturation shocked and confused his mostly young, mostly female fanbase. Gone were the sweet PG love songs; instead, Timberlake wrote explicitly about sex and explored R&B territory. That sonic and thematic transition mostly mirrors Zayn Malik's own departure from One Direction, who opted to make music in line with contemporary Top 40 — sounds far removed from his boy band days.

Styles' growth isn't too dissimilar from the 1D of his past, but with a distinct move toward adulthood: On Harry Styles, he opens himself up to us — via delicate moments of obvious bad-boy badassery — but doesn't drain away his mystique. He manages to create and maintain rock stardom. It would be completely unsurprising if his record is the first in a long while to debut at No. 1 without guest features or emulating the kind of music that tops the charts these days (i.e., not guitar music). Harry Styles could effectively prove rock 'n' roll commercially viable and relevant in a way he’s mastered: earnestly.

Harry Styles opens by inviting the listener into the studio with the 23-year-old Brit. Styles whisper-sings to count his band off, close to the mic. "Meet Me in the Hallway" is the result, with Styles bringing forth an immediate '70s rock sensibility. Regardless of the medical metaphor in the first verse — "Give me some morphine/ Is there any more to do?" — it feels decidedly less druggy than the Doors song that probably inspired it. The track builds to a soft chorus of "I gotta get better, gotta get better/ And maybe we'll work it out." The song's nebulous kind of intimacy serves to introduce an album filled with big feelings and evasive thoughts. After One Direction began their current hiatus, Styles took a break from the Top-40 spotlight — he avoided press and relished in privacy, he acted in the upcoming Christopher Nolan war Dunkirk — and from the very beginning of this record, he's drawing on a newfound sense of vulnerability.

Styles has always loved classic rock sounds more than any other — his Mick Jagger-esque appearance goes beyond that hair and those cheekbones. It's a fascination best heard in One Direction's later discography: the subtle maturation of 2014's Four and the folky introspection of 2015's Made in the A.M. Still, that sound is present throughout the entirety of their catalog — let's not forget that the biggest single from one of the biggest boy bands on the planet, "Best Song Ever," sounds dangerously similar to The Who’s "Baba O'Riley." On this album, Styles' classic rock worship is overt; he's even playing guitar, an instrument previously only associated with 1D's Niall Horan in small doses.

Going solo and becoming a largely uncensored artist has Styles revealing the insecurities that come along with being in love and being a rock star, regardless of the decade. He's impressed by a woman who "gets into parties without invitation," as if that is not his very regular reality, on "Carolina." He's infatuated with a dangerous woman on "Kiwi," where a comically captured cocaine sniff comes after Styles sings, "It's New York, baby, always jacked up / Holland Tunnel for a nose, it's always backed up". Consider it his most controversial Almost Famous moment.

"Only Angel" begins with a 45-second intro — a welcome introduction to side B of the album — before launching into a spirited blues banger best reminiscent of Styles' beloved Rolling Stones. The bare-bones acoustic ballad "Sweet Creature" riffs on the Beatles' "Blackbird," made modern by Styles' romantic range. The best moment on Harry Styles arrives near the beginning — the massive single "Sign of the Times," a six-minute Bowie-bowing endeavor that has Styles preparing for the apocalypse and finding hope in love at the end of days. It feels especially relevant, or, at the very least, reassuring, in an uncertain political climate.

A friend recently shared a theory with me — that every great album of the 1970s, excluding double LPs, runs about 45 minutes or less and ends with a ballad. Harry Styles fits that formula, drawing additional attention to the closer "From The Dining Table," in which Styles is his most fragile — nude and masturbatory: "Played with myself, where were you?/ I fell back asleep and I got drunk by noon/ I never felt less cool." The album is littered with grandiose classic rock moments, but it's his surprising exhibition and openness that highlights his humanity. Styles has always been larger than life, but now he's showing us the person inside. What's more rock 'n' roll than blurring the line between the two?