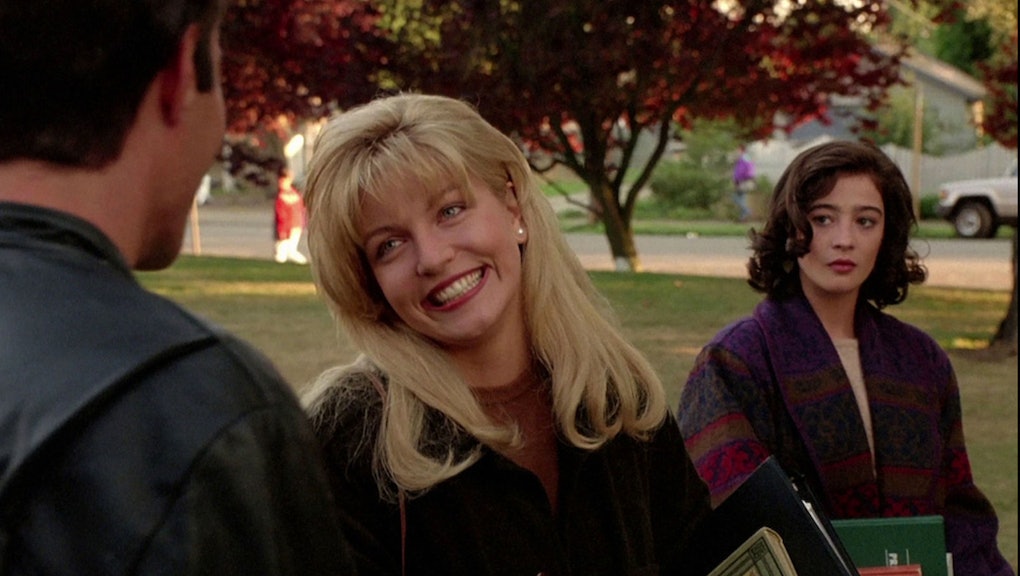 How the 'Twin Peaks: Fire Walk With Me' plot could factor into the Showtime reboot

It is happening again — even if we have absolutely no idea what's going to happen. It's still hard to believe that Twin Peaks is returning to the small screen, on Showtime, this Sunday — more than two decades removed from its cancellation on ABC. In an eerie, prophetic twist, Twin Peaks almost returned right at the 25-year mark in which Laura Palmer said she would reunite with FBI Special Agent Dale Cooper (alas, that would've been 2016).

The revival is shrouded in secrecy — and the characters are literally shrouded in fog in the promotional materials. The teasers have offered few words and even fewer clues on what season three will be about; members of the press aren't getting screeners. One of the few hints David Lynch offered, per a recent interview with Variety: The Twin Peaks movie is essential to understanding the new season.

That would be Twin Peaks: Fire Walk With Me, a divisive follow-up to the show's original run that serves as a prequel leading up to the grisly death of Laura Palmer. It's easy to see why many fans were upset (and why the Cannes audience booed the film during its premiere): Lynch had the opportunity to continue the story and provide answers to season two's cliffhanger finale, which saw Agent Cooper possessed by Killer Bob. Instead, the auteur opted to take us back to witness an event that we'd already learned the details of: Leland getting possessed by Bob, and Laura dying by his hand. Most uncomfortably, we also see Leland rape Laura in her bed.

The reception to Fire Walk With Me has improved over time — you can catch recent think pieces defending the film, finding merits in its distinctly Lynchian properties. What's unclear is how this prequel ties into the revived series, and what we need to learn from it in order to prepare for Twin Peaks' return. Here are three elements of Fire Walk With Me that we expect will factor into the new season of Twin Peaks in a big way.

The introduction of Deer Meadow

Fire Walk With Me essentially has a 30-minute prologue, in which a different FBI agent, Chester Desmond, investigates the murder of a woman in the fictional town of Deer Meadow, Oregon. The entire sequence — the setting, the local police, even the damn diner — intentionally feels like an inverse of Twin Peaks. Where Twin Peaks is a lush, picturesque (if not a bit haunting) northwestern town, Deer Meadow feels barren and soulless. The police aren't helpful — they're actually quite hostile toward Agent Desmond, and in a move that would break Cooper's heart, only offer him days-old coffee. As the owner of the diner callously tells Chester and his colleague, don't ask about the specials: They don't have any.

Lynch disclosed in the Variety interview that the series revival will include settings outside of Twin Peaks. "There are different threads in different parts of the U.S.," he said.

How, and why, parts of the new season will take place outside of Twin Peaks is unclear. A Deer Meadow return makes sense, given the murder of Teresa Banks was also at the hands of a Bob-possessed Leland and the fact that Harry Dean Stanton is returning as Carl Rodd, the owner of the trailer park Teresa lived in. Bob's influence — and other entities that reside in the extra-dimensional, diabolical Black Lodge — doesn't appear to be unique to Twin Peaks, and a macro view of how the Black Lodge has left an impression on other towns could prove to be fertile ground for new exploration.

There's apparently a reason the entities of the Black Lodge possess and torment people, and it's to consume something called "Garmonbozia," or as I'd rather refer to it, "evil garbanzo beans." Garmonbozia is as weird as it sounds: It's some kind of synthesis of human pain and suffering, which beings in the Black Lodge feed on. It's shown in Fire Walk With Me, after Laura's murder, and is reminiscent of lumpy creamed corn.

Presumably, Garmonbozia appears every time a heinous act involving those from the Black Lodge is committed. One would assume Teresa Banks' death in Deer Meadow also created Garmonbozia for the Black Lodge creatures to feed on. So does this mean Agent Cooper also — albeit unintentionally — made Garmonbozia when he tried to escape the Black Lodge with Annie at the end of season two?

During one of Laura's lucid dreams in Fire Walk With Me, she finds a bloodied Annie in her bed, who offers her a warning: She wants Laura to write in her diary that "the good Dale" is still trapped in the Black Lodge and is unable to leave. That brings us back to the season two finale: Bob is possessing Agent Cooper in Twin Peaks, dooming the real Agent Cooper to the Black Lodge.

This could mean that there are two potential solutions in the Twin Peaks revival: Either Cooper found a way to get his body back, or he's been trapped in the Black Lodge this whole time, leaving Bob in control. The latter is quite unlikely — how would Cooper leave things off in Twin Peaks with Harry and the rest of his friends? If the final scene of season two — Cooper ramming his head into a bathroom mirror, laughing maniacally — is any indication, Harry and co. would immediately know something's wrong with Cooper, and probably apprehend him. (On a sour note, it's perhaps unlikely Bob will factor into the new Twin Peaks as we've come to know and fear him, since Frank Silva died of HIV in 1995).

If Cooper did escape the Black Lodge, it's possible Laura was able to help him post-mortem. Her essence, as well as Leland's, is still present in the Black Lodge — plus, Sheryl Lee and Ray Wise are confirmed to reprise their roles.

Even for Twin Peaks and Lynch, Fire Walk With Me is a bizarre and, most of all, morose experience — devoid of the campy soap opera cliches and silly romantic subplots that made the series' tone more appealing to the masses. Despite the film's recent wave of support, Fire Walk With Me won't ever be held in the same esteem as Twin Peaks proper. But for fans looking to reacquaint themselves with the show after it's spent more than two decades off the air, it's still required viewing.