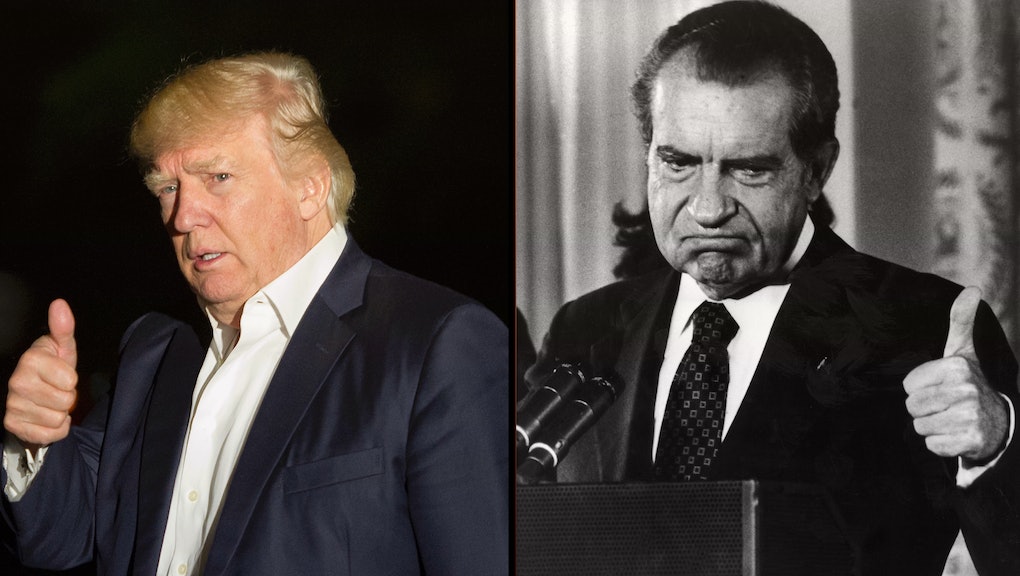 Republicans had a breaking point with Nixon. Will they with Trump?

When will the Republican Party decide to dump President Donald Trump?

A "small but growing" number of Republicans are calling for an independent investigation into the Trump campaign's Russia ties, according to Reuters. Sen. John McCain (R-Ariz.) said Tuesday that Trump was facing scandals of "Watergate size and scale." And on Wednesday, Rep. Justin Amash (R-Mich.) said that if the Comey memo is true, it would be grounds to impeach the president.

But most Republicans have been more "restrained" in their response to the explosive reports that have plunged the White House deeper and deeper into chaos. House Speaker Paul Ryan (R-Wis.), who avoided reporters' questions Tuesday, said Wednesday in a news conference that he still has confidence in Trump — and said Republicans had a "once in a generation" opportunity to enact tax reform.

Republicans are "choosing party over country," Senate Minority Leader Chuck Schumer (D-N.Y.) said Sunday. But as comparisons between Trump and former President Richard Nixon continue to fly, some have begun to point out that Republicans stood by Nixon during the Watergate scandal, too — until they didn't.

Here's what it took for the party to move away from Nixon — and what it teaches us about how Republicans are navigating the Trump scandals.

Not only did Republicans continue to back Nixon after five men were caught trespassing at the Democratic National Committee headquarters in the Watergate building during the summer of 1972 — Nixon was re-elected that fall in a landslide over Democrat George McGovern.

According to polls conducted by the Nixon campaign at the time, the Washington Post reported, more than two-thirds of voters said they wouldn't be any less likely to vote for Nixon if it was discovered that top Republicans were involved in the DNC break-in — and most that summer saw it as "just politics" as opposed to "very serious," according to the Post.

But as the scandal went on, public opinion began to shift.

In 1973, Archibald Cox was appointed independent prosecutor to investigate Watergate — something about 75% of Americans believed was necessary to get to the truth, according to May 1973 polls cited by the Post.

In October of that year, Nixon fired Cox and accepted the resignations of his attorney general and deputy attorney general in what would become known as the "Saturday Night Massacre." More than 50,000 Americans sent telegrams to Washington over the firing, and 21 members of Congress called for Nixon's impeachment.

Nixon appointed another special prosecutor, Leon Jaworski, to lead the probe — but, according to the Post, after refusing to provide Oval Office tapes to the Senate investigation in 1973, his approval rating would never again rise above 38%. Further, Americans in polls said they were less likely to vote Republican due to the Watergate scandal. And while more Americans than not over the course of 1973 and early 1974 did not believe Nixon should have to resign, the gap closed drastically by that spring.

Still, columnist David Leonhardt noted Wednesday in the New York Times, "most Republicans stayed loyal to Nixon" — and a majority of Republicans on the House Judiciary Committee voted against Nixon's impeachment. As FiveThirtyEight reported, Republicans at the time argued that "investigations of the president were overly aggressive" — sound familiar? — and future presidents Ronald Reagan and George H.W. Bush each told Nixon he could weather the political storm.

Everything changed for Nixon in July 1974, when the Supreme Court ruled unanimously that he must release the "smoking gun tape" — a recording of Nixon and H.R. Haldeman, his chief of staff, speaking in the Oval Office that revealed the president had attempted to end the FBI investigation into the break-in.

Nixon released the tape on Aug. 5.

Goldwater told Nixon that he had, at most, 18 supporters left in the Senate, and Rhodes told him that he had lost support in the House as well — he was facing almost certain impeachment.

Nixon announced his resignation the next day.

Trump doesn't appear to be quite in that territory yet. Despite increasing buzz about Trump's potential obstruction of justice, a lot would still probably need to happen before impeachment becomes a serious possibility — and it would still likely be a tough battle within a Republican-controlled Congress.

Still, as Leonhardt wrote Wednesday, it took just a "small portion of Republicans" standing up to Nixon to hold him accountable.

"Today, once again, the country needs a few principled and patriotic Republicans — to conduct a truly independent investigation of Trump, his campaign, his business, Russia and the resulting abuses and cover-ups," Leonhardt wrote. "Senator Sasse? Senator McCain? Senators Susan Collins, Jeff Flake, Lisa Murkowski, Cory Gardner, Dean Heller or Bob Corker? Are you willing to stand up to an out-of-control president?"