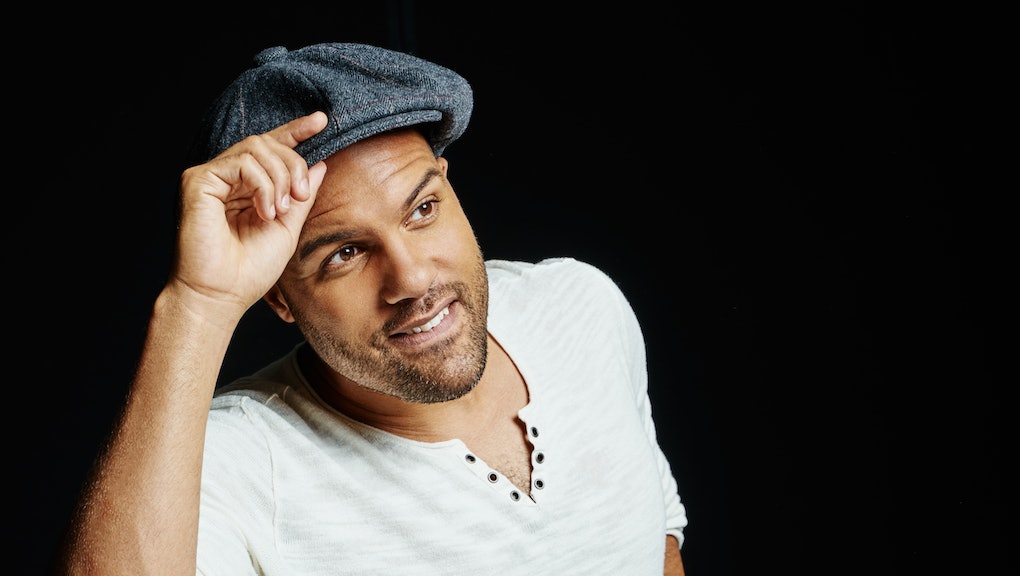 Throughout the first six episodes of Hulu's The Handmaid's Tale, Luke, husband to the captive handmaid June, is nothing but a memory. As played by O-T Fagbenle, he pops up in flashbacks: to the early days of the dystopian theocracy of Gilead, and even to when Luke and June first meet. But in the current timeline, as June tries to survive in an oppressive, misogynist regime, Luke is presumed dead — or, at least, he was.

At the end of episode six, "A Woman's Place," a Mexican trade delegation associate gives June news she can't fathom: Luke is alive. The episode ends on June, played by series lead Elisabeth Moss, quickly writing a message to him — a message he receives in Wednesday's new episode, "The Other Side," now streaming on Hulu.

Only two main cast members are credited in "The Other Side:" Elisabeth Moss, who appears in flashbacks as June, and Fagbenle. This is Luke's focus episode, as we follow him through his family's attempted escape from Gilead and how he winds up in Canada working within resistance efforts. When, at the end of the episode, he receives June's note and learns she's still alive, he weeps tears of joy.

It's a showcase for Fagbenle, one that reveals a whole new aspect to the Handmaid's Tale universe. Mic got on the phone with Fagbenle ahead of the Hulu premiere of "The Other Side," to talk about shooting the episode, his personal process with Luke and his role as a man on a feminist TV series. This interview has been edited and condensed for clarity.

Mic: When in the production of The Handmaid's Tale did you learn Luke would be getting this big spotlight episode?

O-T Fagbenle: Really early on, as I was first signing up. I was told that we find out that Luke is still alive, and that we'd find out what happened to him.

Luke has previously only been present in flashbacks, and in "The Other Side," we finally see him in present day. How does your approach change when you're filming scenes where he's in such a different place and time?

OF: To some extent, as an actor, wherever you come into a character's story, you have to do the work of imagining their life up to that point. If I'm gonna go play Hamlet, I have to imagine I've been the prince of Denmark for the past 20-something years, and then here I am. So it's quite natural, whether we're jumping three years ahead or whatever, that I would have an imaginative idea of what happened to him during that time. I also did research on post-traumatic stress and other correlating subjects that might give some insights on where he might be.

Your character, more than any of the others, lives in specific time periods during the flashbacks. Is it difficult at all to keep those beats separate?

OF: To be honest, because we flash back and forward, my journey with Luke is dependent on what episode number we're on. I just have to take huge shifts and go, "Where am I on this journey?" I have a timeline mapped out in my mind for that.

When we do meet Luke in Little America, in Canada, three years later, he seems almost relaxed — that is, until he's given June's note and learns she's alive. What headspace is he in?

OF: Yeah, it's interesting: Once he climatizes and deals with the trauma that happened — very often, it's something you push down deep into your stomach. When the [note] comes up, it reveals everything he's been compressing.

That note reads, "I love you so much. Save Hannah." Are we going to see more of his journey to save his daughter?

OF: I certainly hope so.

In "The Other Side," we see Luke having to learn how to shoot a gun to fight back against Gilead. Is it safe to say he was a pacifist before the uprising?

OF: No, I don't think I'd go so far as "pacifist." True pacifists are extraordinary people who stand by their nonviolence at any cost. But he's definitely not someone who is versed in violence. He's never had to defend himself, and I think that's true of, to be honest, most men. Most men haven't been in a fistfight in the last two weeks. Most men have never shot a machine gun. It begs the question: Should shit really hit the fan, and there was insurrection, how capable would most of us be? ... With Luke, we get to see an everyday man against the odds.

You mention men specifically, but later in the episode, June asks Luke to teach her how to load the gun. There's an equal nature to their relationship.

OF: Interestingly enough, I always felt that June was the slightly more dominant one in the relationship anyway. Dominance is different than domineering — they have a relatively equal relationship. But, for example, in our original scripts, she's the one who pays for the hotel [in episode five, "Faithful"]. She makes various decisions along the way. ... I think she's a very strong character, and that was a fun dynamic to explore.

The episode ends on a close-up shot of Luke's face as he cries. What was the process of shooting such an intimate scene? Was it a multi-take process?

OF: Sometimes, as an actor, when your intuition fails you, you have to use your techniques. From drama school, you have lots of methodologies ... but from the very first draft [of "The Other Side"] I read, I was just really moved by that scene. I cried the first time I read it. Filming it, being in that situation and having a folder with my family's history in it, then meeting this woman and reading that note — we didn't shoot it a bunch of times. Just a couple of times.

Did your director, Floria Sigismondi, have any particular notes for you on the scene?

OF: You know, what's great about directors like Floria is that they know when to step in and know when to step out. There's a great trust between us; she will come in and poke and nudge and encourage when necessary. But there wasn't really any discussion of that last scene.

Jumping back to "Faithful" for a second: In that episode, we see June and Luke fall for each other, even though he's married. When she asks him to leave his wife, he immediately agrees. From your perspective, what inspired that easy decision for him?

OF: Man, I don't know if you've ever fallen in love hard, but I think, in my life experience, there's not much you can do when it hits you like that. Luke falls so hard in love with this woman that there's no option for him.

Was there ever a point for you where you judged Luke's affair?

OF: There are so few decisions in life that have no cost to anyone else. There's an opportunity cost to every decision, and obviously, if you make a commitment to someone and you break that commitment, that comes at a great cost to them. It's also sometimes the case that if you stay in a commitment reluctantly, that can be detrimental to both people. ... It's so complex, and I think it was for Luke. So yeah, absolutely, he was torn up by having to break his bond and really let someone down. That's not positive at all. But I'm not sure he had much of a choice.

I think that's what's interesting about the show. There are no easy answers. There's no right or wrong. Would it have been better for him to stay in a relationship that wasn't working, and to have never had a child? To never be with the woman he fell in love with? Who knows! But the show brings up some difficult, nuanced questions.

As a man in an ensemble on such an explicitly feminist show, how do you see your role on that set?

One last question for you: I was a big fan of Looking, which you recurred in during the first season as Agustín's boyfriend Frank. How does a set like that compare and contrast with The Handmaid's Tale's?

OF: I think the main difference is that Looking was something of an understated, naturalistic piece. It flew under the radar and gained this beautiful cult following. Whereas, from day one, with [director] Reed Morano's vision [on Handmaid's Tale], we knew we were dealing with a huge program, something which had huge, global scope. Those are the main differences — but actually, I feel they had more in common than [not].

In both of them, we had these extraordinary leads, Jonathan Groff and Elisabeth Moss. I cannot press on you enough just how gorgeous both of these people are, and what kind of grace, skill and charm they bring to the set. It's a joy to work with people like that. ... When you work with fantastic people, that outshines any other kind of difference.

"The Other Side" is available on Hulu now.