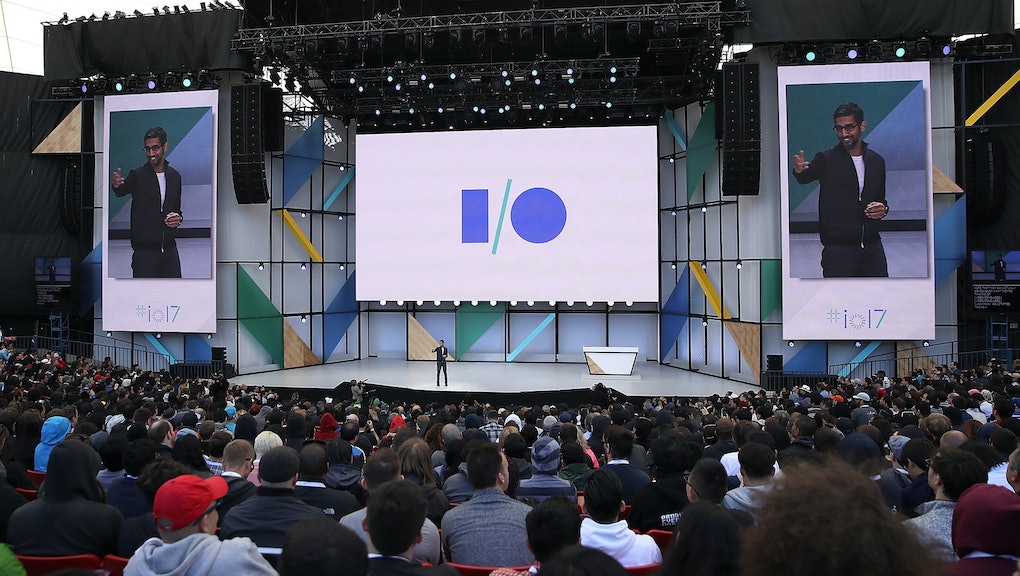 At Google's annual I/O developer conference, the tech behemoth shows off its latest apps, software updates, the numerous new ways it'll own you, some new hardware and other visions of its future. Too bad it's still a future where women are granted a third of the speaking time men get on one of the biggest stages in tech — an industry already plagued by issues of discrimination.

High-profile developer conferences like I/O and Apple's WWDC are traditionally male-dominated events, and so are the product launches that bring us the latest iPhone and Pixel devices. We've been tracking gender diversity on these stages since Apple's 2016 keynote event, where men received 93% of the speaking time. (A rep later emailed to say we had "different interpretations of diversity" and protested that Apple had a Canadian onstage.) Google has performed slightly better: At October's Made by Google event, men spoke for approximately 62 minutes while women spoke for about 10.

So how much time did women get at Google's 2017 I/O? At this year's conference, men spoke for 1 hour, 20 minutes and 55 seconds. Women spoke for 23 minutes and 22 seconds. There were seven men and five women onstage — a big improvement over 2016's Made by Google event, which featured six men and only two women.

Intersectional diversity onstage at I/O was abysmal. Of all the women who spoke, there were no women of color.

After this story was published, a Google spokesperson emailed Mic a breakdown of the demographics of both the speakers and attendees. The spokesperson said this is the first year the company tracked representation onstage.

The spokesperson said Google is working on increasing representation for women and people of color and that it would like to see the numbers go up each year.

It's progress to see more women onstage, period. But there's still a lot of room to grow, specifically in more evenly distributed talking time and more intersectional diversity. Events like Google's I/O are a forward-facing example of the company's commitment to diversity and inclusion, and it's also an opportunity to showcase role models that don't "fit the mold."

Silicon Valley would be wise to keep working on this problem. It's not just women in tech who would stand to benefit — it's the industry's profits, too.