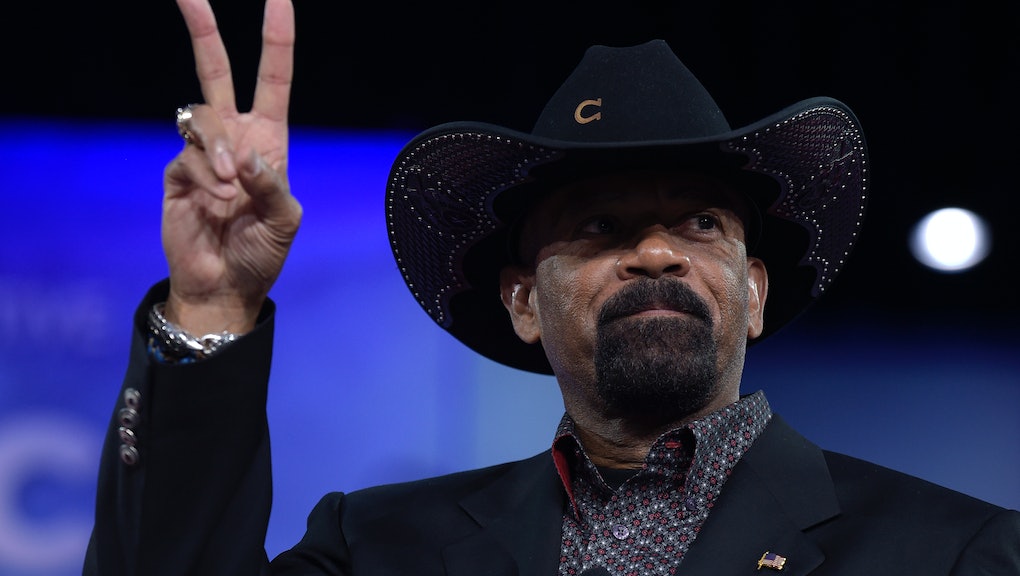 Milwaukee County Sheriff David Clarke went on conservative talk radio on Wednesday — in advance of any announcement from the Trump administration — to announce that he will be accepting a position as assistant secretary in the Department of Homeland Security's Office of Partnership and Engagement.

I can think of few men more uniquely unqualified to liaise with local law enforcement at this juncture, when the agency is ramping up immigration raids, filling detention centers (including with children) and carrying out deportations as fast as possible (including, in at least one case, without verifying the person's legal status).

Recent revelations about the conditions in the Milwaukee County Jail — a facility managed by Clarke — have shaken my community to its core. Four people, including a newborn baby and a mentally ill man, were found dead in Clarke's jail during a six-month period last year.

Clarke has barely acknowledged the incidents in public — which is uncharacteristic of the Tea Party firebrand known for his no-holds-barred persona, aggressive rhetoric and boisterous social media presence. Silence is practically uncharted territory for him.

Clarke's whereabouts during the deaths of prisoners in his jail provides possible clues to his reticence.

But Clarke's whereabouts during the deaths of prisoners in his jail provides possible clues to his reticence: He was off promoting his new book, campaigning against Hillary Clinton, and collecting more than $145,000 in speaking fees, travel reimbursements and gifts from conservative out-of-state groups.

For instance, after Clarke's staff cut off water to the cell of Terrill Thomas for seven consecutive days as punishment for bad behavior, Clarke was in New York City accepting nearly $10,000 for a speech at a seminar on April 18, 2016 during which he called universities "nothing more than laboratories of liberal indoctrination."

Jail employees reportedly ignored Thomas as he cried out for water. His screams could be heard across the cellblock. Days later, as Clarke was appearing on Hannity to vilify Hillary Clinton, Thomas, who was bipolar, had lost 35 pounds and could barely move. Hours later, his heart stopped beating. His death was ruled a homicide due to "profound dehydration."

A grand jury recommended criminal charges against seven of Clarke's staff in Thomas' homicide, but according to Milwaukee County records, no one has been fired, demoted or placed on administrative leave. The Milwaukee County Sheriff's Office hasn't admitted any wrongdoing and there is no evidence that jail policies are being reviewed in response to this tragedy. Only this week, we learned two additional inmates had their water cut off even after Thomas' death.

Shortly before Kristina Fiebrink was found dead on the floor of her cell, Clarke was on a private jet to Illinois to speak at a banquet hosted by an ESPN radio personality. The day after she died, he was back on Fox News chastising Beyoncé for working with the mothers of Michael Brown, Trayvon Martin, and Eric Garner.

And in the hours before Michael Madden lost his life in Clarke's jail, the sheriff was again on the road — this time in Massachusetts, receiving nearly $2,000 in reimbursements to speak before a conservative police association. No one from Clarke's office took the time to reach out to Madden's mother to discuss the autopsy results. She told the Milwaukee Journal Sentinel she had to read about it on a right-wing website that supports Clarke.

Shadé Swayzer was eight and a half months pregnant when she was booked into Clarke's jail in July 2016. During her incarceration in the Maximum Security Unit, Swayzer went into labor. According to court documents, when she alerted a correctional officer that her water had broke, the officer laughed at her and ignored her plea for medical attention.

Four hours later, shackled and alone in her cell, Swayzer gave birth to a baby girl. Two hours after that, Clarke's staff realized there was a newborn infant in the cell with her. Shortly thereafter, the baby was dead.

As for Clarke, he was being reimbursed nearly $1,500 to address a group in Georgia just after Swayzer's newborn daughter took her first and final breaths in the facility that Milwaukee residents elected him to oversee.

And yet, Clarke has not seen fit to address those residents at any length about these troubling incidents for which he has chosen to shoulder responsibility.

It's hard for some to fathom how a city's top law enforcement official could be so shameless and cavalier with his conduct, but my constituents are all too acquainted with Clarke's antics. This is a man who lives to inflame and loves to provoke. His rap sheet speaks for itself.

David Clarke is a man who lives to inflame and loves to provoke. His rap sheet speaks for itself.

During his tenure thus far, Clarke advocated vigilantism in lieu of dialing 9-1-1, called for citizens to revolt against the government with "pitchforks and torches," and abused the power of his office by reportedly having deputies interrogate a man at an airport who merely shook his head at him on a flight. He regularly mocks local leaders, ridiculed our mayor for being severely beaten while protecting a grandmother and her family, and used the official Milwaukee County Sheriff's Office Facebook page to promote his book, bully constituents and settle political vendettas.

Still, his cringeworthy behavior earned Clarke the admiration of extreme Tea Party activists, awards from groups like the Conservative Political Action Conference, and a $40,000 trip to Russia financed by the National Rifle Association along with around $30,000 in ad buys.

Most of all, it put him on the radar of an ambitious and wealthy conspiracy-wielding businessman with a vast following of supporters: President Donald Trump, who has apparently brought Clarke on board his team in the assistant secretary position at the Department of Homeland Security.

Rewarding Clarke's fatal and persistent malpractice with a job in his administration speaks volumes about Trump's character and sheds even more light on the flagrant insincerity of the self-proclaimed "law-and-order candidate." It also helps me understand why the Justice Department under Attorney General Jeff Sessions was profoundly disinterested in responding to my repeated appeals for a federal investigation into Clarke's jail.

Nonetheless, I will continue to push Wisconsin Gov. Scott Walker, and the Justice Department to hold Clarke responsible. But in the meantime, the agency focused on federal preparations to combat terrorism should start preparing to inherit a law enforcement official who prioritized his "personal brand" and partisan fame over his constituents' safety; who cared more about his office looking bad than doing good.

At least now, Milwaukee can finally find a sheriff who will actually show up for work. But we can never stop our shared efforts to find justice for the families of Terrill Thomas, Michael Madden, Kristina Fiebrink and Shadé Swayzer's baby girl.