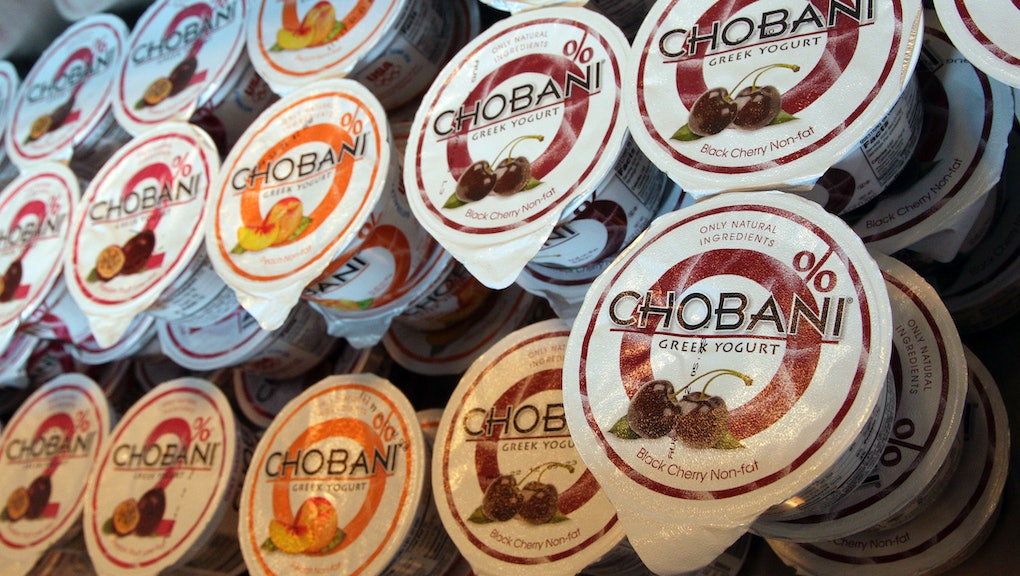 After Chobani, a yogurt company, announced it would be suing Alex Jones, the rightwing conspiracy theorist behind InfoWars, Jones insisted that he would not be "backing down."

Less than a month later, according to the New York Times, he did precisely that, reading off an apology during his Wednesday night dispatch that signaled a settlement.

"During the week of April 10, 2017, certain statements were made on the InfoWars Twitter feed and YouTube channel regarding Chobani L.L.C. that I now understand to be wrong," Jones said.

Jones was referencing inflammatory stories — under the headline "Idaho Yogurt Maker Caught Importing Migrant Rapists" — that ran on his site and its Twitter feed connecting refugees employed at a Twin Falls factory and the sexual assault of a child. The yogurt company filed a defamation suit against Jones on April 24, alleging InfoWars erroneously accused Chobani and its CEO, Hamdi Ulukaya, of bringing "crime and tuberculosis" to the community.

"I'm not backing down. I'm never giving up. I love this," Jones told followers after the lawsuit was filed. On Wednesday, a Chobani spokesperson confirmed to the Times that "the case has been resolved." In his apology broadcast, Jones stated:

The tweets and video have now been retracted and will not be reposted. On behalf of InfoWars, I regret that we mischaracterized Chobani, its employees and the people of Twin Falls, Idaho, the way we did.

It's not the first time Jones has retracted a faulty story in 2017. After 28-year-old Edgar Maddison Welch pleaded guilty to firing an AR-15 in a Washington, D.C. pizzeria in March, Jones issued a correction and an apology on the false "Pizzagate" theories he'd helped propagate about the restaurant, which apparently motivated Welch. Jones and InfoWars had peddled rumors that the establishment, Comet Ping Pong, was running a child sex ring implicating Hillary Clinton and her campaign manager, John Podesta.

"I want our viewers and listeners to know that we regret any negative impact our commentaries may have had on Mr. Alefantis [James Alefantis, the restaurant's owner], Comet Ping Pong or its employees," Jones said, according to NPR. "We apologize to the extent our commentaries could be construed as negative statements about Mr. Alefantis or Comet Ping Pong, and we hope that anyone else involved in commenting on Pizzagate will do the same thing."