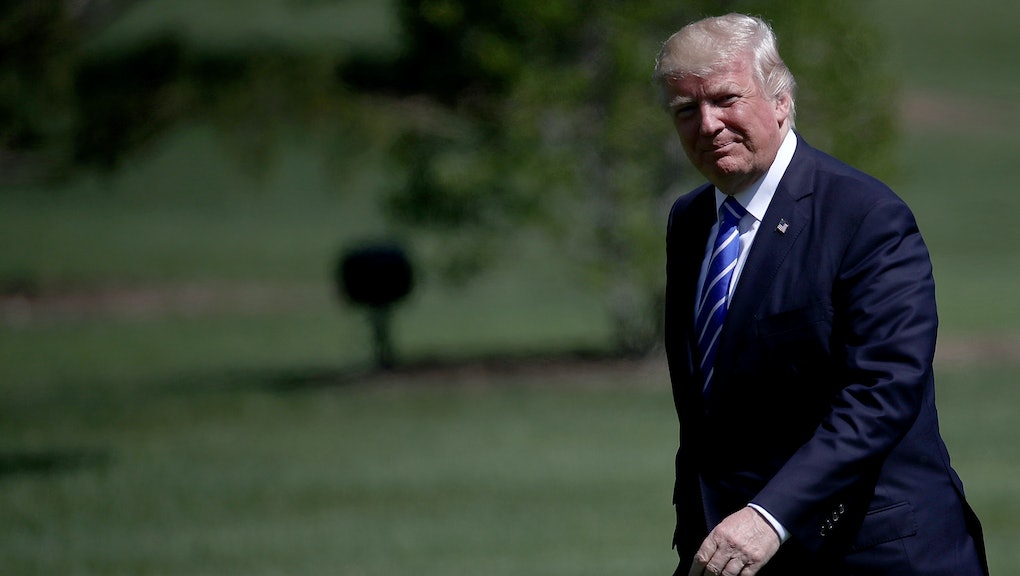 Why the special prosecutor will stall Donald Trump's entire agenda

On Wednesday evening, Deputy Attorney General Rod Rosenstein appointed a special counsel to investigate ties between the Trump campaign and Russia. Democrats have already begun framing the 2018 midterm elections as a referendum on whether Trump should be impeached. And Republicans are roundly supporting the latest news in the Russia investigation.

The announcement will hurt Trump's ability to do what he says he does best: make deals, potentially putting the brakes on education, tax and health care reform. And that's assuming nothing damning comes out of this investigation — a far-from-certain conclusion

This is Mic's daily read on Donald Trump's America. It really is incredible how things have developed in the past week. Take a deep breath, and read on.

The president isn't backing down: "This is the single greatest witch hunt of a politician in American history!" the leader of the free world tweeted.

Let's review the latest on the special prosecutor

Washington was already reeling from reports Trump disclosed classified intelligence to Russian officials and pressured former FBI Director James Comey to not investigate former national security adviser Michael Flynn. Then Rosenstein announced another former FBI director would lead a special inquiry into everything Russia. Top Republicans and Democrats in Congress praised the choice of Robert Mueller, the FBI director for 12 years under presidents George W. Bush and Barack Obama, to lead the investigation.

Mueller's charge: "To investigate Russian interference with the 2016 presidential election and related matters." Rosenstein, who has oversight of the Russia investigation because Attorney General Jeff Sessions recused himself, gave Mueller broad discretion to investigate what he deems necessary. Rosenstein's letter says Mueller will take control of the investigation that Comey confirmed existed in March.

Remember: Rosenstein threatened to resign last week over the White House blaming him for Comey's firing.

It's worth keeping in mind that this is not like the congressional committees that look into matters like Benghazi or what happened on 9/11. This is a criminal investigation, seeking evidence that could hold up in court.

But the congressional investigations will continue. On Wednesday, a bipartisan chorus of lawmakers called for copies of Comey's memos and for him to testify before Congress. Republicans, not long ago at odds with Comey, are now anxious for his testimony. My story on that here.

No one is defending Trump — but Trump himself. After two days of silence, his Twitter account came to life: "With all of the illegal acts that took place in the Clinton campaign & Obama Administration, there was never a special councel appointed!" (Yes, "counsel" was misspelled.)

Some top Republicans, though, have chimed in — barely. "I welcome his role at the Department of Justice," House Speaker Paul Ryan (R-Wis.) tweeted of Mueller. The appointment "confirms the investigation into Russian intervention into our election will continue," Senate Majority Leader Mitch McConnell (R-Ky.) added, without actually adding much.

A Reuters addition on Thursday morning: Trump associates, including Flynn, had 18 calls and emails with Russian officials during the last seven months of the campaign. A little more: Senate investigators will begin using a massive, federal database of bank transfers to track interactions between Trump associates and Russian businesses.

It's worth noting none of this changes the conclusion, to date, that there are no signs of collusion between Trump and Russia.

The special prosecutor news was far from Wednesday's only major revelation

The New York Times reported Trump's team knew Flynn was under investigation when he was hired as national security adviser. Flynn actually told Trump staffers he was under investigation for working as a paid lobbyist for Turkey. That news raised questions about past White House statements about Flynn. Vice President Mike Pence, then the head of Trump's transition team, said in March he did not know during the transition that Flynn had lobbied for Turkey. So did some members of Trump's team know, while others — including the vice president-elect — were kept in the dark?

The Washington Post published a transcript from June of House Majority Leader Kevin McCarthy (R-Calif.) saying Trump was likely on Putin's payroll. Ryan, who was there, interjected and asked that there be "no leaks" of McCarthy's words. Spokespersons for both McCarthy and Ryan initially denied the conversation took place — until they were told a recording existed.

•  "Net neutrality is doomed if we're silent." That's the appraisal of an FCC commissioner who warned the Trump-backed FCC head may reverse Obama-era rules that mandate that internet providers not favor or block websites. (Tech Crunch)

Join us at patreon.com/trumpsamerica to support Navigating Trump's America.