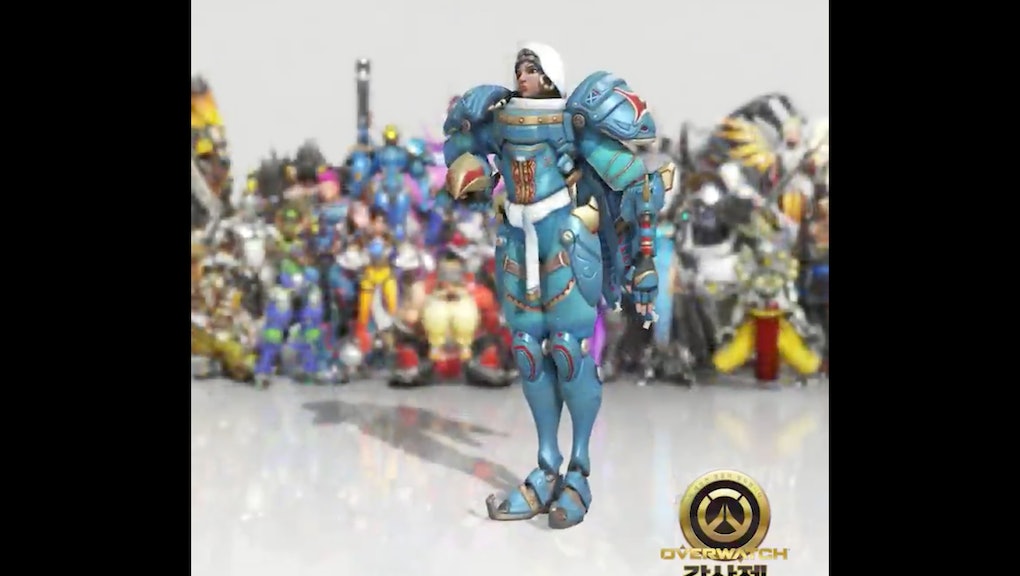 Announcements for the Overwatch Anniversary event are already coming hard and fast. In addition to the new arena maps and new dancing emotes, we've also gotten a glimpse at some new skins.

These four skins — for Bastion, Soldier 76, Pharah and Zarya — are very different from the event skins we've seen previously.

On the Twitter page for Overwatch Korea, a brief video was posted that featured four new skins.

The first thing that you might notice is, although there is common ground in the fact that they all have unique colors and shapes, there doesn't seem to be an obvious theme for any of these skins.

The Bastion skin looks a bit more futuristic than normal with the bright colors and round shapes. He also kind of looks like the Pixar lamp.

The Pharah skin seems to be an attempt at connecting Pharah to Egypt. You can see the white headscarf and belt, typically associated with desert environments and the Middle East/North Africa region specifically.

This Soldier 76 skin shows him wearing bright orange and also having seemingly cybernetic legs. This might end up being a bit of a reveal for the character.

Or, as my roommate hypothesized, maybe they cloned him and this is actually Soldier 75, or something.

Finally, we have Zarya, who looks undeniably the most different from her usual in-game skins. In fact, she looks a lot closer to skins that she already has in Heroes of the Storm. That's particularly funny because Stylosa, a popular Overwatch personality, previously made a video about wanting those Heroes of the Storm skins in Overwatch.