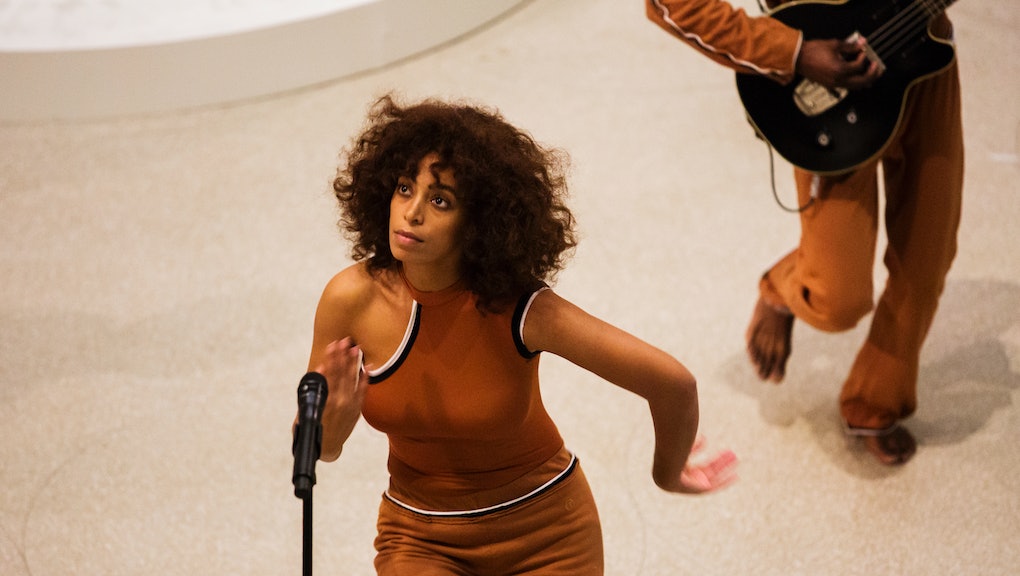 NEW YORK — So much of the beauty of A Seat at the Table, Solange's intimate 2016 R&B masterpiece, could not necessarily be found in its delicate grooves or plainspoken poetry. Despite being rich enough to inspire a college syllabus dedicated to "resisting racism, understanding gender and sexuality and nurturing ourselves," a significant portion of its power lies in what's unsaid or unplayed.

The record's beautiful, bare-bones arrangements leave so much open for interpretation. Depending on one's mood or perspective, the chords of "Scales" can be exultant or tragic; when Solange answers "I do" to the question of "Do you belong?" on "Weary," she could either sound confident or indignant. On Thursday, the 30-year-old visionary expounded upon the album's mutability during her Red Bull Music Academy "An Ode To" performance at the Guggenheim. It was a piece designed to be a "meditation on themes" of the record, featuring "movement" and "experimentally reconstructed musical arrangements."

Solange brought a full band (complete with horn section) and more than 40 dancers, but with careful management of the space and inventive choreography, she managed to make the massive group look like a tight-knit family. Watching their fluid processions, the company felt like a single instrument that was there to help Solange build and sustain energy, beginning with their serene, balletic introduction and ending with a liberated soul party right in the museum's central rotunda.

The bulk of the 200 or so audience members sat on the floor at the bottom of the rotunda, while the rest of the crowd looked on from the various tiers. Solange began the show by walking determinedly down the spiral with her dancers, and then performing A Seat at the Table's understated opener "Rise," drawing out the song, repeatedly hammering out its layered harmonies in measured bursts.

As the dancers filed back up the rotunda, the band transitioned into "Weary" and "Cranes in the Sky," and Solange gave space to her backup singers, Franchelle Lucas and Isadora Mendez-Scott, allowing them to push their powerful voices into the songs' hollows.

At times, the music was quiet enough to hear the padding of dancers' feet on the Guggenheim's cold floor. At others, the dozen horn players spaced themselves along the rims of the building's spiral to blast the entire white-walled hive with sound. During a new rendition of the pensive "Mad," the dancers lined up and screamed their lungs out in unison, acting on the song's promise: "You got the right to be mad."

Five years ago, few would have expected Solange to issue a statement as full and bountiful as A Seat at the Table, or a stage show quite as powerful or transformative as "An Ode To." Her breakthrough release, 2012's True EP, offered a strong, soulful portrait of an artist seeking her identity, but it contained only about 28 minutes of Blood Orange produced neon-washed '80s soul. It didn't attempt to grapple with the lingering wounds of history or create a pathway for others to find solace and resilience, as A Seat at the Table did when it dropped in September.

We were only on the cusp of an open cultural and political crisis then, and a lot has changed since then. Our country elected a president who's surrounded himself with living incarnations of white nationalism, who busies himself by creating legislation based on fear-mongering, discriminatory rhetoric. He's talked about curbing certain people's freedoms of religion, press and speech, while trying to pass himself off as the most persecuted political entity in history.

This moment, Solange's "Ode" felt like a necessary pause from all of the noise and toxicity that's been dominating headlines for the entirety of 2017.

As the performance drew to a close, its rigid elegance began to dissolve into music and movement that was far more free and cathartic. In full contrast with the stiff, synchronous choreography of the opening numbers, Solange twerked during the breakdown of "F.U.B.U." She had transformed the space. Museum etiquette no longer applied. She walked through the crowd to giddy, nervous head bobs and knelt down face-to-face with various black audience members, singing the song's hook:

Made this song to make it all y'all's turn

She ended echoing her tweets earlier this week: She thanked the museum for helping her realize her vision, urging fans to "care for your communities," insisting that "inclusion is not enough" and that it's time that historically divided institutions tear "the fucking walls down."

It felt like a rebirth — for the high-art world, which has, perhaps unwittingly, helped propagate white supremacy, and for Solange, whose freedom makes the world feel like a more welcoming, inspired place.