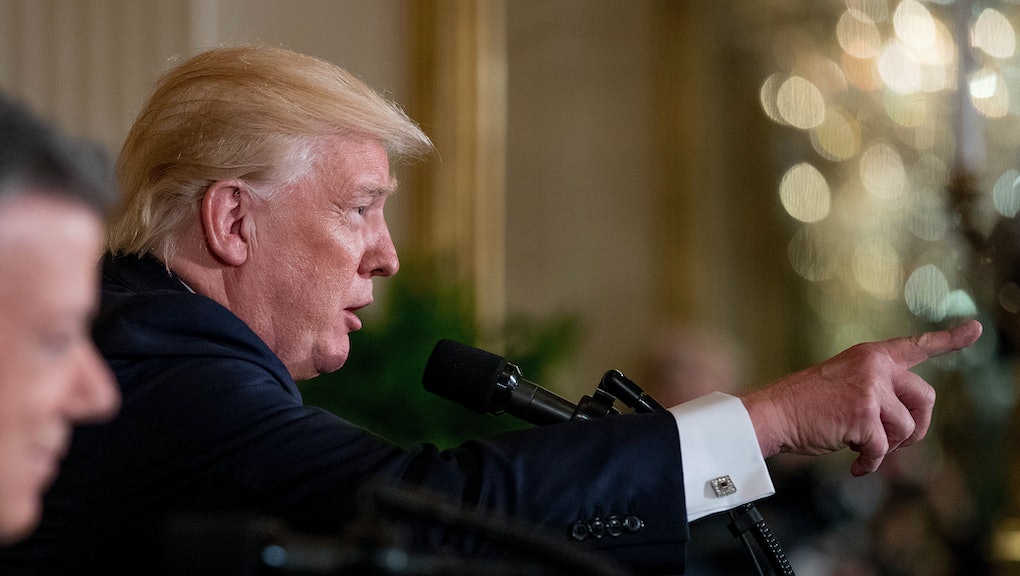 Navigating Trump's America: The two quotes that may come to haunt Donald Trump

"The entire thing has been a witch hunt ... there's no collusion."

The first denial was President Donald Trump's answer to a question Thursday about whether he asked former FBI Director James Comey to stop investigating former national security adviser Michael Flynn. The second denial is Trump's response to the Justice Department's announcement of a special counsel that will examine Russia's role in the 2016 election.

For the rest of 2017, perhaps longer, investigators will try to determine whether those two answers from Trump are true. Trump made those statements at his first news conference in more than a month, standing alongside the president of Colombia.

For now, the special counsel has given Trump and congressional Republicans cover. They can simply refer any questions about the Trump-Russia investigation to the Justice Department inquiry. But in the long term, what investigators reveal could be incredibly damaging for Trump — and contradict one or both of those statements above.

Even in the short term, the Russia headaches will continue for the president. They kept up on Thursday.

The New York Times directly contradicted Trump's denial of asking Comey to stop investigating Flynn, writing that Comey was made uneasy by Trump asking about the inquiry. Associates of the FBI director told the Washington Post he prepared extensively for meetings with Trump and took meticulous notes of their conversations — memos various members of Congress are now seeking.

Deputy Attorney General Rod Rosenstein briefed senators on Thursday. After that meeting, Republicans and Democrats alike said Trump had decided to fire Comey before Rosenstein wrote a memo laying out the reasoning. Sen. Lindsey Graham (R-S.C.) emerged from the meeting saying it was clear to him the Russia inquiry is a "criminal probe."

Vice President Mike Pence is in hot water for contradictory statements about Flynn's ties to Russia. Back in March, when it was first reported Flynn had filed as a foreign agent of Turkey, Pence said it was "the first I heard of it." More than two months later, it was reported that Flynn told Trump's legal counsel he was under investigation for lobbying for Turkey. Despite being head of Trump's transition team, Pence says that information was never relayed to him.

Democrats in Congress say the mood has shifted substantially since the announcement of a special counsel. "It is truly remarkable that it took this long to get here, but we definitely got what we wanted," one Hill staffer told Mic.

This is Mic's daily read on Donald Trump's America. Welcome to the political newsletter that wants you to know yes, this week is almost over.

Trump will introduce his first budget next week. A budget outline released earlier this year promised major cuts across the federal government, with substantial increases to military spending and border security. A few things the 2018 budget would do: require paid family leave programs, make deep cuts to federal aid to college students and slash federal employee pay. Democrats are already saying the proposal would cause a government shutdown. The opposition has a decent hand in these negotiations, as Democrats were able to win major concessions from Trump last month to keep the government open.

Meanwhile, Trump and Republicans killed an Obama-era policy that let states experiment with new ways to help people save for retirement. Many low-wage workers do not have savings, Mic's Andrew Joyce reported, so states like California set up funds to help those workers save. Financial retirement interests, like the U.S. Chamber of Commerce, opposed the measure. Read more from Andrew.

A former Connecticut senator, Joe Lieberman, has gone from a Democratic vice presidential candidate to the potential bane of the party. Running with Al Gore in 2000, Lieberman eventually became an independent and a frequent supporter of Republicans. Now, Lieberman has emerged as Trump's top choice to run the FBI.

Some Republicans are ecstatic. Responding to Democratic criticism, Sen. John McCain (R-Ariz.) said, "Joe Lieberman has more experience than all my Democratic colleagues combined. So screw them." Some Democrats expressed anger over Lieberman's conservative pivot, while others believe no politician should run the FBI, Politico reported.

Trump notified Congress on Thursday he will begin a renegotiation of the North American Free Trade Agreement. Trump triggered a 90-day period to consult on what the U.S. should seek to change in the agreement. Trump repeatedly railed against NAFTA during the presidential campaign and recently threatened to withdraw entirely from the deal. The Congressional Research Service has determined the deal, negotiated in 1994, did little to take jobs from the U.S. or create them.

•  Sweden has dropped the rape investigation into Julian Assange. (Mic)

•  Planned Parenthood may have to close four clinics in Iowa because of funding cuts from lawmakers. (Mic)