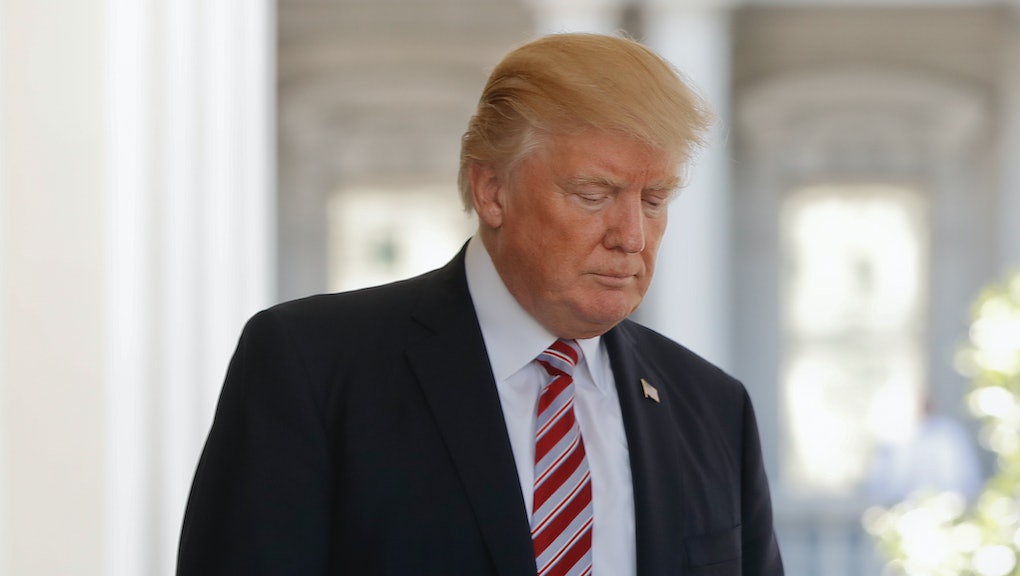 3 takeaways from two wild weeks of scandals for Trump

It wasn't that long ago that President Donald Trump was celebrating an unlikely victory on health care.

Republicans had just squeezed the American Health Care Act through the House, sending the plan to the Senate and delivering a blow to the Affordable Care Act, and Trump was all smiles.

Less than a week later, everything changed.

Since firing former FBI Director James Comey on May 9, few suns have set without some new scandal engulfing Donald Trump. And unlike his controversial campaign, where each new scandal seemed to erase the one before it, this new batch of controversy has only seemed to intensify with each reveal. It's stalled the Republicans' legislative agenda and made the word "impeachment" part of the conversation just over 100 days into Trump's presidency — and it's probably only going to get worse.

So what can we learn from these crazy two weeks of Trump?

Trump is not invincible

In October, about a month before Americans went to the polls, a tape surfaced of Trump talking with Billy Bush in 2005 about how he can sexually assault women because of his celebrity.

Many assumed this was the end for Trump — somehow, they were wrong.

That Trump survived so many scandals during his unlikely bid for the White House — and has continued to do so now that he's there — made it seem like there was perhaps nothing he couldn't recover from.

But axing Comey seems like it could be the Icarus moment for Trump — the moment he flew too close to the sun and melted his wings.

The unending barrage of news stories about Trump's administration in the past two weeks has intensified scrutiny over how Trump made it to the White House and what he's done since getting there — and his competence to serve as commander-in-chief.

But there's still plenty of work to be done

For all the talk of impeachment being thrown around, the possibility remains somewhat distant — despite the winds of chaos blowing around the White House the last couple weeks.

As NPR notes, those who want to impeach Trump will have to get a Republican-controlled Congress to go along with it — and, at least for now, a lot of Republicans seem to be standing by the embattled president.

And though aides are beginning to research impeachment proceedings should the scenario arise, there is still "no firm line from A to B," Aaron Blake wrote in the Washington Post Saturday. The obstruction of justice possibility is there, in other words, but it's not an open-and-shut case at this point — and there's a chance Trump can still find his way out of this, the way he has with so many other scandals.

This isn't going away for Trump

While he's yet to drown in this recent wave of scandals, the past two weeks have been damaging to Trump — and it doesn't look like he'll get any breather from the onslaught of bad news.

The probe into his campaign ties with Russia now has a special counsel in former FBI Director Robert Mueller. He is taking over an investigation, which has broadened to include a current member of the White House and a potential cover-up. It's an investigation, lawmakers were told Wednesday, that is entering a more "active" phase, the Post reported. Its pace is expected to accelerate, and parts of it, like subpoenas and interviews, will be observable by the public eye.

Meanwhile, a new bombshell seems to drop every day, forcing the White House into a constant state of damage control.

All this combined has begun to chip away at Trump's support among his party, strained the patience of his supporters in D.C. and even led to speculation from Republicans that the president may be on his way out.

"At this point, it's hard to see how things could progress in a way that's less favorable for the Trump administration," Philip Bump wrote in the Post Friday. "Of course, it's seemed that way for most of the past two weeks."