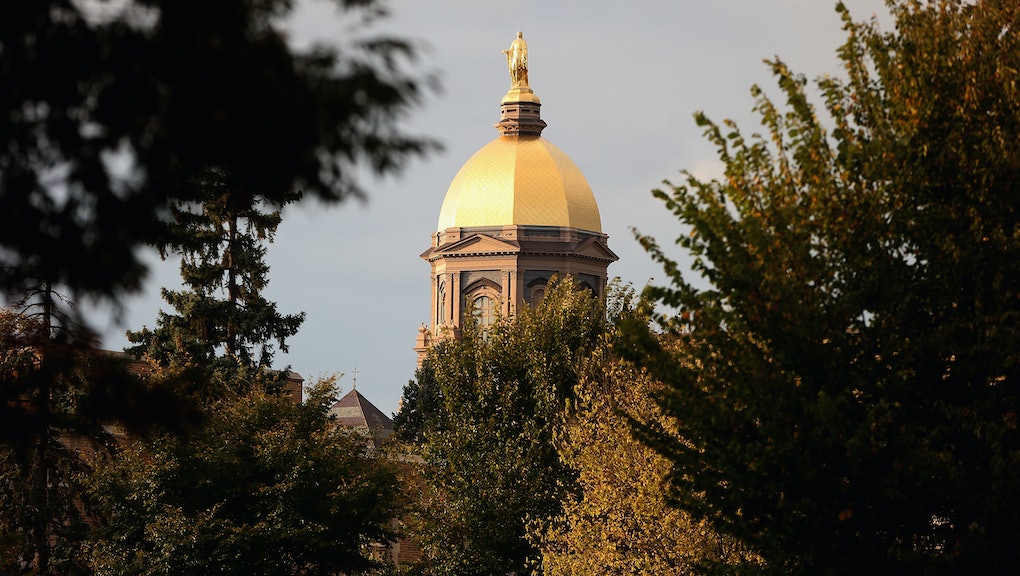 On Sunday, Vice President Mike Pence will take the stage at Notre Dame University's commencement to address the recent graduates — but some of the university's students are making it clear he won't have their support.

Student activist group We Stand For is organizing a protest against Pence during Sunday's commencement exercises, in which participants will walk out of the ceremony when Pence begins speaking to stand in solidarity with those affected by his damaging policies.

"For us, there's nothing that could be more in the spirit of the university and the university mission than to stand up for human dignity and the most vulnerable among us," We Stand For organizer Luis Miranda said in an interview.

In addition to students, a Facebook event for the protest encourages all attendees, including faculty and students' families, to participate in the protest.

"During his time as governor of the state of Indiana and now as a vice president, Pence has targeted the civil rights protections of members of LBGT+ community, rejected the Syrian refugee resettlement program, supported an unconstitutional ban of religious minorities, and fought against sanctuary cities," We Stand For said in a statement, as quoted by ThinkProgress. "All of these policies have marginalized our vulnerable sisters and brothers for their religion, skin color, or sexual orientation."

As part of the commencement ceremony, Pence will also be conferred with an honorary degree, the Notre Dame website notes. He will be the first vice president to deliver the commencement address at the university, which is located in Pence's home state of Indiana.

Miranda made it clear that Sunday's protest is not directed against Pence as a human being, explaining, "He is our brother, he is a child of God, and we will respect his human dignity," he said.

Rather, the protest is in opposition to the vice president's policies, which, Miranda notes, "target the lived experiences and the realities of our classmates, our friends, our families." These policies, Miranda explains, also go "completely against" Notre Dame's practice of Catholic social teaching, which emphasizes human dignity and caring for the most vulnerable members of society.

In addition to "standing up" for those who feel targeted by Pence's policies, Miranda said he hopes the walkout will "spread an even larger message to the Notre Dame community: Why are we ok with this?"

"We really need to think about who are we as a Notre Dame community?" Miranda emphasized. "What our are values? And is inviting Mike Pence representative of [those values]?"

To Miranda and We Stand For, the answer to that question is clear.

"This is our commencement. This is a very special and sacred moment, the culmination of all our hard work and effort," Miranda said. "And to have somebody who has been working actively against our humanity, for being who we are, to be speaking to our class, addressing our class, and being conferred with a degree is just unacceptable."