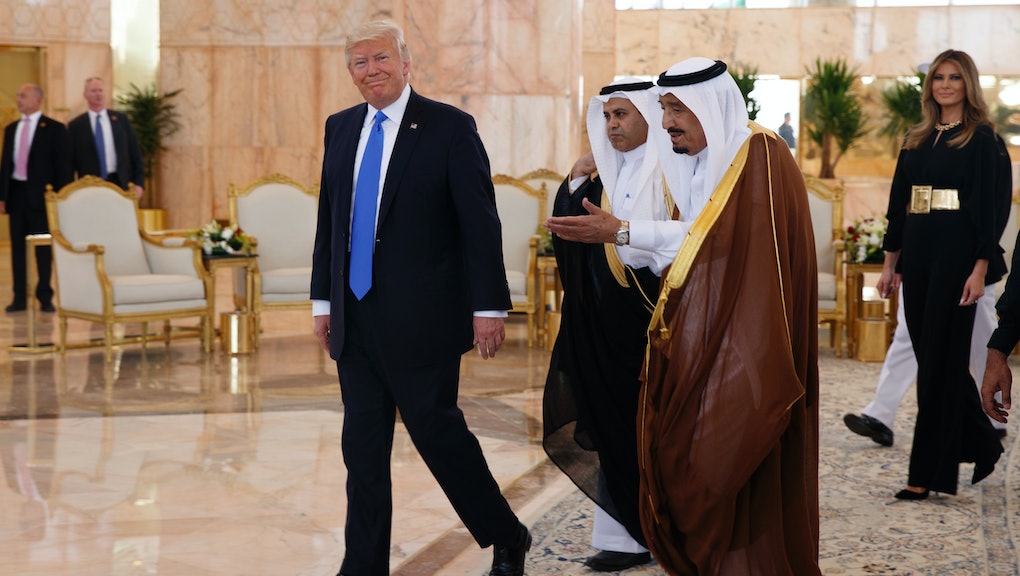 President Donald Trump started the first leg of his sprawling foreign tour on Saturday, arriving in Saudi Arabia to a warm welcome on a trip which will include stops in Jerusalem, the Vatican and Brussels.

The trip was "intended to be a blunt rejection of President Barack Obama's vision for the region," according to the New York Times. The president's pivot was on full display as he pledged even more U.S. military support for Saudi Arabia and key advisers like Secretary of State Rex Tillerson pledged a hardline stance on Iran, even as the latter country re-elected moderate and nuclear-deal negotiator President Hassan Rouhani.

Here's what you need to know about the president's big day.

Trump is giving the Saudi government over $100 billion in weaponry

Trump signed a nearly $110 billion arms deal with the Saudi government during the trip, significantly bolstering the U.S.-Saudi military alliance and selling the monarchic state equipment, including tanks, jets, naval warships and a sophisticated missile-defense system named THAAD — the same system the U.S. is using to defend against possible North Korean nuclear strikes on the Korean Peninsula.

According to CNN, the deal was spearheaded by Trump's senior aide and son-in-law, Jared Kushner, who "shocked a high-level Saudi delegation earlier this month when he personally called Lockheed Martin CEO Marillyn Hewson and asked if she would cut the price" of THAAD. The deal was accompanied by other agreements that could bring total U.S. investment to some $350 billion, according to Reuters, as well as additional private investments, which could total up to $200 billion.

Trump's decision to shore up the U.S.-Saudi alliance is questionable

The arms deal is not likely to go over well with critics of either Trump or Saudi Arabia, for good reason: As Human Rights Watch noted in its 2016 report, the kingdom is an absolute monarchy where citizens have few rights, women are repressed by force and brutal suppression of dissent is the norm not an exception. Saudi Arabia has relentlessly bombed Houthi rebels in Yemen, killing at least 10,000 civilians by U.N. estimates and imposed a blockade that has threatened the well-being of millions of others.

But the alliance makes sense for reasons unconnected to human rights: Saudi Arabia is a leader in the regional military coalition against terrorism, a top U.S. concern, and plummeting oil prices have left the nation in need of powerful allies who can help with its growing budget deficit and need to diversify the economy.

Morality aside, Reuters noted, Trump enjoyed a noticeably warmer reception from the Saudi government than his predecessor Barack Obama, who took a less hawkish approach in Iran and Syria.

The visit wasn't without its faux pas

At least a few mildly embarrassing incidents caused some domestic embarrassment for Trump. At one point, the president flashed his now-famous thumbs up while next to King Salman, which caused some mild concern. He appeared unaware the U.S. embassy in Riyadh, Saudi Arabia, says the gesture is considered rude there; however, according to BuzzFeed, the advice is outdated.

Trump also bowed when presented with a medal, something he repeatedly criticized Obama for doing when visiting with King Abdullah in 2009 — though social media users mocked Trump's awkward motion, saying it was more of a curtsy.

But all in all, Trump handled himself with notably more restraint than some of his interactions with other world leaders. On Sunday, he'll give a speech on terrorism and Islam — which just so happens to be written by Stephen Miller, one of the senior White House aides behind Trump's de facto Muslim ban — when the public might get a chance to see the sparks really fly.