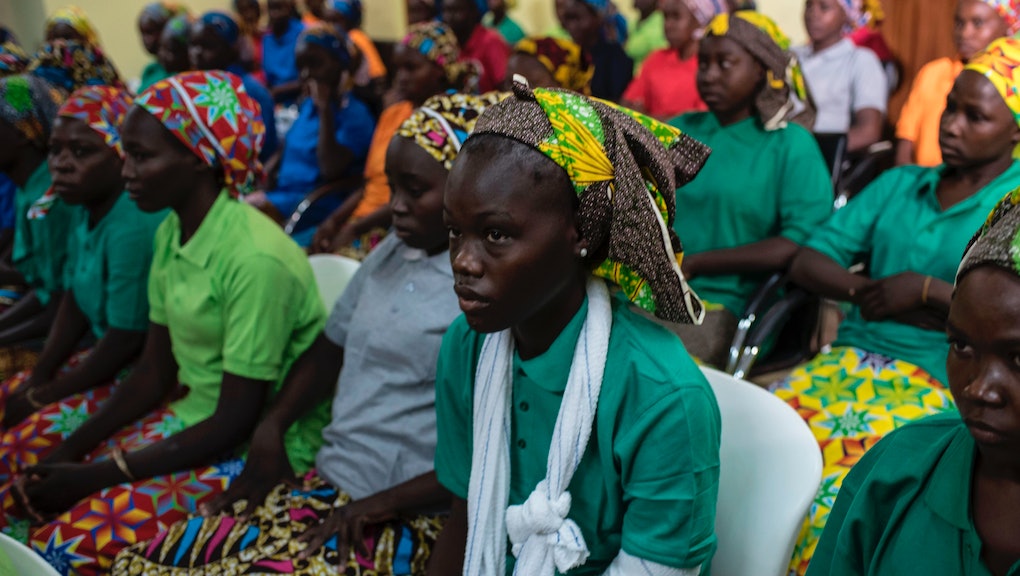 After release by Boko Haram, 82 Chibok girls reunited with their families

The Chibok girls Boko Haram kidnapped and recently released have been reunited with their families, according to CNN.

The 82 young women are among the 276 whom members of the militant Islamic group took from a boarding school in the Nigerian town of Chibok over three years ago. Following their release in early May, the girls have been transported to Nigeria's capital city of Abuja, where they rejoined their relatives in a celebratory ceremony on Saturday, CNN reported.

"Today I thank God, my daughter is alive," Yahi Bulata — the father of one of the abducted girls, who is now 21 years old — told NPR.

In April 2014, Boko Haram forced the schoolgirls out of bed in the middle of the night, sparking international backlash and the Bring Back Our Girls campaign, which drew the support of former first lady Michelle Obama. The girls' release came in exchange for five of Boko Haram's commanders, a deal Switzerland, the International Committee of the Red Cross and various NGOs helped Nigeria facilitate. According to the New York Times, the Nigerian government plans to keep up negotiating until militants return the 113 girls still missing.

In October, Boko Haram returned 21 of the girls to the government, according to CNN. Right after their kidnapping in 2014, 57 girls managed to escape, and another was found in May 2016. In December, a Nigerian army commander told Al Jazeera that the government had "rescued over 1,900 Nigerian citizens" from Boko Haram, a fundamentalist group that has existed since the 1990s and formally pledged allegiance to the Islamic State in 2015.

The girls are currently receiving medical attention at a rehabilitation center in Abuja and will eventually return to school. Community leader Yakubu Nkek told the Times that confidence in Nigeria's ability to rescue the rest of the girls remains high.

"We have trust in this government — definitely they will rescue the rest safely and back to us alive," Nkek said.