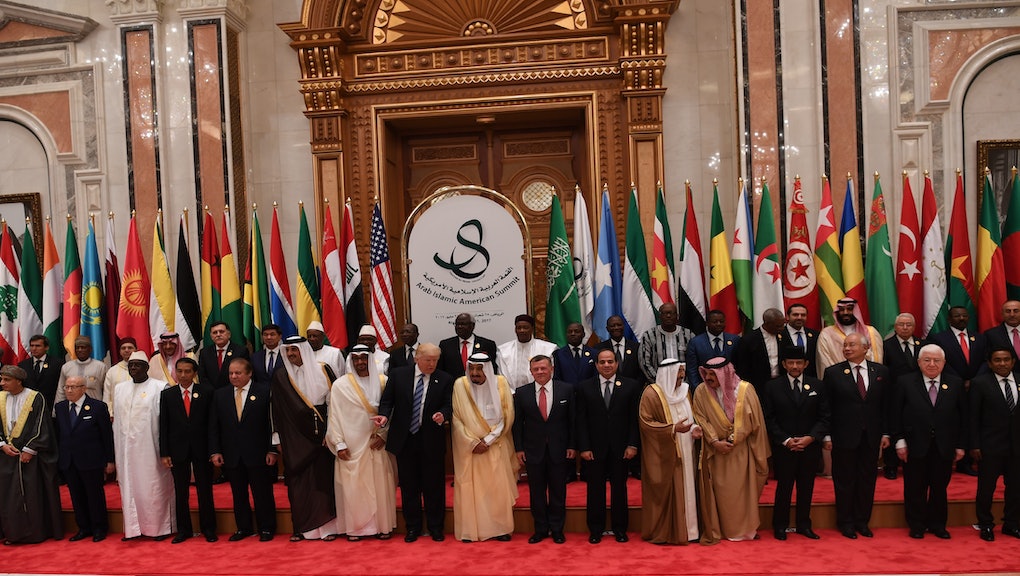 President Donald Trump's Sunday speech at the Arab Islamic American Summit in Riyadh, Saudi Arabia, was supposed to be a barn-burner.

Supposedly authored by Stephen Miller, one of the architects of Trump's travel ban on individuals from several Muslim-majority countries, the speech was on terrorism in the Islamic world — a topic on which the president is particularly bellicose. But the president delivered a toned-down call for unity intended to reset his image in the Muslim world and didn't even say the words "radical Islamic terrorism," a phrase he relentlessly campaigned on.

Trump's more moderate tone seems to have garnered a muted reaction from the alt-right, the loosely organized and mostly digital network of white nationalists, far-right reactionaries and trolls which exalted in the president's rise to office.

"We are not here to lecture — we are not here to tell other people how to live, what to do, who to be, or how to worship," Trump told leaders from more than 50 Muslim-majority nations. "Instead, we are here to offer partnership — based on shared interests and values — to pursue a better future for us all."

On message board 8chan's /pol/ subforum, one of the explicitly fascist hubs of the alt-right, users mostly skipped over the speech entirely to argue whether Trump's $110 billion arms deal with the Saudi Arabian government was a sellout to extremists or a ploy to fuel instability in the region.

"He's now sealed an arms deal with the fuckers who've been cooperating with Israel and Turkey to topple Assad for the benefit of Israel," one user wrote. "6,000,000D chess right?"

Paul Ray Ramsey, the racist vlogger who uses the moniker "RamZPaul," was similarly angry Trump was selling arms to the Saudi government.

"9/11 was caused by Saudis," Ramsey tweeted. "ISIS is funded by the Saudis. Yet we scream for war with a country that leaves us alone. Curious."

Geert Wilders, the Dutch politician and prominent Islamophobe, lamented the change in tone was evidence Trump did not realize Islam is "evil" and "barbaric and violent by nature."

But elsewhere, Trump found a friendly — if not exactly thrilled — audience among parts of his fanbase.

Some parts of the pro-Trump media fought back against notion the president had toned down his rhetoric on Islam, with far-right site Breitbart shifting the goal posts to arguing "Trump, unlike Obama, addressed 'Islamic terror' directly" in its front-page headline. Though the site's coverage of the speech was typically positive, the site spent most of its time contrasting Trump's speech with a 2009 address by Barack Obama.

On /r/The_Donald, Reddit's pro-Trump board, users were notably more enthusiastic, though some worried the speech would be drowned out in the larger media.

"The President spoke in the center of the Islamic world and ended his speech with god bless American," one user wrote. "Legend."

Another added, "The message was cristal clear, from now on America's allies are expected to fight against Jihad."