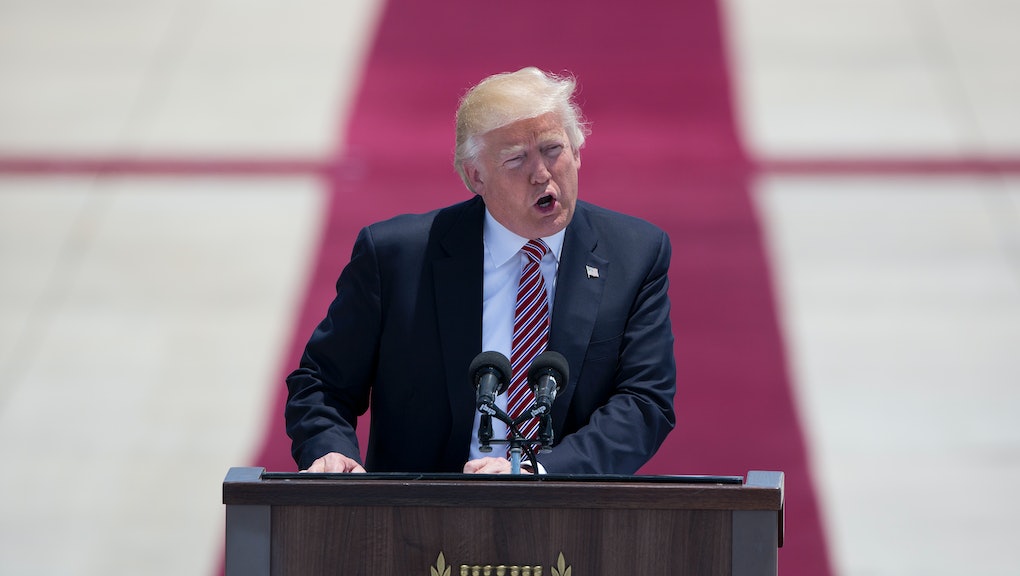 Trump, in Israel, says there's a 'rare opportunity' for peace in the Middle East

President Donald Trump touted his ambitions for peace in the Middle East on Monday during a stopover in Israel on his first foreign trip as president.

"We have a rare opportunity to bring stability and peace in this region, defeat terror and create a future of peace," Trump said during remarks that were delivered on an airport tarmac shortly after he landed. "We can only get there by working together – there is no other way."

The comments followed speeches from Israeli President Reuven Rivlin and Prime Minister Benjamin Netanyahu, who said that the peace Israel seeks is "durable, in which the Jewish state is recognized, security remains in Israel's hands and conflict ends once and for all."

Later on Monday, Trump doubled down on the comments during a press conference with Rivlin.

"There's a great feeling for peace throughout the Middle East," he said. "I think people have just had enough of the bloodshed and the killing, and I think you're going to start to see things starting to happen."

Although Trump's aides have attempted to downplay the prominence of peace talks in the Middle East as an agenda item during Trump's visit, Trump has frequently broached the topic over the course of his young presidency.

During a visit Palestinian Authority President Mahmoud Abbas paid to the White House in March, Trump called achieving peace something that is, "frankly, maybe not as difficult as people have thought over the years."

"But we need two willing parties," he said at the time. "We believe Israel is willing. We believe you're willing. And if you both are willing, we're going to make a deal."