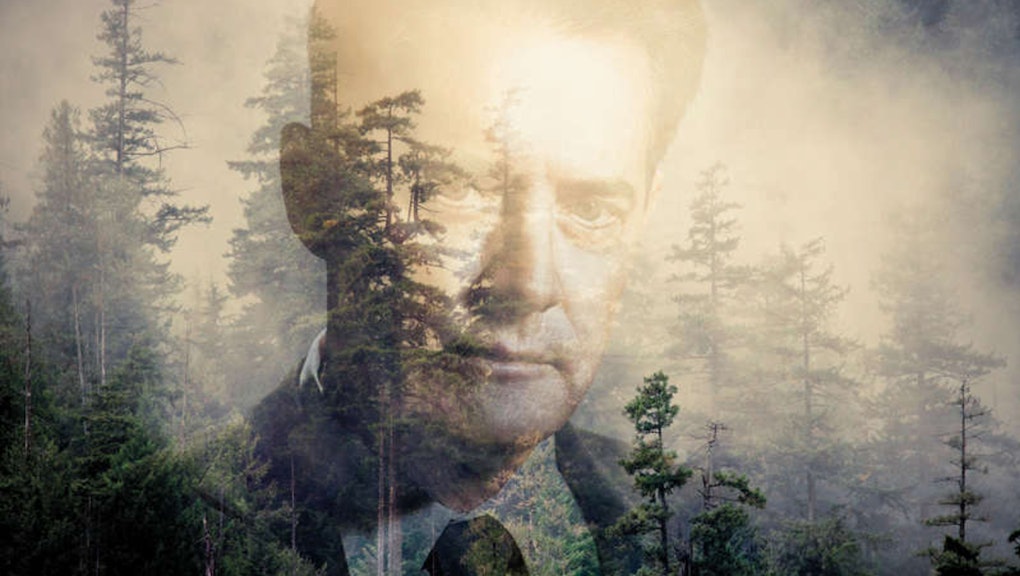 "It's happening again." The slogan for the weird and mysterious revival of the Twin Peaks, is the perfect summation of the beginning of the new installment. The major difference, however, is what's happening seems to have grown exponentially larger than one murder in a small town.

Unlike the original series, Twin Peaks: The Return does not seem to be as focused on Twin Peaks, Washington. While that might have been initially irksome to avid fans, it makes sense considering why it took so long for the reboot to actualize — the idea's grown much larger in size and scope.

That said, there are plenty of nostalgic throwbacks that no doubt appeased fans, starting with a scene set in the infamous Black Lodge.

There, we see Agent Cooper, who appears to have been trapped inside since 1991, aka the end of season two. Set in black and white, Cooper talks with The Giant, who tells him "you are far away." Perhaps he's speaking about Cooper's evil doppelgänger, who took his place in the real world 26 years ago?

Like many things that happen in the Black Lodge, that question is inscrutable, as are most things that occurred in parts one and two of The Return. Here's the gist of what happened, and four questions audiences were left with.

1. What in the world is evil Cooper doing?

That Cooper, who is referred to as "Mr. C," seems to have been up to a lot of no good since he was last seen smashing his face into a bathroom mirror. He kills three people (that we know of) in this first installment, while wearing a snakeskin leather jacket, and a face that looks like it's been out in a storm for decades.

There was certainly a darkness inside the original Dale Cooper, but there was also a natural compulsion to do good that balanced him. Mr. C is all the darkness without a hint of the light. His eyes look lifeless, like a shark right before he sinks his teeth into a victim. As such, his purpose in this world appears singular — to cause as much destruction as possible.

Amidst all the killing, Mr. C hacks into the FBI mainframe, which probably wasn't too hard considering his doppelgänger was an FBI agent, and accesses a bunch of blueprints and information. While this seems legitimately dangerous for the world, he receives a mysterious phone call in which he's warned that he must return to the Black Lodge the next day. How a voice is going to make this force to be reckoned with return to his prison, however, remains to be seen.

2. Why does the glass box in New York City exist?

This is perhaps the most interesting and perplexing aspect of this new season. There is a giant glass box, with a hole to another glass box, on the outside of a windowless skyscraper in New York City. One as-of-yet-unnamed man, played by Ben Rosenfield, guards it, and changes out the film on several cameras pointed at it. When Tracy, played by Madeline Zima, brings him coffee and asks to come inside, it becomes clear that the box is some sort of harbinger, bringing beings into this world from another — both good and bad.

The bad comes in the form of a strange monster-type being that seems to consume the young man and woman who end up having sex in front of it — a big no no for anyone in a horror film-type setup. The good is Agent Cooper, who manages to break out of the Black Lodge, at least momentarily, and end up in the box right before the evil creature comes through. While he doesn't appear to break into the real world at this moment, it certainly suggests he might at some point.

3. Who is Bill Hastings?

The Laura Palmer-esque murder that occurs in these first two parts of The Return is that of Ruth Davenport, a librarian from Buckhorn, South Dakota. She's found — or rather her head is found — with an unknown male body underneath. The fingerprints of local school principal Bill Hastings, played by Matthew Lillard, are all over the apartment.

While it initially seems like he's been framed by his wife, and that the murder of Ruth was carried out by mayhem creator Mr. C, his confession strikes a Leland Palmer chord. It's possible Hastings is possessed by a BOB-like creature from the Black Lodge.

4. What is missing that Deputy Hawk needs to find?

Catherine E. Coulson, who played the Log Lady, may have passed away in 2015, but she managed to give one final, mysterious message in the opening of this new series. She tells Deputy Hawk that "something is missing and you need to find it." That "it" involves Agent Cooper. So Deputy Hawk heads out into Ghostwood Forest to try and find what's missing, which frankly may just be Agent Cooper himself.

The Log Lady also says this haunting phrase: "watch carefully." It ties in nicely ties with the young man charged with watching the glass box in New York City. Obviously everything between the two worlds is connected, although the how, of course, continues to be shrouded in mystery.

There were many other questions raised throughout parts one and two of this ground-shaking — literally — new season. Where was Lucy and Deputy Andy's son they kept talking about? What happened to Shelly and Bobby's relationship? What did Laura Palmer mean when she said "I am dead, yet I live"? And where did that electrified tree with a pulsating brain on the top that claims it's "the arm" come from?

Hopefully some of these questions will be answered as the season continues to roll out at an agonizingly slow pace typical of David Lynch.