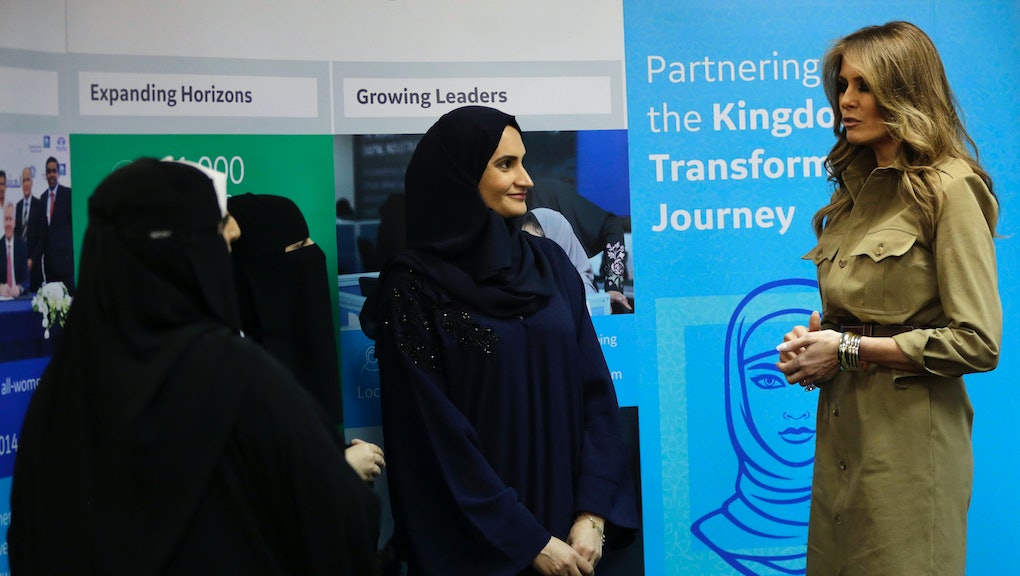 As part of the first family's trip to Saudi Arabia, Melania Trump visited a General Electric service center in Riyadh. While there, she took a moment to praise its female employees as evidence of progress toward "the empowerment of women."

"Had the honor of visiting first all-women process service center in #Riyadh, #SaudiArabia," Trump tweeted, along with a photo of her shaking hands with a woman who presumably works for GE. "Thanks to @GE_Saudi for the invite!"

"Enjoyed talking to the incredible women working hard @GE_Saudi service center," another of Trump's tweets read. "Great strides being made towards the empowerment of women."

This is of course ironic considering that Saudi Arabia is notorious for gender discrimination. Women's rights are in dire straits in Saudi Arabia: Male guardians must grant women permission to travel outside the home, work, marry and, sometimes, receive health care. Saudi women are forbidden from driving cars and, when they leave the house, must typically don full-coverage garments.

The GE service center Trump visited over the weekend is indeed entirely female-run, but the absence of men and women working side by side is emblematic of the ways Saudi Arabia remains deeply gender segregated. As Reuters reported, that's begun to change somewhat in recent years, but progress is slow.

The first lady wasn't the only Trump to tout the importance of "women's empowerment" during the visit to Saudi Arabia, which also saw GE sign a $15 billion deal with the country. On Sunday, first daughter Ivanka Trump attended a roundtable where she spoke with Saudi Arabian women leaders about expanding female entrepreneurship.

"Saudi Arabia's progress, especially in recent years, is very encouraging but there's still a lot of work to be done and freedoms and opportunities to continue to fight for," Ivanka said at the event, raising the eyebrows of some women's rights activists. Loujain al-Hathloul, who was once arrested for driving a car in protest of the country's repressive laws, told the Washington Post that the experiences of privileged women don't represent change for Saudi Arabia's larger female population.

"My issue with these events," al-Hathloul said, "is that they show these women as powerful and making an impact, making a change. But in real life, they've been given these opportunities by the men. They did not fight for them."