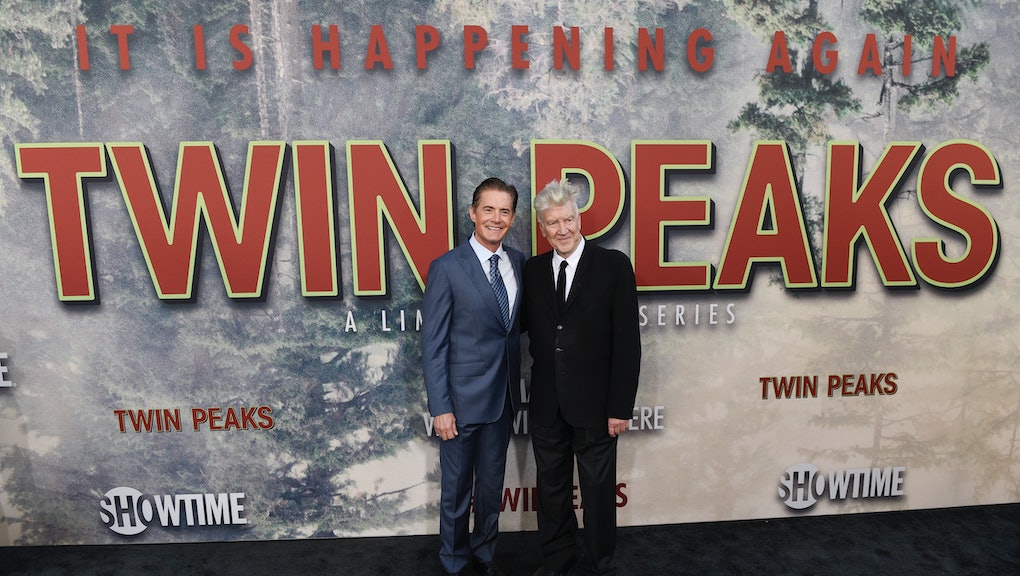 6 differences between the Black Lodge in the original 'Twin Peaks' vs. 'The Return'

The Black Lodge, which was shrouded in so much mystery during the first two seasons of Twin Peaks, seems to take center stage in the revival. Audiences are greeted by the dream-like space at the very beginning, and reminded of a promise Laura Palmer made over 26 years ago: "I'll see you again in 25 years."

While she wasn't exactly punctual — certain elements were obviously out of the fictitious character's control — she did eventually keep her word.

Laura and Agent Cooper, now 26 years older, have a very similar interaction to the one they had in season two of Twin Peaks where she kissed him and whispered a secret into his ear. This time, she also tells him this simple-sounding riddle: "I am dead, yet I live." It suggests this world of the Black Lodge is more than just a holding place for evil spirits.

This is just one of several revelations that developed in the Black Lodge during parts one and two of the revival season. It suggests audiences only saw the tip of the iceberg in the original series, and are in for a lot more strangeness in this already strange, limbo-like world.

Here are six ways the Black Lodge is already a vastly different place than it was 26 years ago.

1. There's no Man from Another Place

This may have had more to do with the falling out between Michael J. Anderson and David Lynch than anything else, but still, not having the Man from Another Place to host the Black Lodge is a decided change. Instead, it appears Lynch has decided to go in the opposite tonal direction with the more benevolent Giant as host, which does seem to make sense considering the good Dale Cooper is currently trapped there.

2. The One-Armed Man is a regular

At least Cooper's not totally without buddies while he's trapped in this mind puzzle of another world. The One-Armed Man, also known as Phillip Michael Gerard, is occasionally there with him. Gerard is sometimes inhabited by MIKE, the benevolent counterpart to the evil spirit BOB. It's unclear how he wound up there, but with BOB out and about, it suggests MIKE has become the designated spirit of this mystical world. He asks confounding questions like: "Is it future, or is it past?" He also introduces Cooper to a very strange creature — something that has been referred to as "the evolution of the arm." More on that in a moment.

3. There's this electrified tree thing that can talk in there

It's as weird as it sounds. Phillip Michael Gerard introduces the electrified tree to Cooper as "the evolution of the arm," so it's tempting to say this is what became of his arm after it was separated from his body. The tree appears to have electric currents running through it, and a pulsating brain-like thing perched on top that becomes animated when it talks. As is to be expected from such a bizarre being, it only speaks in cryptic messages like "253 time and time again," and "Bob, bob bob." Oh, and it also has an evil version of itself that eventually pushes Cooper out of the Black Lodge through some sort of wormhole into the real world. Welcome back to non-reality, Twin Peakers!

Or at least someone from inside seems to be able to. After the evil version of Cooper, who made it out of the Black Lodge instead of the real Cooper at the end of season two, kills his henchman/girlfriend Darya, he receives a phone call from the Black Lodge telling him he's going back in tomorrow. Perhaps it's MIKE literally calling his evil counterpart home? More information from future episodes will be needed to parse this one out.

5. It's possible to break out of the Black Lodge

At the end of season two it was revealed that fear can open the gateway to the Black Lodge and love can rescue people from it. This new season reveals someone can actually be pushed out of it under certain circumstances, aka a confrontation with the evil version of the tree-brain monster. At least that's what happens to Cooper when he meets the monster, and is subsequently thrown down a time-space continuum wormhole that lands him in a glass box at the top of a tall New York City building.

6. The ground can literally shake

The iconic white and black floors of the Black Lodge are still very present in the revival, but apparently they can do much more than make audiences super dizzy. In a climactic moment, the ground literally shakes, so much so that the stripes become disconnected and jiggle about as if part of a carnival ride — which was no doubt more scary than fun for Agent Cooper. It, however, further proves that things are truly not what they seem there, and any structure that existed previously can be uprooted.