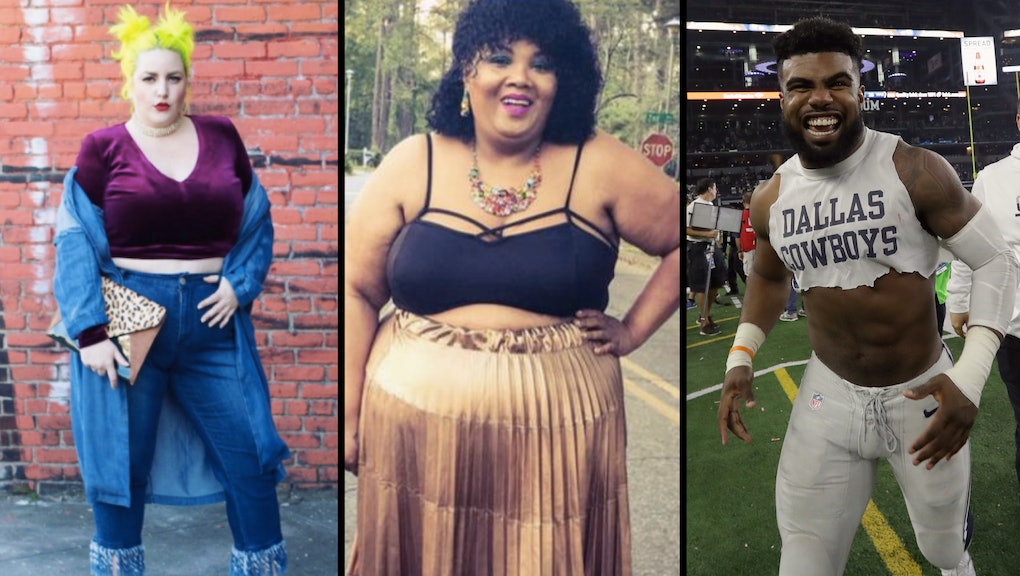 Like leggings and short shorts and oh yes even rompers, crop tops are one of those clothing items that cause people to not just have a strong opinion about the garment itself, but also about the people who wear them.

It's one of those garments that turn just about everybody into the fashion police, often with the mindset that it's reserved for only a certain kind of person. In this case, people think crop tops are only for someone who identifies as female and is svelte, because the real intention of someone who chooses to wear a crop top is showing off a sliver of toned abs, right?

The real intention of the person wearing a crop top is wanting to wear a short shirt, and show off whatever stomach they're rocking, no matter their size or gender or shape or anything. Crop tops are really for everyone, so that's why we are announcing that summer 2017 should be the year of the crop top — for everyone.

Let us show you some examples of how this can work — and let's start with the people who don't identify as women.

There's a myth that these kinds of people should not wear crop tops, and we're here to prove that completely wrong, first by showing you these pictures of Ezekiel Elliott at the NFL Draft in April 2016.

This is amazing for a number of reasons. For one, he's wearing a purple suit. For two, he's rocking a crop top better than anyone we've seen in a long time. Of course, he made plenty of headlines for doing this on a red carpet.

"I wanted to be a little different than everyone else," Elliott told the Dallas Morning News. "I'm known as the hero in the half-shirt, so I had to go out on the red carpet with a crop top."

But by wearing this, he not only sparked a million tweets, but also paid homage to the crop top-loving men before him, from Prince and Will Smith to just recently, Jaden Smith, Zac Efron and Kid Cudi, who wore one spectacularly at Coachella 2014.

And if you think this was a one-time thing for Elliott, think again. At several games as a player for the Dallas Cowboys, he rocked it.

And it's not just celebrities doing this either.

You know what we see when we look at all these pictures? We see a group of people who have every right to wear a crop top, look good doing it and just so happen to identify as something other than women. That's it! That's what we see! Crop tops, after all, have no assigned gender.

Moving on, let's talk about another myth: Crop tops are only to be worn by very thin people who have rock-hard stomach worthy of flaunting.

Obviously, this is false, and here are a series of photos that show you that.

Need further assurance? In April 2016, Maui Bigelow who runs the blog Phat Girl Fresh wrote a post for the Curvy Fashionista about how she reacted when a stranger told her she shouldn't be showing off her stomach.

"I am just fixing your clothes because you know we can't be showing our belly," the stranger said, according to Bigelow, to which she responded, "Maybe you can't show your belly, but I can show mine."

"At a size 24, with quite a few rolls and jiggly parts — I can honestly say I wear what I want," Bigelow said in a previous interview with Mic. "This is my body and I love every inch of it... We are fabulous, beautiful and capable of doing and being whatever we desire, right now at the size that we are."

If you're still struggling to rock a crop top at the size you're at, let Bigelow's words ring through your head.

With summer on its way, we urge you to consider destroying this archaic idea that the crop top can only look good on a certain kind of person, because as long as people like Elliott, Jaden Smith and Bigelow exist, that's bullshit.