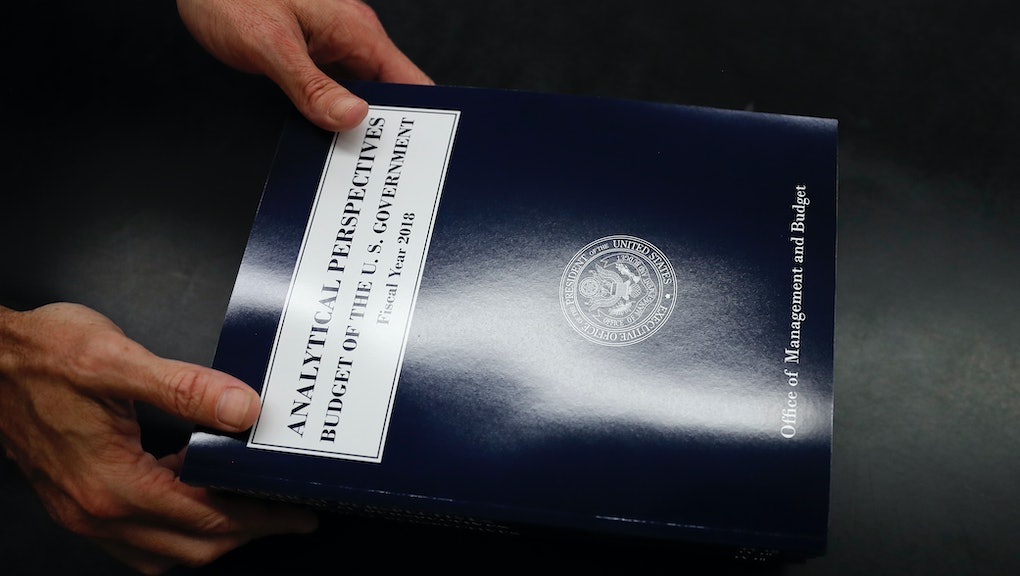 What's the price of doing what you love? For Alexandra Katz, it's nearly a quarter million dollars.

The soon-to-be graduate of the University of California, Berkeley, has spent three years at the 12th-ranked law school in the U.S. working toward her dream of becoming a public defender; she took a semester off of school to work in a public defenders' office in New York City. Other universities offered free tuition, Katz said, but the lure of Berkeley's public-interest law program was too strong — even with the $83,000 annual price tag.

So Katz made a calculation when she chose a law school: Pick the best one — and leave the mountain of student loan debt to the federal government's Public Service Loan Forgiveness program.

The program promised public servants their federal loans would be forgiven after 10 years of consistent repayment. Since the program began under President George W. Bush in 2007, people who took up jobs including teaching, working as doctors in rural communities, providing legal aid and working for nonprofits could enroll to have their loans forgiven.

That program now faces an existential threat: President Donald Trump. The president's first budget, unveiled Tuesday, would end loan forgiveness in exchange for public service. That would save $859 million — about 7% of what the federal government spends in one day. Without a change to the program, the first loans would be forgiven in October.

The budget proposal is unclear on how the more than half a million people currently enrolled in the program will be affected. And people studying to enter fields eligible for forgiveness might never have the chance to enroll.

Because of the rocky path Trump's budget is likely to face in Congress — the number-two Republican in the Senate said Monday it's "dead on arrival" — the current and future enrollees in the debt forgiveness program may never be impacted by Trump's proposal. But for the moment, the potential cuts are causing trepidation among those weighted down with student debt and seeking public service careers.

Over 550,000 Americans have joined the forgiveness program, with tens of thousands signing on each quarter. That's a fraction of the people that could be in the program; by some estimates, about 5 million people are eligible for forgiveness but have not enrolled. Other estimates are even larger.

"My entire life is planned around this program — and that's not unique to me," Katz, 27, said. "This is everything to us."

The Veterans Benefits Administration attracts doctors with the promise of loan forgiveness in exchange for a lower salary. Teachers teach in public schools to reduce their long-term debt. Attorneys counsel immigrants while accepting a fraction of a private sector salary.

It goes beyond these fields. Social workers, Peace Corps volunteers, museum curators — any Americans who work for 501(c)3 nonprofits or government currently qualify for loan forgiveness.

Trump's proposal comes as the government's federal student loan programs are already under scrutiny — especially the debt forgiveness program Trump is targeting for elimination. The Department of Education is currently facing a lawsuit over the program

What's more, there is massive waste in student loan administration — but not because of the debt forgiveness program. The government pays about $38 dollars to debt collection agencies for every dollar collected.

Advocates for teachers, lawyers and doctors said loan forgiveness makes it feasible for professionals to work with minority, low-income or disadvantaged communities in the U.S.

Even with loan forgiveness programs, America faces a projected shortage of at least 40,000 doctors by 2030, according to the Association of American Medical Colleges.

The shortcoming will mean surgeons, specialists and family practitioners won't be giving the necessary care to countless patients, particularly in rural, minority and low-income America, said Matthew Shick, the director of government relations at AAMC.

For doctors, loan forgiveness kicks in for working at a nonprofit hospital or with disadvantaged patients. If the forgiveness ends, those patients will be "hit first and hardest," Shick said.

There are more than 3 million teachers in America's public schools. Unlike doctors, teaching does not require hundreds of thousands of dollars in graduate school loans to begin working. But with a four-year degree leaving the average college graduate $37,000 in debt, forgiveness is still key to attracting the best talent.

If the broader public service program were eliminated, teachers not working at low-income schools would lose their best chance at loan forgiveness. The program currently covers practically every full-time teacher in the country.

The American Federation of Teachers, a union, believes cutting the program would be devastating for recruiting teachers.

"Ending the Public Service Loan Forgiveness program ... is unconscionable," Randi Weingarten, the president of AFT, said in a statement. "This program is an equalizer in an era of skyrocketing college costs and a tool to fight for improved public services — it corrects for budget cuts, lagging salaries and underinvestment in the public service workforce, increasing teacher diversity."

The ABA sued the Education Department in December for retroactively rejecting employees of the Association that were told they qualified for loan forgiveness.

"These dedicated public servants have followed the rules set forth by the government and are now having the rug pulled out from under them," ABA president Linda Klein said in a statement. "It's unfair and unfathomable."

Katz plans to head back to New York in December for a job at Bronx Defenders, a nonprofit that provides criminal defense, legal services and social support to minority and low-income New Yorkers. She said she'll be paid $60,000 a year — a third of what some of her friends will make in the private sector.

"We live in a society where we pay for things, like roads and schools," Katz said, calling teachers, doctors, lawyers and others doing public service a "public good."

"Without these people, things would collapse," she added. "We wouldn't be upholding people's rights."

"What kind of society do we value?" she asked. Read the president's budget.