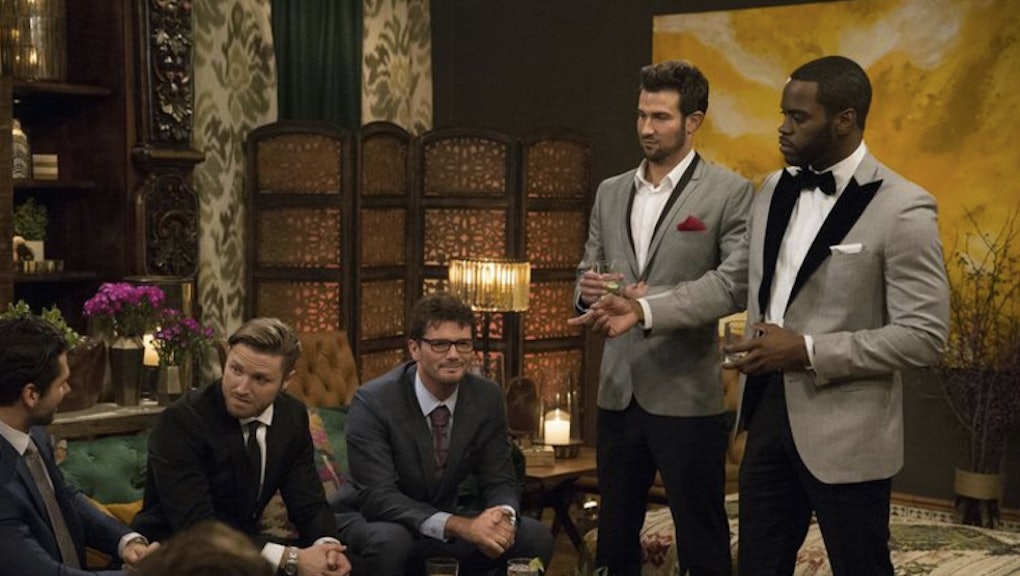 Sparks were flying between Bachelorette star Rachel Lindsay and season 13 contestant Bryan Abasolo from the moment he exited the limo. And the chemistry continued into the premiere episode, because Bryan landed the coveted first-impression rose.

How did he get there? Let's take it back to the beginning.

Bryan was one of the first suitors to exit the limo, and he greeted Rachel by complimenting her in Spanish. She understood part of what he said, which he said earned her "brownie points."

"Have you ever dated a Colombian guy before?" he asked her. Rachel said she never did, so Bryan issued her a warning: "Oh girl, you in trouble."

"But its all good trouble," Bryan added after she laughed. "I look forward to getting to know you better."

"And I look forward to getting in trouble," she fired back.

Now THAT is how you make a good first impression.

They continued to make a connection when Bryan got a chance to pull her aside for some one-on-one time. It's there that he opened up to her about being a 37-year-old chiropractic physician — and being good with his hands. And he wasn't joking. He pulled her in and landed the first kiss of the season.

"He just took it upon himself to take me in his arms and kiss me, and I was not ready for it," Rachel told the cameras. "[I] did not want to kiss anybody tonight."

But that doesn't mean she didn't enjoy it. In fact, she later tells him it was part of the reason she gave him the first-impression rose.

"I met a lot of incredible men tonight, and I had so many great conversations, but there is one interaction that stood out to me above the rest," Rachel said when it came time to hand out the final rose. "I hope he is as excited to receive the rose as I was."

Bryan certainly was happy to pin that rose on his jacket. The two kissed again — this time with poor, drunk Mofit having the misfortune of witnessing it.

Love The Bachelorette? So do we! Be sure to meet the 2017 cast here, and check out some of their ridiculous occupations here.