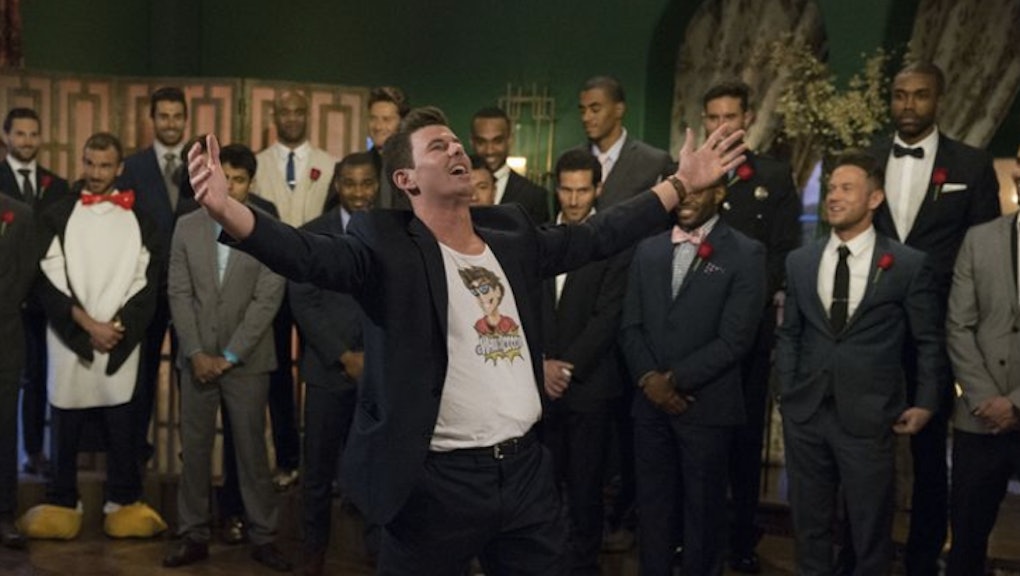 The Bachelorette is supposed to be about one woman's journey to find her soulmate — so why did "Whaboom" guy get a rose during the season 13 premiere?

If you watched the start of Rachel Lindsay's season of The Bachelorette on Monday, then you must know that we're talking about Lucas Yancey. Lucas exited the limo wearing a "#WhaaaBoooom" tank top and proceeded to yell his catchphrase throughout the night. He's clearly on the ABC dating show to market whatever "Whaboom" is, yet Rachel handed him her final rose of the evening.

While viewers at home watched Rachel pin the rose to his jacket, Lucas was promoting his line of #WhaaaBoooom clothing on Twitter — even offering one of his followers the chance to win a signed copy of the shirt.

For a show that always talks about contestants being there for the "right reasons," it's pretty absurd that this guy managed to make it past night one. Does Rachel really find him charming? Or is keeping him a call that Bachelorette producers made to create "drama" in the house?

Well, there is no denying that a feud is brewing between Lucas and aspiring drummer Blake Elarbee.

"He's here to just be on TV," Blake E. tells the cameras at one point. "It's insulting to Rachel and I'm going to call him out."

Blake E. does "question his motives" during the evening.

"I'm not wearing my catchphrase on a shirt," he tells Lucas, who acknowledges that Blake E. has a "good point."

It seems like Lucas entered The Bachelorette with the intent to profit off of it. Is he the first contestant to do so? Certainly not. Previous contestants have admitted to it in the past. But no one has done it so obviously as Lucas and it feels like a slap in the face to viewers.

Week after week we tune in to watch the group of contestants dwindle until the final two. Yes, we love the drama — which is probably why Chad Johnson and his meat plates stuck around JoJo Fletcher's season of The Bachelorette so long. But Lucas is not entertaining. He's on the show for himself. Bachelorette fans — and Rachel — deserve better.

So, I say this to you, Bachelorette producers: If you're trying to sell us a show about love, don't keep around phony people trying to make a quick couple of bucks. Set your leading lady up for success and weed them out on night one. The drama will still come — you have a group of guys competing for one girl, after all.