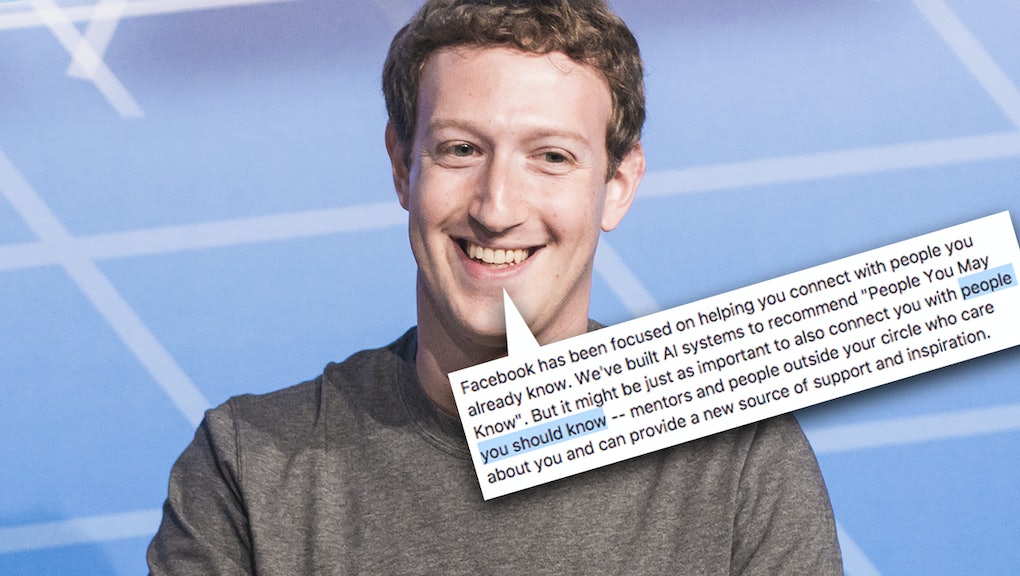 Buried in a massive wall of corporate speak, Mark Zuckerberg revealed the future of Facebook

In a lengthy open letter, buried in lots of corporate technobabble, Mark Zuckerberg hinted at a major change that could be coming to Facebook.

The Facebook CEO has been on a cross-country tour meeting with average Americans as part of his quest to visit all 50 states. On Sunday night, he shared a few ways the trip has changed the way he thinks about Facebook — implicitly suggesting some ways he might reshape user behavior.

The post talks a lot about how our social connections influence our lives and actions. Zuckerberg explains how a person's social network affects nearly every aspect of their life: where they live, the type of job they pursue, the people they meet, the activities they engage in and what they expect out of life.

Now, Zuckerberg says that he wants Facebook to be able to help shape these connections for the better.

This part of the note is worth reading carefully: "Facebook has been focused on helping you connect with people you already know. We've built AI systems to recommend 'people you may know.' But it might be just as important to also connect you with people you should know — mentors and people outside your circle who care about you and can provide a new source of support and inspiration," he wrote.

"If we can just help … people build new positive relationships, that will affect all of us as well. That gives me hope that we can do this."

In other words, the new Facebook could center on forming connections around shared interests, and creating networks outside of the groups that no longer define you — your high school, college or former company, for example. This would mark a radical shift in the way people use Facebook.

For the past 13 years, Facebook's primary goal has been to help users foster a deeper connection with people they know mostly outside of Facebook. The "people you may know" feature denotes exactly that: IRL friends and acquaintances you might want to add.

The new Facebook could center on small, private groups and shared interests — making connections outside of the networks that no longer define you.

Unlike platforms such as Twitter or Instagram, there is no internal discovery mechanism for people who share similar interests, passions or struggles, who are unconnected to your current social graph.

Sure, a few select users will add any random person who sends them a friend request — if they didn't, MTV's hit show Catfish could never exist — but to the majority of Facebook users, friending strangers is a big faux pas.

Facebook does allow you to subscribe to people's public updates without friending them, but this is still ultimately a one-way connection. For a time, the platform also encouraged public figures, business leaders and journalists to set up professional pages where followers keep track of what people were up to. But again, following or liking a page is still a one-way connection.

In his post, Zuckerberg said that he has been looking at support groups such as Alcoholics Anonymous and Narcotics Anonymous for inspiration. These groups rely heavily on forming new social connections based around positive behaviors.

Zuckerberg says he might also like to build a digital version of the Peace Corps to "create service opportunities where people exchange culture and build new relationships."

"This isn't a scientific study and it requires further research, but I think there's something to this idea that your relationships shape your path more than we realize," he wrote.

Zuckerberg's insights into human connections and peer groups are nothing new. Scientists have known for years that our communities and friend networks play a critical role in determining how our lives pan out.

Zuckerberg's insights into human connections and peer groups are nothing new. Scientists have known for years that our communities and friend networks play a critical role in determining how our lives pan out.

"Can't wait till you discover there's such a thing as 'sociology,'" one Facebook user commented on Zuckerberg's post.

Nonetheless, encouraging users to connect directly with people on Facebook who are completely removed from their offline social network could open up the platform in new ways and alter the way people treat Facebook.

Facebook, meanwhile, has become less and less personal as it transforms itself into more of an internet portal than a social network. As I wrote earlier in May, people go on Facebook to engage with content, not people.

The data back this up. Users have been sharing fewer personal updates on the platform over the past few years; even baby photos seem to have a hard time competing with Trump-themed clickbait for prime slots in the News Feed. Products like Facebook's highly anticipated video tab, full of longform shows and premium video content, will only exacerbate this gulf.

Facebook has become less and less personal as it transforms itself into more of an internet portal than a social network.

By adding better people discovery, Facebook could refocus user behavior around building more personal connections from the ground up on the platform, reclaiming its roots as a social network.

Groups will be the gateway

When you ask users what Facebook feature feels most intimate, many will tell you that it's Facebook groups. "I often find more value in a community of strangers than I do in one of friends," CNN Tech's Selena Larson wrote last June in a piece titled "On a social network that is increasingly anti-social, Facebook groups may be our only hope."

She articulates what many users have felt for a long time: that Facebook itself has become a behemoth, and often the simple act of logging on is overwhelming. "Facebook groups are something of a respite from the loud and often overwhelming deluge of information we get on Facebook," she says.

If Mark Zuckerberg truly wants to "help more people build positive relationships with people who expand their sense of possibility," then his goals might best be realized though building out Facebook groups.

There are some signs that this is Zuckerberg's intention. The examples he speaks about in his post, Alcoholics Anonymous and Narcotics Anonymous, are quite literally support groups. Peace Corps volunteers serve in groups as well.

In April, Facebook announced its first ever Communities Summit, where handpicked Facebook group admins will gather and learn about new tools that make it easier for them to facilitate connections within their group communities.

Facebook has even begun testing an update that would encourage users to create a private group for every status update they attempt to post to their timeline. It's ham-handed, but Facebook has never been shy about forcing users to engage with a feature they're pushing.

If Facebook does begin its foray into people discovery, it's likely that the road will be rocky. Facebook was many users' first social network, and younger millennials have all but grown up with it. The amount of data Facebook has on us trumps anything that can be found on Twitter, Pinterest or other social platforms.

Many user profiles still house troves of old photos, quotes and information they expected would be shared only with a close group of people, and despite efforts to simplify them, Facebook's privacy controls are still confusing and difficult to navigate.

If Facebook begins proactively facilitating more connections between people within the platform, it needs to take careful steps not to overexpose users' personal information; it should be explicit about how to customize privacy settings.

Yet, despite the challenges, connecting users to people outside their offline social networks is probably something Facebook should explore.

Facebook must figure out a way to let users build strong and meaningful connections with people far removed from their default social circles — not just for the "public good," as Zuckerberg wrote, but if it wants to remain relevant as a social network.

The most transformative thing about the internet it its ability to connect us with people we don't already know. If Facebook is able to successfully integrate a people-discovery system into its social graph, users from all walks of life would be better served.