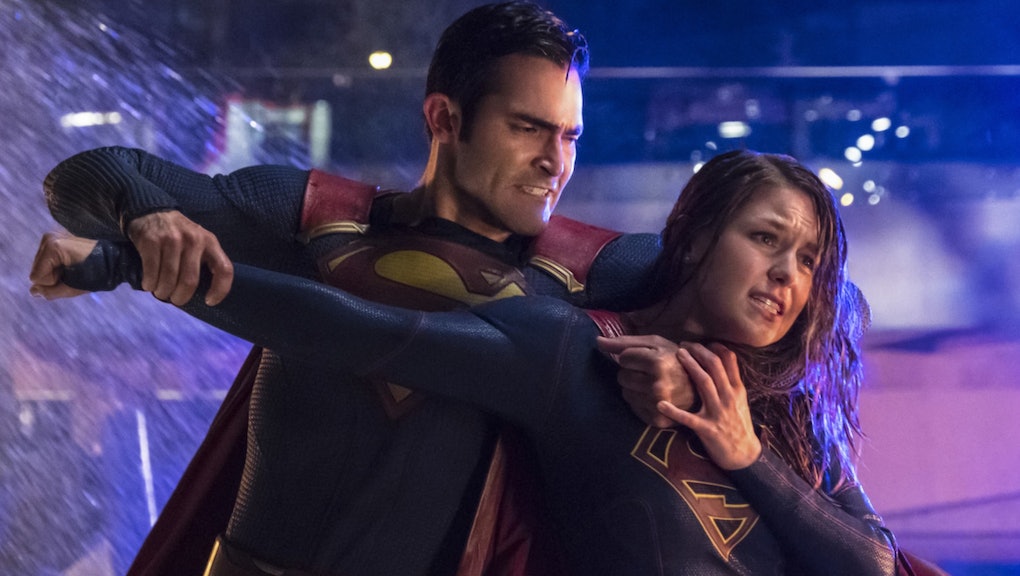 'Supergirl' Season 3: Will the Legion of Superheroes and Doomsday be joining the series?

(Editor's Note: Spoilers ahead for the season two finale of Supergirl.)

On Monday night, Supergirl wrapped up its second season with an action-packed and emotional finale. Beginning right where the season's penultimate episode left off, the finale, titled "Nevertheless, She Persisted," pitted the Girl of Steel against her cousin, Superman, played by Tyler Hoechlin. Poisoned with silver Kryptonite, Superman battled Supergirl under the false belief that he was fighting his worst enemy: General Zod. The fight didn't last very long, and Supergirl comes out on top, even with her cousin fighting at full strength.

With Superman back on the side of good, the two last children of Krypton team up to fend off the Daxamite invasion led by Queen Rhea, played by Lois and Clark: The New Adventures of Superman alum Teri Hatcher. In the end, with Earth's cities nearing destruction, Supergirl agrees to use a device created by the Luthors that would flood the planet's atmosphere with trace amounts of lead, forcing all Daxamites to leave — or die. After the device is activated, most of the Daxamites flee, while Rhea is left to perish. The lead in the atmosphere also forces Kara's boyfriend, Mon-El, to leave the planet.

Following an emotional goodbye, where Kara and Mon-El profess their love for one another, the former prince of Daxam boards his old Kryptonian escape pod and leaves the planet for good. But where does he go? Moments after being shot into space, Mon-El's pod approaches a wormhole-like opening, and disappears into the abyss. And that is just the first of two highly exciting cliffhangers to end Supergirl's second season. So, with speculation sure to be running rampant, let's unpack what could be coming in season three.

The Legion of Superheroes

Much like he does in Supergirl, Mon-El is forced to leave Earth in the comics after suffering from lead poisoning. In the comics, though, he is not shot into space, but rather, is sent into the Phantom Zone. It is not until the 30th century that Mon-El is freed from the Phantom Zone by the Legion of Superheroes. With an antidote created to reverse his lead poisoning, he eventually joins the Legion as one of its most powerful members.

While this has not been officially confirmed, Mon-El's story in Supergirl is similar enough to the comics that it seems very likely that we are headed for some sort of a Legion of Superheroes plot line. In fact, it seems like almost a certainty that on the other side of the wormhole that Mon-El's pod entered, the 30th century and the Legion will be waiting.

What this means for Mon-El's future on Supergirl is uncertain. The Legion of Superheroes frequently time-travel, so it is certainly possible that Mon-El returns to the present as part of the team to help Supergirl fight off some impending threat. Supergirl could also be recruited to the future to help the Legion overcome some danger they are facing. Of course, the Legion could merely be used as a plot device to return Mon-El to Earth with an immunity to lead — though that would seem like a big missed opportunity.

As if the Legion of Superheroes tease was not enough, Supergirl's season two finale ended with one final tag, likely setting up next year's big villain. In a flashback to the day Krypton died, we see Kal-El and then Kara shoot off in their escape pods. Apparently, though, they were not the only ones to escape the doomed planet. We also see what appears to be some sort of Kryptonian cult loading a mysterious crying baby into a pod.

After placing a drop of blood on the crying baby's head, one of the cult members says that "it will grow strong on Earth," later adding, "and then it will reign." So, what does this all mean? Did we just witness Supergirl's origin of Doomsday? The drop of blood on a Kryptonian body is somewhat similar to Doomsday's origin in Batman v Superman, in which Lex Luthor placed a drop of his own blood on General Zod's corpse.

On first glance, the use of the word "reign" seems like an appropriate nod to Doomsday. Two comic book storylines that feature the word also heavily revolve around Doomsday. "Reign of Superman" came shortly after Doomsday killed the Man of Steel in "The Death of Superman," and more recently, "Reign of Doomsday" featured an attack on Earth by several Doomsday clones. On closer inspection, though, it seems that "reign" could actually be a name.

While Doomsday would make one hell of a villain for season three of Supergirl, for the most part, the writers have shied away from pitting Kara against any of Superman's main foes. For example, Lex Luthor has only been mentioned, General Zod is seen merely through Superman's hallucinations and there is no indication that Darkseid (a Superman mainstay) will play a role any time soon (of course there have been exceptions). Rather, Supergirl has generally faced either her own villains, or offshoots of Superman enemies.

Since it is unlikely that season three would break this trend, it would appear that Doomsday will not be heading to National City. Of course, that begs the question of who was in that pod? What we probably have seen is the origin of Reign, a more recent villain of Supergirl in the comics. Reign belongs to a group of aliens known as Worldkillers, and is essentially Supergirl's version of Doomsday.

In the comics, it is explained that Reign, and the other Worldkillers, were created by Kryptonian scientists. That sounds an awful lot like what we saw in the final moments of Supergirl's season finale. And if Reign is coming to Earth, Kara may be in store for the fight of her life.