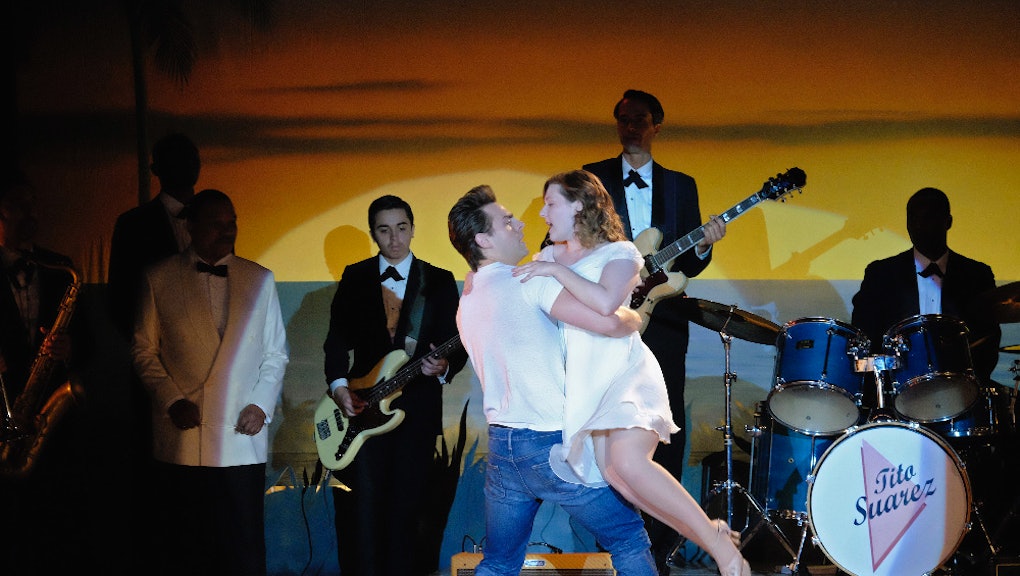 Let's get something out of the way early on: There was absolutely no good reason to remake Dirty Dancing. The 1987 coming-of-age tale remains imperfectly perfect to this day, garnering scores of fans through repeated viewings on basic cable.

But, since the steamy love story has been rebooted in the form of a three-hour musical extravaganza — which aired on Wednesday night on ABC — me being a Dirty Dancing super-fan, I felt compelled to watch. And what I discovered was that the new version commits an unfortunate error that completely goes against its intended message.

When ABC sent out its screener, the accompanying press release touted that this new version of the film told the story "from a fresh perspective, diving deeper into the iconic characters, showcasing their progression and tackling social themes like race, women's rights and the socio-economic division in the country at the time."

Here's the problem with the 2017 Dirty Dancing's attempt at being woke: That's all it was, an attempt. For all its desire to highlight serious issues facing society today — and to do so while being inclusive and mindful of diversity — the film fell flat. There was a burgeoning interracial romance that felt like it was too scared to really take off, and the gender-equality storylines were weak at best. Squeezing in a couple of brief mentions of The Feminine Mystique is not what I would call a worthwhile exploration of feminism.

But most notably, this new version of Dirty Dancing fails to bring the original's inherent Judaism to the forefront.

The 1987 version of Dirty Dancing, directed by Emile Ardolino, stars Jennifer Grey as Baby, the brainy, sheltered physician's daughter who vacations at a mountain resort in the summer of 1963 with her family. In between learning the mambo, the cha-cha and the merengue, she undergoes a sexual awakening courtesy of her wrong-side-of-the-tracks dance instructor, Johnny, played by the late Patrick Swayze.

Now, even back in 1987, the film's Jewish elements were played down. Perhaps it was because producers were trying to appeal to a broader audience, but one of the things I always loved about Dirty Dancing was the fact that it highlighted, however subtly, a part of Jewish culture that was likely unknown outside of a specific area in the United States.

Kellerman's, the setting of the Dirty Dancing story, was a fictional version of the countless Catskill Mountain resorts in upstate New York frequented by Jewish families throughout the 20th century. Eleanor Bergstein, the film's screenwriter, based the story on her own experiences at these vacation meccas.

On a personal note: My parents met at one of these Catskill hotels in a way reminiscent of Baby and Johnny — Mom was a guest, Dad was a busboy. I also stayed at several of these resorts with my family throughout the '80s and '90s shortly before most of them closed down for good.

In the 1987 film, other than a line of dialogue in which owner Max Kellerman — played by Jack Weston — makes a direct mention of the resort's Jewish origins, much of Dirty Dancing's distinctive ethnicity is diminished to vague references, if not removed completely. For those keeping track, at the end of the movie, a nostalgic Max reminisces to his bandleader, Tito Suarez, about "Bubba and Zeyda serving the first pasteurized milk to the boarders" before lamenting the imminent demise of hotels like Kellerman's.

Not only does Max make reference to how many of these swanky Catskills enclaves started out as small boarding houses serving farm-fresh ingredients, but he also uses Yiddish terms when speaking about his grandmother and grandfather.

There are also several examples peppered throughout Dirty Dancing that allow the film to get the point across that these people were Jewish without having to say they were Jewish. Unfortunately, they were, for the most part, lazy stereotypes: The protagonist family's patriarch, Jake Houseman, played by Jerry Orbach, is a doctor. Jane Brucker's portrayal of Baby's older sister Lisa Houseman is arguably a "Jewish American Princess" in the way she kvetches over not bringing enough shoes upon her arrival at Kellerman's. And Kelly Bishop's Marjorie Houseman is a typical Jewish mother in the way she applauds herself for providing her daughter with talent. Of Baby's dancing skills, she observes, "I think she gets this from me."

In the ABC remake, which still takes place in 1963, not only have the Jewish elements been eliminated (the closest we get is an offhand comment in the movie's 1975 epilogue that the now-adult Baby, played by Abigail Breslin, takes a salsa class at the JCC), but there's even a line of dialogue where Katey Sagal's vacationing cougar character makes a "I gave it up for Lent" joke. Considering that Bergstein made a point of ensuring that the original film maintained its Jewish authenticity, to now see Dirty Dancing's unique cultural flavor diluted with Christianity-inspired remarks feels like an insult — at least to me, someone who is both Jewish and a fan of Dirty Dancing.

And that season-ending lament from Max to Tito? Well, it's still in the remake, but all of the Yiddish terms and mentions of the Catskills' early history as a summertime haven for Jews are gone. Instead, it's replaced with Tony Roberts' Max and Billy Dee Williams' Tito acknowledging that cultural changes aren't necessarily a bad thing. They come to this realization as they watch Modern Family's Sarah Hyland, who now plays Lisa, and a new Kellerman's staff character, Marco, played by J. Quinton Johnson, cross racial boundaries to sing Bob Dylan's "Don't Think Twice It's Alright."

And Max and Tito are right: Cultural changes aren't necessarily a bad thing. But even though I was happy to see that this new version of Dirty Dancing attempted to work in a more forward-thinking love story — watered-down as it was — it should not have come at the expense of the film's Jewish essence. For all of ABC's talk of incorporating "social themes" into the remake, why did they ignore the opportunity to explore what the original refused to do?

See, there was a dark side to these elegant, upstate New York hotels with their bountiful meals and endless dance lessons. Anti-Semitism in the United States was an unfortunate fact of life for the first half of the 20th century, which necessitated the existence of "restricted" vacation spots throughout the country. The Catskills' resorts offered an upscale experience — without fear of being turned away. By 1963, though, Max's realization (in the original film) that his resort isn't the hotspot it was perhaps even a decade or two earlier, is on point: Restricted vacation locales were becoming a non-issue — especially starting a year later with the passage of the Civil Rights Act.

None of this is addressed in the remake because instead of seizing the chance to actually make many of the characters Jewish, the creators turned all of the Kellerman's vacationers into a community of innocuous, nondescript white people.

Back in 1987, the late, great movie critic Roger Ebert chastised Dirty Dancing for keeping the word "Jewish" under wraps the way that it did. He suggested that by doing so, it obfuscated the fact that Baby's father very likely didn't approve of Johnny because he was a Gentile: "I guess people who care about such things are supposed to be able to read between the lines, and the great unwashed masses of American moviegoers are condemned to think [Orbach's character] doesn't like Swayze's dirty dancing," Ebert wrote.

What's so upsetting is how 30 years later, this remake, with all its intended preaching about social issues, refused to right those wrongs. Now, not only have the Jewish issues been swept under the rug, but so have the topics of race relations and women's rights. As a result, Ebert's review could've been written today, especially when it comes to this observation:

"This movie could have been about the subjects it pussyfoots around so coyly."